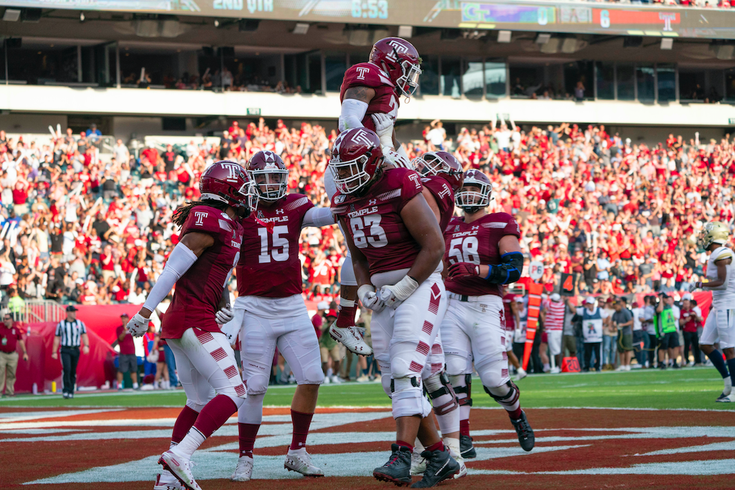 The Temple Owls will continue to play home football games at Lincoln Financial Field through the 2024 season. The university reached an agreement with the Philadelphia Eagles, putting its plans for an on-campus stadium on hold for the foreseeable future.

Temple University has signed a five-year lease extension for its football team to remain at Lincoln Financial Field, marking a shift away from stymied efforts to build an on-campus stadium in North Philadelphia.

The university announced the deal Monday, confirming that the extension includes an additional five-year option. The Owls will remain at the Linc at least through the 2024 season.

“We are thrilled to reach agreement with the Eagles, and we look forward to more home games in the top-quality facility that is Lincoln Financial Field,” Temple University President Richard M. Englert said. “This is a good deal for the Eagles and for the university and our fans, and I appreciate everyone’s hard work in bringing the negotiations to a successful conclusion.”

Temple's original 15-year lease at Lincoln Financial Field expired at the end of the 2017 season. The team declined to sign a 30-year lease in December 2016 after the Eagles doubled the rent to $2 million per year, excluding other event costs. The Owls have remained at the Linc on a pair of one-year deals.

The terms of the new five-year lease were not disclosed.

“We are pleased to extend our agreement with Temple University,” Eagles president Don Smolenski said. “We have enjoyed a great relationship for the past 17 seasons, as our staffs have worked together to make Lincoln Financial Field the home for Temple football. We look forward to continuing that tradition into the future.”

Temple had proposed a $130 million stadium on its main campus, but it was met with staunch community resistance. Students and faculty generally expressed disinterest or opposition to the project, which the university claimed would be funded primarily by private donations and bonds.

To build support for the stadium, the university had pointed to Temple's ascending football program. The Owls have been bowl-eligible in nine of the last 11 seasons and won an American Athletic Conference championship in 2016. Temple also argued that the stadium would be more profitable in the long-run and would enhance the campus atmosphere.

A university official declined to comment when asked how the lease extension affects Temple's efforts to build a stadium. The university formed a Special Services District in North Philadelphia last year in an effort to address some of the community's concerns in the neighborhood, potentially paving the way for Temple to revisit the stadium down the line.