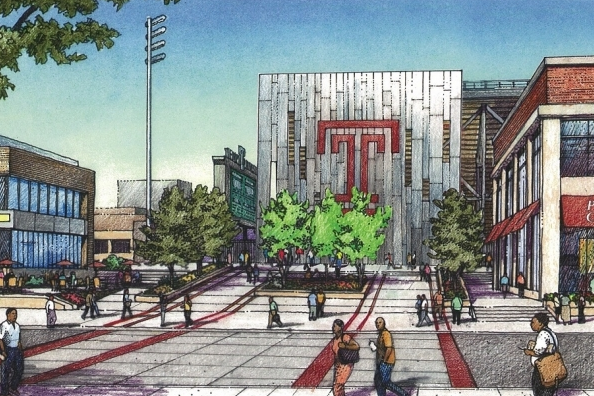 Questions about the proposed 35,000-seat facility, a major source of contention among North Philadelphia neighbors, were sent to the Temple community on April 9.

A total of 4,690 undergraduate, graduate and professional students responded to the survey, representing a combined response rate of 12.42 percent.

Temple has pitched the $130 million multipurpose facility as a campus-enhancing project that would improve student spirit, increase alumni engagement and bring intriguing retail opportunities to the neighborhood. For home games, the university currently leases Lincoln Financial Field from the Philadelphia Eagles, who doubled their annual asking price in 2016, and would prefer to have a stadium that enables them to assume fixed costs for the football program.

Among those who responded to a direct question about whether they support Temple building the on-campus stadium, more than half of students said they did not support the proposal.

The greatest concern reflected in the survey was the impact the proposal will have on the surrounding neighborhood. Seventy percent of percent students ranked this as their most serious reservation about the stadium proposal.

Asked whether having a stadium on campus would increase school spirit, 31 percent of undergraduates who responded said they "strongly agree," representing the highest percent of that group. Another 25 percent said they "strongly disagree," indicating that student sentiment about the project's value to the university community is highly varied.


About 61 percent of survey participants somewhat disagree or strongly disagree that Temple students have a good relationship with their neighbors. The survey was evenly split at 50 percent of combined students who feel Temple is committed to serving its surrounding communities, including North Philadelphia.

Temple faculty have also expressed skepticism about the merits of the proposal, at times questioning both the financial wisdom and community impact of a $130 million stadium. A resolution passed by the Faculty Senate in February urged the university's Board of Trustees to pull back from its project application to the City Planning Commission and present more information to the Temple community and its neighbors.

Of the 2,292 full-time faculty and librarians across the university, 22 percent (495) submitted ballots on the resolution. Among them, 375 supported the resolution, 106 were against it and 14 voted to abstain.

The stadium proposal has been the subject of persistent protests by a coalition of North Philadelphia community groups and student opposition groups ever since it was publicly introduced at the start of 2016. Those against the project say the university has a questionable history of honoring the needs of its neighbors and has not displayed trustworthiness or transparency throughout the research phase of the proposal.

A public town hall event on Temple's campus, led by university president Richard Englert, broke down earlier this year when protesters disrupted a presentation within 10 minutes of the event starting. The university has yet to schedule another event with the community.

Temple did not immediately respond to a request for comment on the results of the student survey.