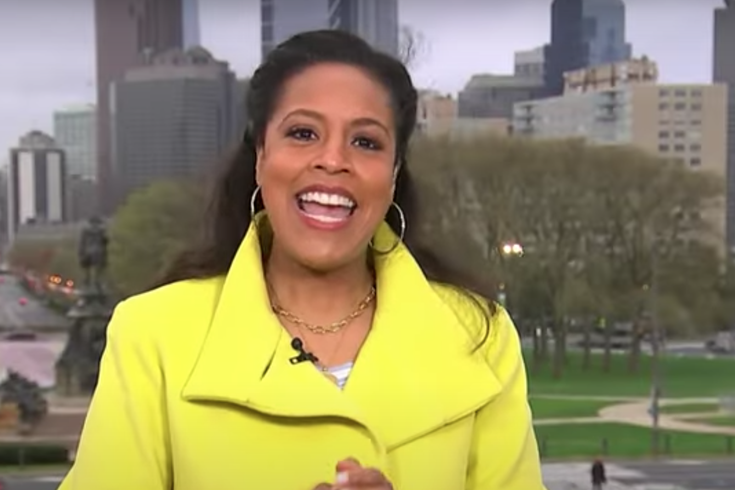 It was all Philadelphia on "Today," as the city was the focus Monday of the NBC morning news program's "Reopening America" series that is highlighting how different areas of the country are trying to recover from the COVID-19 pandemic.

The series was anchored from the Philadelphia Museum of Art by "Today" correspondent Sheinelle Jones, who is a familiar face for many in the Philly region. Born in Philly, Jones was a reporter and anchor for nine years at FOX 29, where she formerly hosted "Good Day Philadelphia."

Jones made her first appearance Monday on "NBC10 News Today," where she previewed what viewers would expect during her package of segments on "Today."

The @todayshow's @SheinelleJones is highlighting the people helping Philadelphia emerge from the coronavirus pandemic. Here's a preview of the Philly stories she's sharing with America all this week! @visitphilly pic.twitter.com/DMyhafpNV3

"Today" kicked off its coverage in Philadelphia with an opening segment that highlighted some ways that the city is trying to return to normal amid the COVID-19 pandemic. Among those included the return of some students to classrooms for in-person learning and a limited number of fans being allowed back at sporting events.

The opening segment also addressed the recent uptick of COVID-19 infections in Philly and the city's coronavirus vaccine distribution plan through interviews with Mayor Jim Kenney and Dr. Ala Stanford, the founder of the Black Doctors COVID-19 Consortium.

Victor Cafe, the popular South Philly Italian restaurant, was highlighted as an example of how small businesses in the city are trying to remain open amid the COVID-19 pandemic. The eatery is well-known for its opera-singing staffers and for serving as the location of Rocky Balboa's restaurant in the sixth installment of the title character's film series.

Kicking off our special series Reopening America TODAY, @SheinelleJones reports from Philadelphia on the city’s plans to reopen safely as a recent surge in COVID-19 cases provides a reminder that the pandemic is far from over. pic.twitter.com/WjM2MdT6SP

"Today" viewers also had the pleasure of receiving a weather forecast from NBC10 meteorologist Glenn "Hurricane" Schwartz, who talked about how he got his famous nickname and why he started wearing his iconic bowties.

The program later turned its attention to highlighting Philly's food scene with some help from musician Patti LaBelle and restaurateur Ben Bynum.

The Philly native LaBelle talked about her favorite restaurants in the city. Among her go-to eateries are Booker's, Relish and Little Delicious, LaBelle said.

Bynum, who owns restaurants such as the aforementioned Relish, Warmdaddy's and South Jazz Kitchen in Philly, discussed how difficult the COVID-19 pandemic has been for eateries across the city.

"For all Philadelphia restaurants, it's been a severe struggle," Bynum said. "We've all had to pivot, all had to adjust and it's been a very trying year. But we're happy that things are turning the curve and things will be opening so we're very excited."

Before the segment ended, Jones recommended Han Dynasty, Sabrina's, Zobra's and El Vez for viewers to eat at when in Philly.

Singer and Philadelphia native Patti LaBelle (@MsPattiPatti) shares her favorite food spots in the city with @SheinelleJones. Plus, Ben Bynum joins us to showcase some of the popular dishes at his local restaurants. pic.twitter.com/cpE1pjHfq3

Jones also interviewed Flyers' president Valerie Camillo about becoming the first female to hold that executive title in NHL history, how she's trying to help other women rise up the ladder in the sports industry and the new additions she has brought to the Wells Fargo Center.

"There are no limits, I think, to what we can do and what our dreams should be," Camillo said. "As little girls, sometimes we have dreams, but we don't really expect that they'll come true. We should expect it. The world is changing. The future is awesome, and the future is now."

Jones' interview with Camillo was also bombarded by a guest appearance from none other than Gritty himself, who skated around the ice at the Wells Fargo Center and presented Jones with her own Flyers jersey.

.@NHLFlyers team president Valerie Camillo is the first woman to serve in that capacity in the NHL. She spoke with @SheinelleJones about making histrory, advice she got from Billie Jean King and her journey to being an executive. pic.twitter.com/j49307Lvt9

One of the last highlights of NBC's "Reopening America" series in Philadelphia was an appearance from musician Daryl Hall. The Philly native and one half of the musical group "Hall & Oates" discussed what he loves most about the city.

"I think my favorite thing to do in Philly is play," Hall said. "I like playing there. There's nothing that beats a Philadelphia audience. Everybody's your cousin or thinks they are or act like they are, and it's fantastic."

We’re super stoked to be in Philly today! @realdarylhall of “Hall & Oates” told us what he loves the most about Philadelphia. Hall, who spent his childhood and college years in the City of Brotherly Love, says “nothing beats a Philadelphia audience.” pic.twitter.com/u5U2wZqrU3

The 42-year-old Jones has hosted "3rd Hour of Today" since 2019. Jones left FOX 29 in 2014 to join NBC, where she has primarily worked as a correspondent and co-anchor on "Today" and "Weekend Today."