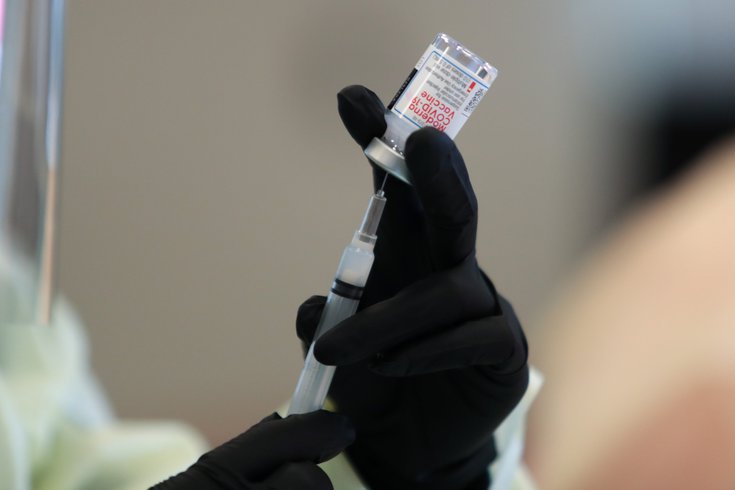 All Philadelphia residents age 16 and over will be eligible to receive a COVID-19 vaccine beginning April 19, in line with new White House recommendations.

Biden is urging all states to make shots available to everyone age 16 and older beginning April 19. The city was set to do so May 1, but officials revised that plan Tuesday.

"The president has provided great leadership on this and when he asks, I think we ought to do what he asks," Philadelphia Health Commissioner Dr. Thomas Farley said.

His advice comes amid a recent surge in COVID-19 cases that particularly has affected adults ages 20-54.

"People who are in their twenties and thirties are probably more likely to get infected, but they generally don't die from this infection," Farley said. "They do very well with this infection. On the other hand, people over the age of 65, if they get the infection, have a serious risk of dying from it."

It's not yet clear how long of a delay there may be to get vaccine appointments after April 19. The city's phase 1C group — covering a broad range of essential workers — will become eligible Monday.

That should provide a brief window to administer shots to many who have been waiting, but Farley said overall appointment demand across different providers, from mass clinics to pharmacies, has ebbed and flowed.

"In general, at our vaccination sites, we're finding that most of the appointments are filled," Farley said. "But the organizations running them say that they have to work harder than they did before to fill them. The demand has softened a little bit and we don't know how big of a pool will arrive on April 19. I imagine it will be difficult at first for people to get an appointment."

Farley added that it's hard to put an amount of time on how long younger people should wait beyond April 19 to get vaccinated.

"I think we're going to have to monitor how in-demand the appointments are," Farley said. "If we're finding that there are open appointments, then I can say at a press conference, 'Our appointments are open, everybody come on down now.' If I say there's a long waiting line, with many people we simply can't accommodate, then they should probably wait a couple of weeks."

Philadelphia's vaccine supply is gradually increasing, but city officials have received no promises that a huge increase is on the way.

Two weeks ago, the city received more than 122,000 shots from all providers — a record high. That included about 40,000 doses from the FEMA clinic in Center City.

As of Monday night, the city had administered about 556,000 first doses. Approximately 318,000 people are now fully vaccinated. Roughly 25% of Philadelphia residents have had at least one shot, a rate Farley said is likely an underestimate.

The difference comes from city dwellers getting their shots in other locations in Pennsylvania, which shares more complete data with the CDC. Philadelphia also vaccinates many people who come from other locations, which partly explains why the city's vaccination rate does not necessarily reflect the total number of doses administered, Farley said.

A second FEMA clinic in North Philadelphia is on track to open Friday and will run for an eight-week period. The city must use its own vaccine supply for this clinic — unlike the one in Center City, which is federally supplied — and has allocated about 23,000 doses of the Johnson & Johnson vaccine to cover the first two weeks. The site will vaccinate 1,000-2,500 people per day and will be open for both appointments and walk-ups.

FEMA's Center City site is in the final week of administering second doses. During the next two weeks, it will administer the single-dose Johnson & Johnson vaccine.

Farley said the city remains in discussions to see whether that site can be extended, but its future remains unknown. He acknowledged the site — and the federal supply that comes with it – has played a big role in increasing Philadelphia's vaccinations.

"We certainly want the site to be able to stay open — that would require getting the personnel and the vaccine," Farley said. "It would be a setback if we could not extend it."

Still, Farley said he believes it will be possible for Philadelphia to get everyone vaccinated by the end of June.

"I think we can probably get there without that site, but the sooner we vaccinate people, the better," Farley said. "Especially with case rates rising as they are now."

To encourage seniors to get vaccinated, the health department will hold walk-up hours on Wednesdays at three clinics:

These sites will be open between 8 a.m. and 4 p.m. and will utilize Johnson & Johnson vaccines, administering about 50 per day.

Philadelphia reported 700 new COVID-19 cases Tuesday, bringing the total to 126,759 since the start of the pandemic.

"Those numbers have roughly doubled in the past six weeks," Farley said.

The factors most responsible for the rising case counts have been debated. But the presence of variants seems to be an important piece of the equation.

"I would say, increasingly, that the variants are playing a role in driving up dates right now," Farley said. "I don't know how much of that is causing the increase versus people just traveling around more and exposing other people. But I would say the variants are definitely playing a role. Fortunately, the vaccine protects against these variants as well, so we still have the right approach — to get people vaccinated as quickly as possible."

COVID-19 hospitalizations also have been rising in recent weeks, hitting 490 across the city Tuesday.

Farley is watching death rates closely to gauge how much the increase in cases is causing fatalities and how much vaccination may be limiting the number of people who die. There is generally a period of a few weeks between getting sick and dying, and then another three weeks before the city actually learns of deaths.

"It could be that we don't know yet about the deaths that have occurred with this wave," Farley said. "Alternatively, it could be that the vaccine is preventing those deaths. I'm watching that number very closely and looking at the ratio of cases three weeks ago to deaths this week. If that ratio is high, that's a sign the vaccine is working. It's just too early to say."

Given the high rates of infection in the city, Farley maintained that Philadelphia will not ease additional restrictions on restaurants and bars — as the rest of the state did this week — until at least the end of April.

"We're not going to allow that to happen in Philadelphia," Farley said. "We're too concerned about the risk in restaurants and bars, which we know are very high-risk settings."