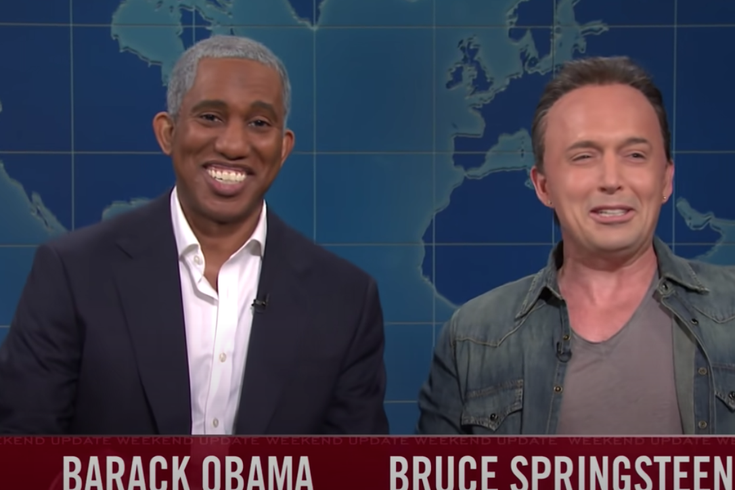 The "Weekend Update" segment on "Saturday Night Live" poked some fun at Bruce Springsteen and Taylor Swift on this week's episode of the sketch comedy show.

Hosted by cast members Michael Che and Colin Jost, "Weekend Update" had both Springsteen and former President Barack Obama on to talk about their Spotify podcast "Renegades" and their friendship.

Except it wasn't the actual former president and musician. Chris Redd played the role of Obama, while Beck Bennett parodied Springsteen.

Bennett's portrayal of Springsteen was pretty accurate and spot-on. He was dressed head-to-toe in the typical Springsteen attire: jean jacket, t-shirt, bracelets, earrings and hair combed back.

Bennett also made similar facial expressions as Springsteen and impersonated the musician's rough voice that can be difficult to understand at times.

"It goes down easy," Beck's character said when asked by Che about his podcast with Obama. "Just two friends having a conversation. It's electric."

Che was surprised that Obama and Springsteen are friends and could have a podcast together, which prompted both Redd and Bennett to break into a mock conversation of what the two men typically discuss during an episode.

The parody conversation, or "riff" as Redd and Bennett's characters constantly referred to it as, lacked much in substance and was pretty much small talk, other than an "off the cuff" discussion about Sprite.

Che was unimpressed by their discussion, saying that it was no different than two random guys talking.

Che mentioned Swift's re-recorded "Fearless" album during the headlines portion of "Weekend Update," specifically highlighting that Swift was 18 years old when she recorded the original version. The new version of the album was released Friday.

"Wow that's impressive," Che said. "Because if I released an album of things I wrote when I was 18, I would be fired immediately."

Actress Carey Mulligan was the sketch comedy show's host and Kid Cudi was the musical guest this weekend.

Full episodes of SNL can be watched on YouTube and Peacock, NBCUniversal's streaming service.