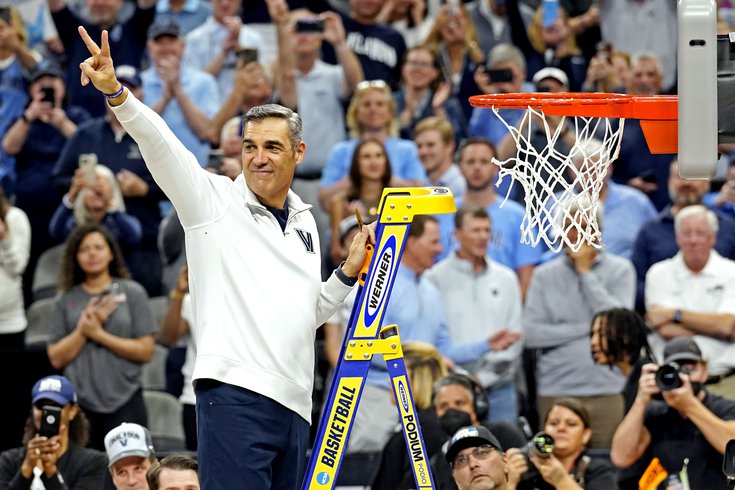 Jay Wright cuts down the nets after Villanova beats Houston to win the South Regional.

Down to four. How long will this run by Villanova last? We will examine that and any possible way to make money off the local Cats – even if this is their final run. Not having Justin Moore will certainly impact their chances against Kansas. We also have one of the most anticipated sporting events over the past two decades. Duke and UNC square off for the first time ever in the tournament in what could be the final game for Coach K. The long history between these two teams culminates with this game, filled with tons of drama – including a recent revenge angle of Duke’s last regular season game.

Let’s look at each game and a couple of different betting angles, as cashing tickets remains the top priority. One strategy to look at would be building a futures ladder on any of the four remaining teams. I’ll explain in more detail with each game, but if you like Duke to beat UNC and the winner of the other game, it’s worth putting money on them to win it all right now.

Without Moore this game becomes exponentially more difficult to win. It might be tough for the Cats to even keep up. This is not due to a lack of talent, rather a lack of bodies. Nova has been going six-deep for most of the tournament and might only play five guys for most of this game. Don’t be shocked to see one or two kids play the entire game. That works against teams not named Kansas. The Jayhawks have depth and athletic height – two major areas of weakness for Nova. The total is telling as the number is in the low 130s (132.5 at the time) despite Villanova wanting to play at a slow pace. The spread is insanely favorable to Kansas as they can pull away at any moment.

Jay Wright is a better coach than Bill Self, but I just don’t know how much it will matter at the end of the night. If Wright can scheme his way to a victory, this would be the most impressive tournament win in his career – yes, I know he won two titles – but the circumstances around this one would be staggering. Kansas can play at a slower pace but doesn’t need to in order to win, like their opponent. The Jayhawks will probably want to force Nova into a track meet – at the very least to wear down a shallow rotation.

The other bet is going under Villanova’s team total. DraftKings currently has the number at 64.5 points which is a little too high. Nova will either struggle to get points in a rough loss to Kansas or beat the Jayhawks by slowing the pace down to a crawl. The likelihood of the Cats dropping 75 on Kansas with five players is low enough to fade on this bet. This is taking advantage of circumstances surrounding this game, like lack of depth for a team that has its best success in lower scoring games.

So much drama. The final game for a legend? Revenge for upstaging the legend’s final home game? Just the history alone between these two rivals is remarkable, let alone what it would do for Hubert Davis if he knocked off Coach K in two straight appearances, and the magnitude of those games. But this is a betting column, and I don’t trust anything as far as I can throw it when it comes to this line. I have no choice but to take Duke, simply out of concern that the narrative just doesn’t die in this game. I don’t trust the refs' whistles if this one is coming down to the wire, not because the game is corrupt, but this collective “want” by the game to keep Duke alive.

Before you stop me on some wacky conspiracy theory, just think how many times one of our own teams got screwed over by a ridiculous call – and that was not in a NCAA tournament game taking on Duke. Bad calls, missed calls, egregious mistakes, all made over the course of any game by any official. Adding this heightened level of drama and scrutiny won’t change that. Plus, if you like narratives, how about revenge from destroying what should have been the final regular season send-off for an all-time great?

Duke has the talent to beat the Tar Heels, but they also have the extra motivation in this game. UNC can’t play the underdog mentality here; they can’t ask the same questions Shaheen Holloway was asking with Saint Peter's. Nope, Davis and his kids have a huge target on their back for what they did to Duke in Durham.

Do you forget the advice given to Elaine by the cabbie in "The Scofflaw" episode? “Good. Revenge is very good.”