Saint Peter's falls in Philly, but their run will always be remembered 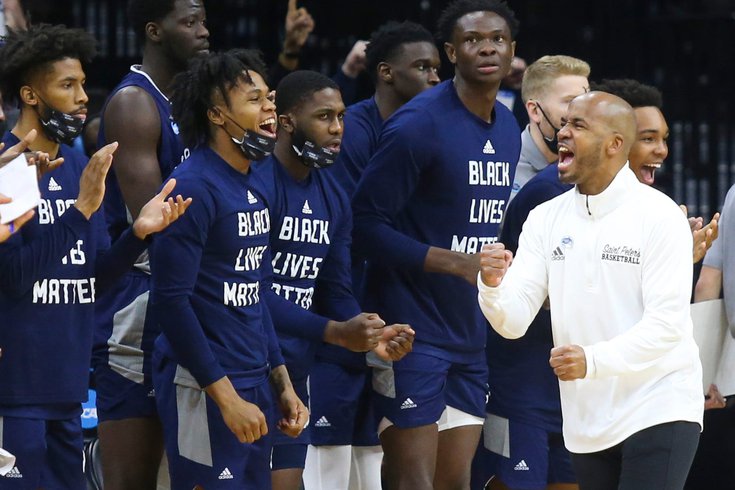 North Carolina was booed as their starters were announced. Saint Peter's was cheered as if they were longtime Philadelphia staples. Somehow, those alumni, students and family from North Jersey who had not come close to tasting even the slightest sliver of athletic success previously owned the crowd at an Elite Eight game in South Philadelphia.

The clock, however, struck midnight and the Peacocks turned back into the Pumpkins. The wildest Cinderella run in NCAA Tournament history came to an end with their 69-49 loss to the Tar Heels. Hey, even Rocky lost his first fight with Apollo. It happens.

The vibes Saint Peter's cultivated in their unprecedented tourney run are still wild even with the loss. No one reading this story ever thought that the Wells Fargo Center would erupt with cheers as if Allen Iverson just hit a poor fool with a crossover when Peacocks guard Doug Edert forced a jump ball and Saint Peter's came away with the possession early in the game. That's how things played out for the Peacocks over the weekend.

Saint Peter's fans took over Xfinity Live! on Friday, made their North Jersey presence felt and did so again on Sunday. The Peacocks got on the good side of Philadelphians, which is a bit of a hard task to say the least. They added a welcomed wrinkle into the puzzle of who would land in the Final Four. It'll be three of the winningest programs in history in Kansas, Duke and North Carolina, plus Villanova, who's essentially a 21st-century blueblood at this point. The NCAA will love the ratings those matchups produce, but the plucky energy of the Peacocks would've been a lovable twist.

For a brief moment, they were adopted as Philly's own. Perhaps losing is the most Philadelphia thing they could've done, but the Peacocks getting bounced does nothing to diminish what their players accomplished and how they'll be remembered both in Philly and in the wider college basketball world.

They didn't get to cut down the nets, but the question of, "Remember that Saint Peter's team?" will fill barroom discussions and group chats for years to come. The names and final scores will fade from memory, but the fact that they upset perhaps the biggest program in college hoops history in Kentucky and then beat Purdue in the Sweet 16 in front of a rabid Philly crowd assuredly won't.

Saint Peter's was quirky, unexpected and undeniably entertaining. Edert will be a meme for the rest of 2022. North Philly's own Clarence Rupert, a freshman forward, dazzled and showcased that he could make the team a tournament threat for the next few years. Head coach Shaheen Holloway feels destined for greatness at a power conference school. Their mascot's a peacock!

The NCAA Tournament will return to Philadelphia again in 2026 when it hosts the first round. I can't fathom any storyline having as much juice then as the one the Peacocks crafted over the last couple of days.