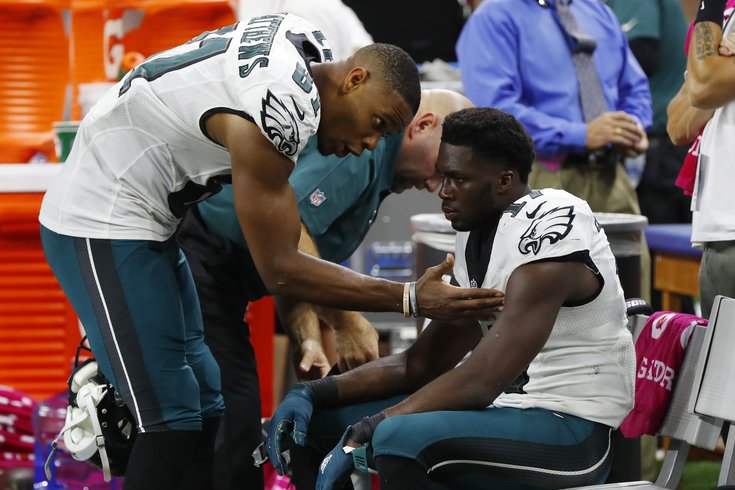 Nelson Agholor is becoming something of a Private Pyle for the Eagles.

With under two minutes to go in the first half against the Washington Redskins last season, the Philadelphia Eagles were driving, when Sam Bradford found Zach Ertz for an 11-yard touchdown pass.

Except, in the words of referee Jerome Boger, "Illegal formation, offense, number 17 covered up the tight end on the formation. Five-yard penalty, re-play first down."

On that play, Nelson Agholor needed to be off of the line of scrimmage, but he was too far up and didn't check with the side judge until the ball was being snapped, shown below. In fact, he's late in running his route because he's checking with the official as the ball is being snapped.

That drive would stall, and Caleb Sturgis would miss a 33-yard field goal attempt. As he did last Sunday in Seattle when he couldn't get lined up properly, Agholor cost the Eagles at least six points. In his first two years, Agholor has cost the Eagles two touchdowns on illegal formation penalties, while scoring only two touchdowns himself.

The Eagles would end up losing that game 23-20.

During the Chip Kelly era, the Eagles got up to the line and ran plays as quickly as possible, adding some level of probability to infractions such as illegal formation. This season, with a much slower-paced offense, those errors should not continue.

In the locker room after the game in Seattle, Eagles wide receiver Jordan Matthews spoke for almost 15 minutes, largely about Agholor. While he tried his hardest to be positive about his teammate, he couldn't help but acknowledge that not being lined up correctly is an unacceptable offense.

"If you're asking if it's inexcusable, then of course," he said. "We're not going to make excuses for that. Of course. We're huddling up and we're calling plays, we can't be having mistakes. That's the honest truth."

Matthews added that Doug Pederson told him that he should be getting the other wide receivers lined up properly before the snap.

"Coach Pederson was just like, 'You know, Jordan, you're the leader, so you need to always be on alert. You make sure you look at the referee and see if we're legal. Don't assume that the guys are lined up right. You always make sure.' Because I'm inside, a lot of times I do look outside to make sure we got it, and so I was like, 'Yeah, you're right. I gotta put that on myself to always make sure those guys are getting lined up.'"

A receiver making sure the other receivers are lined up correctly is akin to Private Joker helping Private Pyle get dressed in the morning in the movie Full Metal Jacket. Sources could not confirm if Agholor is hiding jelly donuts in his lock box.