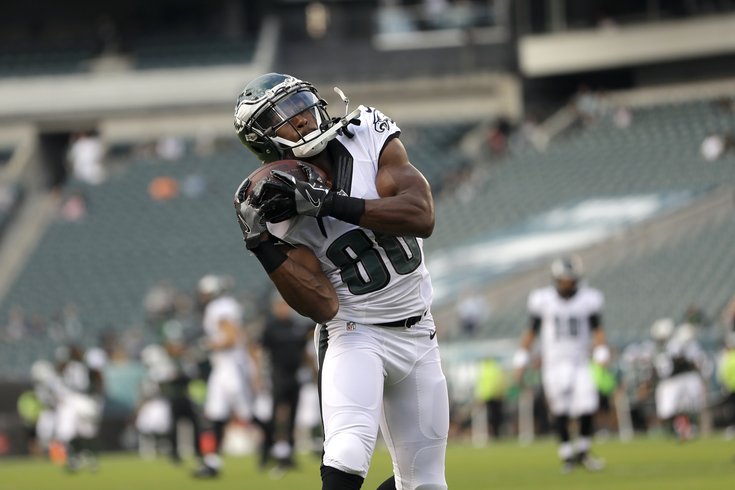 The Philadelphia Eagles have added preseason standout Paul Turner to their roster.

Of course you do. He's the wide receiver you, along with the majority of Eagles fans, were hoping would make the 53-man roster out of training camp following a strong preseason, only to be relegated to the practice squad for the first 11 weeks of the regular season.

During his day-after press conference, head coach Doug Pederson announced that the Eagles have released cornerback Aaron Grimes in order to free up the roster spot to sign Turner.

The 23-year-old undrafted rookie out of Louisiana Tech caught 17 passes for 165 yards in four preseason games – and returned a punt for a touchdown against the Jets. More impressive was his ability to catch the ball, an issue that has plagued the Eagles receivers this season and carried over from 2015.

And he didn't even need two hands...

That, combined with how he's played in practice, was enough to warrant a roster spot.

"He's done well. You know, gosh, he's made plays on service team, going against our defense," Pederson said when asked how he's looked since we last saw him in the preseason finale. "A lot of times when you're going against starters in practice, you get a good look at your young players that way, and he's done a nice job.

"Even last week in practice, we were able to kind of interject him into some of our offensive practice work and see where he's at. He's obviously a sharp kid and [we’re] looking forward to giving him some more time this week. "

According to Pederson, this move doesn't have anything to do with his wideouts' recent struggles, specifically those of Nelson Agholor, who had arguably his worst game as an Eagle to date against the Seahawks on Sunday.

"Right now, with some of the injuries that we have at other spots, we're constantly – and I'm constantly – evaluating the roster and just kind of seeing where we are there," Pederson said. "We gave him some work last week in practice and just feel like this is a good opportunity now, not only for him but for us to see where he's at, see what he can do and give him an opportunity.

"So we'll give him some work this week and then we'll make a decision whether he'll be up [for the Packers game] or not later in the week. "

You know, sometimes – and this is just me speaking – it's not a decision by any means, but sometimes you have to take a step back in order to go forward.

Will he be taking practice reps away from starting receivers Jordan Matthews, Dorial Green-Beckham and Agholor?

"Well, we still have the four [Matthews, DGB, Agholor, and Bryce Treggs], and then we'll interject PT – Paul Turner – and much like we did last week," Pederson said. "We just kind of got everybody equal opportunity in there. So Nelson will be a part of that, and then, again, I'll evaluate it later in the week."

Part of the reason the Eagles waited until now to add Turner to the roster could be because he plans to limit Agholor's role – or, perhaps, bench him entirely – against the Packers.

Sure, his play has warranted criticism, but Pederson believes a move like this would not be a punishment, but rather a chance for the reeling wideout to clear his head. After all, he admitted on Sunday night that his struggles start between his ears.

"I will definitely have a conversation with Nelson, and I'll address that as we get later into the week," Pederson said. "But those are definitely concerns that I have, now that he’s obviously come out and said that publicly. My concern is for him as an individual, as a person, and I want to make sure that he's in a good spot.

"Hey, listen, put football aside; we all know about that. But I want to make sure that he, as a person, is doing good, so we'll have that conversation during the week."

As a former player, Pederson can relate to Agholor's struggles. And he believes that taking "a step back" could actually benefit the second-year receiver.

"You know, sometimes – and this is just me speaking – it's not a decision by any means, but sometimes you have to take a step back in order to go forward," he said. "Sometimes that can help clear your head. You know, I remember as a quarterback back in 1999 when Andy [Reid] pulled me out and put Donovan [McNabb] in, it was a step back to possibly go forward, and to see it differently.

"In that way, too, you can begin to clear your head and see it where you don't have the pressure of performing on you, all the time."

But as of now, Pederson isn't ready to make a decision on Agholor's status against the Packers.

Right now, it doesn't seem like the 20th-overall pick from last year's draft is in a good place.

"It's all speculation, obviously, but I think sometimes as athletes, you put so much pressure on yourself to perform," Pederson said. "Then when it maybe doesn't quite work out in your favor, [the] outside influences, i.e., the media and fans, put more pressure on you to perform [because] you're a top pick and you need to perform. All that pressure on a player is not good.