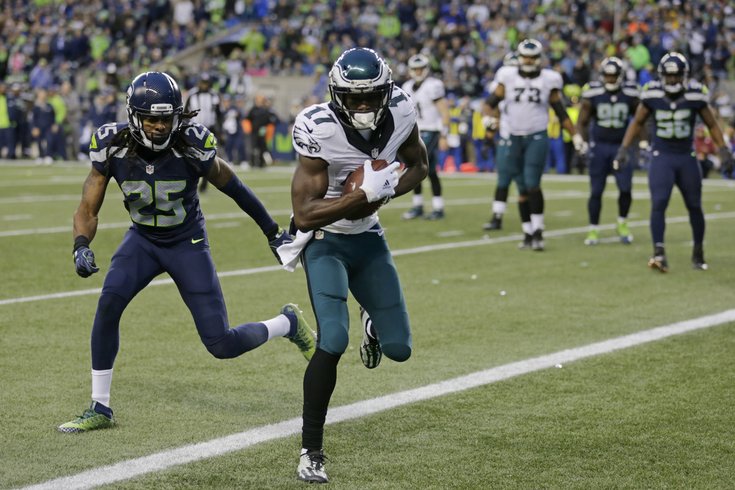 Philadelphia Eagles wideout Nelson Agholor makes his only reception of the day on a meaningless two-point conversion in the fourth quarter.

There’s no way of knowing what the outcome of Sunday’s 26-15 loss to the Seattle Seahawks would have been if Nelson Agholor took one step forward before the ball was snapped.

Instead, the Eagles second-year wideout was not at the line of scrimmage on the 52-yard touchdown pass to Zach Ertz that would’ve put his team ahead 14-13.

And because he wasn’t properly lined up — he said after the game that he thought he was but should’ve checked with the official — the play was negated by an illegal formation penalty, which led to a punt and a Seattle field goal on the ensuing drive.

“We didn’t have enough guys on the line of scrimmage,” head coach Doug Pederson said after the game. “Obviously a big play that negated a touchdown. Hurt us in that situation. We just have to be a little more aware in those situations and make sure those guys are in their proper formations.”

Wide receivers coach Greg Lewis wasn’t quite as even-keeled when Agholor came to the sidelines following the drive.

“He was disappointed, just like I was because that was a big play,” Agholor said of his sideline interaction with Lewis. “Mental errors like that, you can’t have. I know better than that and I shouldn’t have done that.”

But he did it. And that play turned out to be a crucial turning point in the game.

“It’s definitely a momentum changer,” Pederson said. “It puts you right back into the football game. It’s tough to overcome, sometimes. This is obviously a tremendous football team and place, and it’s loud. … But I’ve got to continue to do my part and coach better.”

Funny Pederson should mention that because he went on to admit that the Eagles sideline was aware that Agholor was lined up incorrectly prior to the snap but decided not to call a timeout.

“It’s a little bit of him, a little bit of the quarterback, a little bit of me,” he said when asked who was at fault. “I’ve got to make sure that everybody understands situational football, and formations, and the types of things we do. We just have to coach that better.”

But with the way Agholor struggled throughout this game, only so much of the blame can be placed anywhere else.

On the opening play of the next drive, this happened.

Agholor wasn’t out on the field for the following Eagles’ series, and although he would return before too long, his day never really got much better. He finished with no receptions on three targets — although he did haul in a late two-point conversion.

After the game, Agholor put the blame on himself.

“I’ve just got to get out of my own head,” Agholor said. “I’m pressing so much and I’m worried about so many things, I’ve just got to go out there and try to catch the ball like this [with my body] and not with my hands. Because I’m thinking too much. I’m so worried. It’s such a selfish thing that I need to stop. I need to give my energy to my teammates and this organization, and not myself. And not feeling so pressured to make every single [catch] and just have fun.”

That kind of thinking can often make things worse, as the player buries himself beneath an avalanche of self-doubt. But Pederson seems to think the only way to get Agholor on track is by keeping him involved in their gameplan moving forward.

“Any time a player goes through a rough spell, yes, it can play on the psyche of the player,” the rookie coach said. “From my standpoint as a coach, I need to keep putting him out there, keep trusting, keep encouraging, keep working, and keep fighting because he’s part of our team, and we’ve got to keep plugging away.

“He’s got to fight through it, he’s got to learn to not listen to the outside world, and just focus on the internal and focus on getting better.”

For starters, his quarterback still has his back.

“When that happens, it’s tough but you move on," Carson Wentz said. "Obviously any time you leave plays out there, it’s frustrating, but I’m coming right back to him on the next play."

This is where it needs to again be pointed out that Wentz did go back to him on the next play -- it was an incompletion -- and on the first play of the next drive -- don't tell me you forgot about the drop we showed you earlier. They were both incompletions.

Despite that, he's not giving up on the team's 20th-overall pick from a year ago.

“I’m going to keep encouraging the kid,” Pederson said. “He works hard every single day now. I’m going to keep talking, keep loving on him, encouraging him. By no means am I going to be down on him. This loss today, this was on me. I’ve got to make sure I’m doing everything I can to get these guys ready to play.”

As for Agholor, he agrees that the best thing for him is to keep moving forward and not a week on the bench.

“At the end of the day, right now, I still have a responsibility to my team,” Agholor added. “I need to make sure I continue to practice harder and focus on making those plays. But there’s other things I need to do when I’m out there to help this team win football games. I need to do those at a high level and pick up everything else in terms of my mental approach as well.”

But they’re just words. Agholor needs to start putting those words into action or else he may soon find himself without a job.