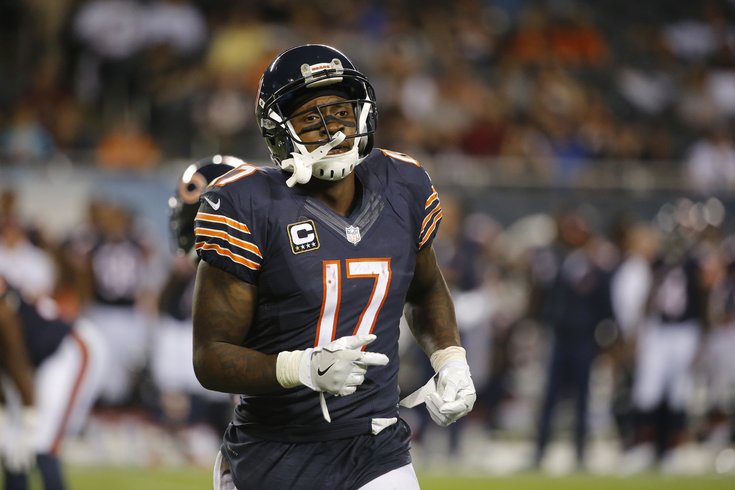 Alshon Jeffery would make a lot of sense for the Eagles, but he'll cost a lot, even after being suspended for four games this season.

In case you haven't seen a single Philadelphia Eagles game this season, allow me to point out the most obvious observation one could possibly make – the Eagles' receivers aren't good. #Analysis.

Every Saturday, we analyze five college players who could make sense for the Eagles in the 2017 NFL Draft in our Grocery Shopping series. Of the 65 players we have profiled so far, 12 are wide receivers. While I like to take an early look at draft prospects because there are so many of them, I typically do not look too far ahead to current NFL players whose contracts are expiring at the end of the season.

In this case, I'll make an exception. The Eagles are going to sign a receiver (maybe multiple receivers) in free agency out of sheer necessity next offseason. While they could certainly draft a receiver, they need some level of competency from a veteran player who can help immediately. Last offseason, the Eagles took a "half-measure" approach to the position in free agency, when they signed Reuben Randle, Chris Givens, and T.J. Graham, hoping that one of the three could shake off previous disappointing seasons with their original teams and begin to live up to their potential in a new environment. That did not happen.

This year, the Eagles will need to take more of a "full-measure" approach to free agency at wide receiver, again, because they really have no choice not to. Here are some players who could make sense:

The Bears franchise-tagged Jeffery last offseason, which cost Chicago $14,599,000 this season to retain him. (That number is now smaller due to Jeffery's suspension for violating the league's policy on performance enhancing drugs). If the Bears tag him again, that would cost them 120 percent of his previous year's salary, or $17,518,800. While Chicago is likely to make a strong play to keep Jeffery, I can't see them using the franchise tag on him at that number.

Jeffery is a legitimate "No. 1 receiver." Over his last four seasons, he is averaging just under 80 receiving yards per game. He's a big target in the red zone at 6'3, 218, and he does a great job on 50-50 balls down the field. Jeffery would give the Eagles' passing offense and instant and significant boost, but he's going to cost a boatload, even with his suspension.

Smith fits the profile of a deep threat the Eagles are seeking to add, hence their interest in him near the trade deadline. He ran a 4.41 at the 2011 NFL Combine and has a 17.2-yards per catch average over his career. However, unlike Randle, Givens, and Graham, Smith has actual NFL production, having amassed 4,453 career receiving yards and 36 career TDs.

The Eagles don't currently have a deep threat opposing defenses have to respect. Smith could be a good fit for the Eagles' offense, giving Carson Wentz a legit vertical option in the passing game, while also opening things up underneath for players like Jordan Matthews, Zach Ertz, and Darren Sproles.

In his first full season as a receiver, Pryor has been really good, catching 56 passes for 724 yards and 4 TDs in Cleveland's dumpster fire offense, and he's only going to get better.

Unfortunately, as one of Cleveland's only good players, he is (in my opinion) a no-brainer franchise tag option for the Browns, should they need it.

Goodwin is a speed guy, not totally unlike Chris Givens and T.J. Graham, who has more potential than actual production. Over his four-year career, Goodwin has 38 catches for 665 yards (17.5 YPC), and 6 TDs. That said, Goodwin is a track star who ran a blistering 4.27 40 at the 2012 NFL Combine. His speed is on a whole different level from Givens or Graham.

Goodwin would be another "half-measure," but certainly an intriguing one.

Josh Huff wasn't exactly the most effective wide receiver, but the Eagles really tried to utilize his skill set before he was released. Like Huff, Patterson is an unrefined route runner but can do damage with the ball in his hands once he gets it. He is also an elite kick returner, as he has five kick return touchdowns through his first four years in the pros. Patterson would essentially be a souped-up Huff.

The Vikings opted not to use their fifth-year option on Patterson last offseason, which will allow him to explore free agency this offseason.

In a conference call with Philadelphia reporters earlier this season, Jackson left the door open for a return to the Eagles, noting that his distaste was for Chip Kelly, not the city or the organization.

On paper, Jackson's numbers don't look very impressive so far this season, as he has just 34 receptions for 467 yards, and two touchdowns, which would put him on pace for 60-830-4. However, Redskins quarterback Kirk Cousins has missed an open Jackson on several occasions this season, squandering opportunities for big plays.

Jackson turns 30 in December, but he can still run and would, of course, fit the speed receiver profile if a reunion wouldn't be too awkward. The Eagles would just have to be careful not to commit too far down the road, as Jackson's usefulness will likely fall off a cliff once he loses his speed, unlike other older receivers who can adapt.

Wheaton's career was on an upward trajectory heading into the 2016 season:

However, he had a lingering shoulder injury this season and was placed on IR. Earlier this season, Wheaton was benched in the second half of the Steelers' game against the Eagles, when he dropped two passes in the first half. The Eagles would have to be comfortable with Wheaton's shoulder if they were to try to sign him, but he's a young player who would be an upgrade over the Eagles' outside options.

The Steelers already have plenty of talent at wide receiver, with Antonio Brown, Sammie Coates, and Eli Rogers all in the fold. They also still hold the rights to the suspended Martavis Bryant, so Wheaton should be available.