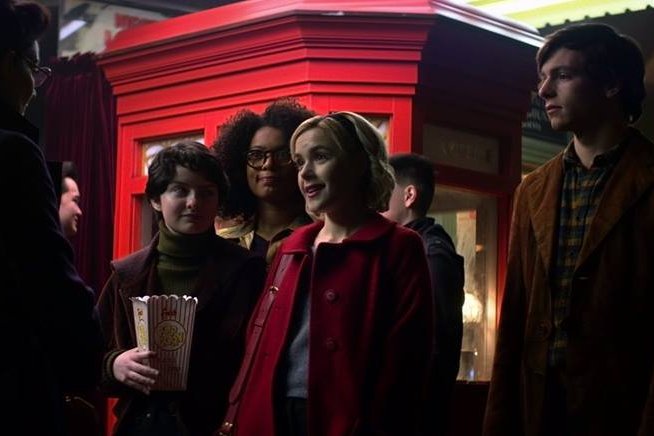 "The Chilling Adventures of Sabrina" premieres Oct. 26 on Netflix.

“The Chilling Adventures of Sabrina” captures darker, more horrific frills of the famed "Archie" comics. With a witches' blessing from the original cast of "Sabrina, the Teenage Witch," the show was never more ready to premiere than it was today.

In the Netflix original series new episode, this new Sabrina takes us down a dark path in the forest and questions what it means to choose.

Set in the 1960s, Sabrina is concerned about her fate and what's to come as a witch. Orphaned from a young age, Sabrina is a half witch on her father’s side, living with her two aunts Hilda (Lucy Davis, "Wonder Woman") and Zelda (Miranda Otta, "Homeland.").

Her dark baptism is upon her for her 16th birthday. On this day she will sign her name into the "Witches' Book," becoming a member of the Church of the Night, a.k.a. Satan's servant.

Once she is baptized, she will then be transferred from Baxter High to the Unseen Academy of the Dark Arts, never to speak to mortals again. But this is difficult for Sabrina to reconcile, considering she is half mortal and very in love with her mortal boyfriend, Harvey Kinkle.

In a glimpse of normalcy, we see Sabrina with Harvey and friends, Suzie and Ros, enjoying a horror film fest at their local movie theater. But what starts as normal becomes ... well, kind of intense.

Sabrina’s teacher, Ms. Wardwell is killed by a witch who then possesses her so she can follow Sabrina, watching her every move on behalf of the Dark Lord's wishes.

The show has some serious cute moments despite all the horror. Harvey dropping off Sabrina, telling her loves her, and watching Sabrina dance off into the house to "Be My Baby" was certainly a highlight.

But since the show is created by the same person (Roberto Aguirre-Sacasa) who created "Riverdale," we can't have nice things.

Sabrina is awoken from her sleep by a bat flying through her window, a worrisome omen. When she awakens in the morning, we get to meet Sabrina’s aunts who are all about her dark baptism. Hilda and Zelda are both encouraging her to accept her rite into the coven of witches under the Dark Lord.

The show grapples with a very important topic: A woman’s right to choose for herself. As Sabrina struggles with her decision, we see the witchy world around her wanting to force her into a box without giving her the right to decide her own fate.

The Dark Lord, a symbol of patriarchy, does not seem very forgiving when it comes to women and their choices, while Sabrina forms the Women’s Intersectional Culture and Creative Association – WICCA – at her school.

There's obviously a bit of symbolism here, which is interesting considering Wicca a religion promotes “with harm to none." Since the Church of the Dark Night doesn't exactly seem friendly when it comes Wiccan ideals or "light magic," perhaps, it’s a foreshadow on Sabrina as a witch?

Her indecision about the baptism concerns her aunts in the show's first episode. Zelda is least interested in Sabrina’s thoughts, however, quickly dismissing her on the topic, while Hilda, the caring and even motherly figure, is sympathetic to the 16-year-old witch’s frustration.

Sabrina attempts to tell her boyfriend Harvey that she is a witch, but he does not respond well. Because, obviously, what mortal would? She erases his memory out of regret and the two walk away together. She returns home to discuss her indecision with her cousin Ambrose. (Who’s using a laptop in the ‘60s no less. Maybe he can time travel?) Ambrose tells her she can take a bite from an apple off the oldest tree in a orchard and it will show her the path.

In the orchard, Sabrina finds the oldest tree through a maze, but before she can get to the tree she's attacked by a super creepy voodoo scarecrow brought to live by Ms. Wardwell.

When she eventually finds the apple needed and takes a bite, the fruit grows black with maggots, blood pours from her hand and mouth, and she sees the 13 witches who died in Greendale in 1692 (the town’s own “Salem Witch Trials.") The Dark Lord comes out of a tree in a fiery world and Sabrina spits out the apple in fear, ending the vision.

She goes home, presumably to announce she will not partake in the baptism when her aunts greet her with the high priest, Father Blackwood who calls Sabrina “chosen.”

Will Sabrina stick up for herself despite all opposing forces? And if so, how will she battle all these literal demons and witches coming at her, wanting her to make one choice she doesn’t want? Are there witch hunters out there? Why is Sabrina “chosen”? And who was that kid in the Spellman's mortuary?

Otherwise, binging this all weekend just became a necessity. Who needs a life anyway when you have the Spellmans?