The hit series will begin production in Philly this month, and the fifth season will debut in 2020 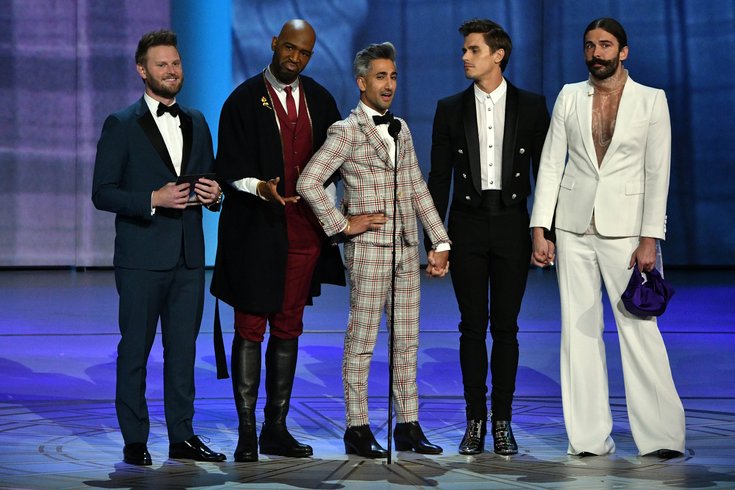 The cast of Netflix's "Queer Eye" announces nominees at the 70th Emmy Awards in 2018. The hit show is filming its fifth season in Philadelphia.

Netflix announced Tuesday what had been whispered about for a couple months: the Emmy-winning "Queer Eye" is coming to Philadelphia.

The hit show's fifth season will be filmed in Philadelphia, according to Entertainment Weekly. Production for the fifth season begins this month, which means you might be able to catch one of the show's five experts — Bobby, Jonathan, Antoni, Tan, and Karamo — around the city in the coming weeks.

The fifth season will debut in 2020. The first two seasons were set in Atlanta, and the third season was set in Kansas City. Netflix announced Tuesday that the fourth season, which debuts in July, also will be set in Kansas City, which of course begs the question: If the show is doing its seasons in pairs, will Philly also be featured in the show's sixth season?

Interestingly, Karama Brown began his career in reality television in 2004 as a member of "The Real World: Philadelphia" as the first out, gay, black man on reality TV.

"Queer Eye" itself is directly related to the original show of the same name, which aired between 2003 and 2007 on Bravo. The current show features the five-man cast helping a man refine his life in five main categories: clothing, grooming habits, diet, sense of culture, and home decorating.

Two months ago, a casting flyer was found floating around Philadelphia, sparking interest and intrigue about when the cast might show up, and who they might be looking to give a makeover.

And just last month, the show's Tan France gave star local chef Jesse Ito, of Royal Izakaya, some fashion tips and advice ahead of his appearance at the James Beard Awards Gala. Ito was nominated for Rising Star Chef of the Year at the awards ceremony, where Philly's Zahav was named the best restaurant in the country.