Miller plays a small-town Pennsylvania woman in the upcoming film 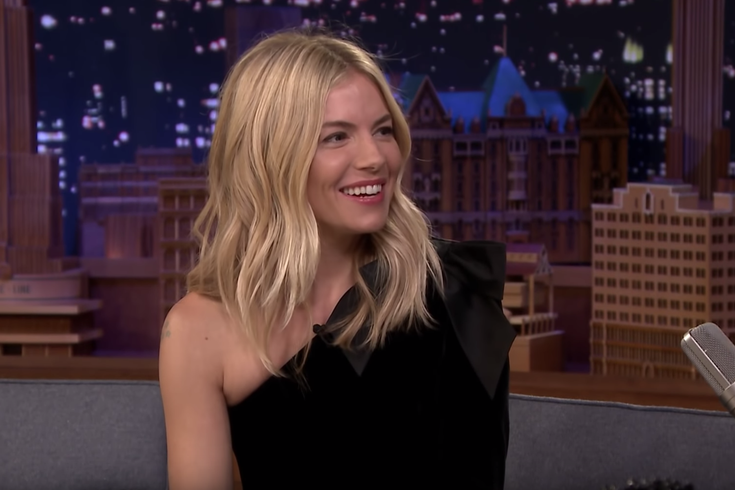 Sienna Miller, a British actress, had to learn the eastern Pennsylvania accent for her latest film, "American Woman".

British actress Sienna Miller has an accent when she talks, but it's decidedly not something you normally hear from an eastern Pennsylvania resident.

For the film "American Woman", which comes out next week and is set in "a small, blue-collar town in Pennsylvania", Miller had to figure out what people from around here talk like.

It wasn't easy, because the Philadelphia accent is so dang weird, but she clearly had some help, because she kind of nailed it.

Miller appeared on Jimmy Fallon's "The Tonight Show" late this week to talk about the film, and specifically about the accent she uses in the film.

"It's like a Philadelphia, Mason-Dixon-esque accent, from Philly," Miller explained. "Pennsylvania's weird, because the closer you get to the Mason-Dixon line, the more like, "-eau" it goes. It sounded initially a bit Southern, but it's not."

That's fair! The "-eau" is definitely a defining characteristic of the Philly accent. To get a better sense of what she's talking about, you can watch the video below, where Miller shows off her pretty-solid take on the accent:

Last year, linguistics expert Dr. Betsy Sneller talked about the Philly accent on a linguistics podcast, where she explained the Philadelphia A:

"People who speak with the Philadelphia English dialect, Sneller explained, use what’s called a “split short-a system,” talking about the sound speakers make when they say a word like “trap.”

"Sneller says Philadelphia English’s version of the split short-a system is one of the most complex in English, so you can flaunt that over anyone who thinks Philadelphians talk funny."

Miller said she needed a few words that would help her get into the accent. She used "poster" and "boat". The way she said these two words was a little dramatic, but we'll let it slide.

In the film clip Miller played for Fallon's audience, she's a waitress asking Aaron Paul's character about his order. She confirms his order, which is also pretty Philly-area:

"So, Bud draft with a cheesesteak, fried onions. Ketchup?"

Aaron Paul's character says yes. There you have it: Philadelphia is all weird vowels and cheesesteaks. What a place.