WatchOS7 will coordinate with the Health app on a user's iPhone 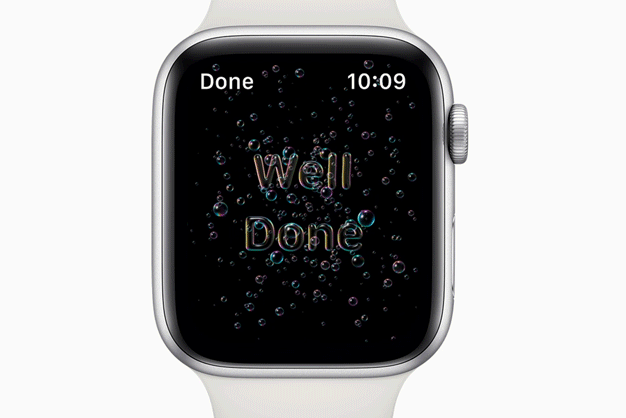 The new update to Apple Watch includes a hand-washing feature that alerts users if they do not wash their hands for at least 20 seconds.

The next software update to the Apple Watch will include a new feature that alerts users if they do not spend enough time washing their hands.

In light of the COVID-19 pandemic, Apple Watch owners who update to WatchOS7 can use the device to ensure they spend at least 20 seconds washing their hands – the amount recommended by the U.S. Centers for Disease Control and Prevention.

The Apple Watch senses when a wearer is washing their hands by using microphones, motion sensors and "on-device machine learning" that recognizes hand-washing motions and sounds. Then, a 20-second countdown timer begins. Users who finish washing their hands before the timer ends receive an alert urging them to continue washing.

Apple Watch users also can choose to be reminded to wash their hands when returning home. Watches will sense when a user is coming back from a trip outside by using location data and send them an alert.

Hand-washing data can be collected by the watch and shared to the user's Health app on their iPhone. Sharing the data across platforms will allow users to track the frequency and duration of their hand-washing.

The Health app also will include information explaining why hand-washing is important to overall health. Sounds used to detect hand-washing will not be recorded by the Health app or the Apple Watch, the tech giant said.

A new sleep-tracking feature included in WatchOS7 also will help users learn about their personal health and sleep habits. For the first time, wearers can use their Apple Watch to see how much sleep they get each night.

Sensors on the watch will capture this data through the"detection of micro-movements from the watch’s accelerometer, which signals respiration during sleep," Apple noted in a press release.

Users will be provided with a visualization of their previous night's sleep patterns when they wake up. A chart will include sleep data from the previous week.

When users are ready to fall asleep, putting the Apple Watch in "Sleep Mode" turns on Do Not Disturb and turns down the screen's brightness. Users also can choose to remind themselves to charge their Apple Watch before bed.