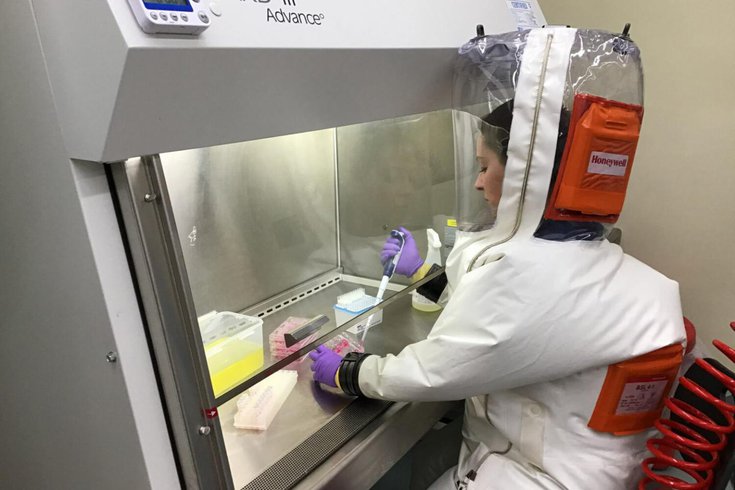 To fight COVID-19, researchers are using nano-sized droplets covered in fragments of lung and immune cell membranes. Early experiments show the coronavirus may latch onto these 'nanosponges' instead of spreading to living lung cells,

Infectious disease researchers at Boston University and the University of California San Diego are hoping to leverage nanotechnology in the fight against COVID-19.

The breakthrough technology, described in a new Nano Letters study, aims to create bio-friendly nanosponges that will attract the coronavirus by mimicking living lung cells.

A series of promising experiments at the National Emerging Infectious Diseases Laboratories tested the use of nano-sized droplets of polymers covered in fragments of living lung and immune cell membranes. These bio-friendly plastics could potentially be administered via nasal spray.

"I was skeptical at the beginning because it seemed too good to be true," said NEIDL microbiologist Anna Honko, one of the co-first authors on the study. "But when I saw the first set of results in the lab, I was just astonished."

SARS-CoV-2 infects patients by latching onto unique signatures of lung cell membranes. The virus then hijacks these cells, replicating and deepening the severity of both the infection and the body's immune response.

The NEIDL experiments conducted in cell culture dishes found that the polymer droplets covered in pieces of lung cell membrane were more effective at attracting SARS-CoV-2 than living lung cells.

"Our guess is that it acts like a decoy, it competes with cells for the virus," said NEIDL microbiologist Anthony Griffiths, co-corresponding author on the study. "They are little bits of plastic, just containing the outer pieces of cells with none of the internal cellular machinery contained inside living cells. Conceptually, it's such a simple idea. It mops up the virus like a sponge."

Each nanosponge droplet is a thousand times smaller than the width of a human hair. When SARS-CoV-2 binds with the cell fragments inside these droplets in a cell culture dish, the virus dies, according to researchers.

Once trapping SARS-CoV-2, the biodegradable nanosponges should be eliminated by the immune system in the same way it breaks down and disposes of dead cell fragments, the researchers said.

The use of immune cell fragments on some of the nanosponges would be intended to contain the body's overactive immune response to the virus. Decoy droplets would disrupt the cellular signals that lead to a severe inflammatory response and acute respiratory distress, Honko and Griffiths said.

The NEIDL currently is planning additional experiments to see how well the nanosponges prevent the coronavirus infection in animal models. If the experiments prove successful, researchers said this approach could be converted into a non-invasive nasal spray treatment.

"That would be an easy and safe administration method that should target the appropriate [respiratory] tissues," Honko said. "And if you wanted to treat patients that are already intubated, you could deliver it straight into the lung."

The concept behind nanosponges could become an effective way to treat a variety of viral infections, from influenza to the deadly hemorrhagic fevers caused by the Ebola, Marburg and Lassa viruses, researchers said.

"Traditionally, drug developers for infectious diseases dive deep on the details of the pathogen in order to find druggable targets," said Liangfang Zhang, a UC San Diego nanoengineer and leader of the California-based team. "Our approach is different. We only need to know what the target cells are. And then we aim to protect the targets by creating biomimetic decoys."