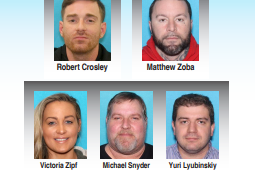 Through a joint investigation, referred to as 'Operation Zombie,' between attorneys general Josh Shapiro and Gurbir Grewal, officials uncovered 36 guns and over 20 ounces of methamphetamine.

An alleged gun trafficking ring that illegally sold weapons and drugs in both Philadelphia and Camden has been dismantled by a joint investigation conducted by Pennsylvania and New Jersey officials.

The investigation, dubbed "Operation Zombie," recovered 36 guns and 20 ounces of methamphetamine – the equivalent of 14,000 individual doses – as well as other drugs, including cocaine, heroin and marijuana.

One of the seized guns — an AK-47 semi-automatic rifle — was identified as the weapon used in the October 2019 killing of 2-year-old Nikolette Rivera, according to officials. The child was shot while being held in her mother's arms on the 3300 block of Water Street in Philadelphia. The child's mother and a contractor also were shot during the incident.

Another 9mm handgun seized by authorities allegedly was used during a September shooting in Philadelphia. No one was injured during that incident.

Additionally, Victoria Zipf, 33, Michael Snyder, 44 and Yuri Lyubinsky, 39, allegedly assisted with drug and gun sales. Zipf was arrested on Jan. 23. The arrests of Snyder and Lyubinsky are pending.

Grewal and Shapiro used the bust to announce the PA/NJ Gun Trafficking Initiative, an effort to prevent gun trafficking and criminal activity that crosses state lines.

"Four out of five crime guns in New Jersey originate in states with weaker gun laws, with the largest number coming from Pennsylvania, and we’re going to keep working together to arrest the traffickers who put our residents and our law enforcement officers at risk,” Grewal said in a statement.

The Federal Bureau of Investigation, U.S. Drug Enforcement Administration, and Bureau of Alcohol, Tobacco, Firearms, and Explosives also assisted in the investigation.