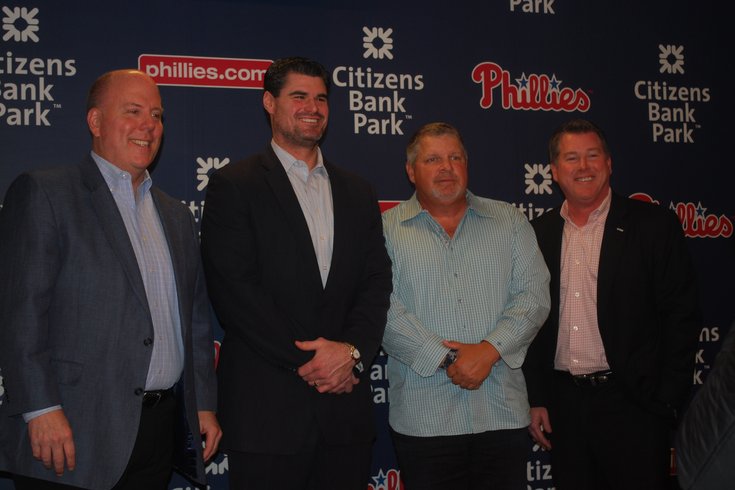 John Kruk was officially introduced as a member of the Phillies television broadcast team for Comcast SportsNet on Tuesday. Kruk, who will work with play-by-play man Tom McCarthy, fellow analysts Ben Davis and Mike Schmidt (not pictured), and roving reporter Gregg Murphy, said he expects to be behind the mic for "around 90" regular season games in 2017.

John Kruk was officially hired by Comcast SportsNet on Monday, more than two months after his hire was widely reported. On Tuesday, a week before Phillies pitchers and catchers hold their first workout of spring training in Clearwater, Fla., Kruk was re-introduced into the Phillies family with the rest of his television broadcast partners at Citizens Bank Park.

“When John Kruk was with us in the broadcast booth before his venture at ESPN, we all knew that he was going to be successful,” play-by-play man Tom McCarthy said, referring to Kruk's previous role with the Phillies TV crew following his retirement.

Kruk, sitting alone at the dais, mockingly made his pupils wide and rolled them.

“We are beyond pleased that he is returning to Philadelphia to be a part of our broadcast team,” McCarthy continued.

“It’s going to be a long year for you, pal,” Kruk quipped.

Kruk will work alongside McCarthy, fellow analysts Mike Schmidt and Ben Davis, and roving reporter Gregg Murphy. Kruk will split the bulk of the color analyst work with Davis, similar to the setup Davis and Matt Stairs have had in the last two seasons. Stairs' place on the broadcast team opened up when he was hired as the Phillies hitting coach in early November.

On Tuesday, Kruk said he was scheduled for “about 90” regular season games. He’ll make his debut on Feb. 25 when the Phillies host the New York Yankees in Clearwater, Fla.

"I’ve had so many people say 'Welcome back,' but once you’re in this organization, you never leave," Kruk said. "Sometimes they don’t allow you to leave. You’re always a part of the Phillies family. And even though I played for three different teams, I’ll always be a Phillie."

Phillies pitchers and catchers hold their first workout a week from today. Thankfully, not here. It's 79 in Clearwater, Fla., today. pic.twitter.com/97GJa7i4Ag

Kruk said a member of the Phillies ownership group first approached him over the summer, but that he had been talking “for a few years now" about the possibility of coming aboard. The official announcement of his hire, however, came more than two months after it was first reported, which gave Kruk the opportunity to have a little fun with Davis.

"I got to meet Ben playing golf," Kruk said. "Sorry, Ben. We pulled a little quick one on Ben, he had a panic attack. But Ben is still employed, he’s good to go. I’m looking forward to getting started."

Why did you decide to leave ESPN and go on the road (for a busier schedule)?

Kruk: What happened at ESPN, this was like a two-year thing. I have trouble explaining how it came about, but basically, they were cutting back. They were cutting back shows, we used to do seven days of shows, sometimes two a night, and they cut it down to three. Before they cut back I had signed a long-term deal. They were going to do more games and trying to get a (playoff game or series) and that didn’t happen, so they had to figure out a way to cut payroll.

I didn’t do anything wrong. [Laughs] I know you’re asking about a certain pitcher who I played with. [More laughter] It had nothing to do with that. No. No. Unless they found out what I was texting him, then they could have fired me for that.

Then why join the Phillies, hit the road again?

My wife said I’m too young to retire. I call B.S. on that, but she didn’t believe me. We live in Florida but we’re here all summer. What else am I going to do? I gotta do something. If I sit around and eat all day, not a pretty sight.

What do you know about the Phillies roster?

[Laughs] I have the best resource in the world, Larry Bowa. No, I can’t tell you the things he says about some of the players. There is going to be some studying. But I watch enough that it ain’t gonna be that hard. I’m really going to rely on Ben, Tom, and Murph to help me with pronunciations. I’m Polish and from West Virginia – there’s strike two already. I’ll figure it out. … I know they (have) young pitching. They’ve separated themselves from some long-term deals. Could be difficult this year, but I think the future looks really good.

What broadcasters do you like to listen to, now and in the past?

Harry (Kalas), I like Harry. The current announcers? Dan Shulman (ESPN) is great. Where I grew up we didn’t have any cable, so we got the Game of the Week with Tony Kubek and Joe Garagiola. I like the guys in San Francisco (Duane Kuiper and Mike Krukow), I’m related to one of them, he told me so – Mike Krukow. Somewhere in Poland. I like listening to them (Giants team), they play well off of each other. I like them a lot. … (But) I owe one of them a bottle of scotch. Don’t ask. Long story.

Can you see yourself doing this for a long time, or just going to try it out and see how it goes?

As long as I don’t get a sore throat I guess. Put it this way, I probably train harder for this than when I was playing.

Are you going to be as blunt and honest on a local broadcast (as opposed to being a national guy), since you do have to ride the charter flight with the players, regularly interact?

I’m going to take it for granted that if they screw up, they know (they did). Maybe some of them don’t. But I’m not - it is what it is, you know? Ever since I came here in 1989 all people would talk about is how knowledgeable Phillies fans are. So if I sugarcoat something, they’re gonna know I’m being a little you-know-what. But I’m not going to go out of my way just to bury someone. Hey look, I think I was here for a week and I forgot how many outs there were and a guy tagged from second and scored, I’m jogging in from the outfield. I understand. I made every mistake you could make, on and off the field. I can’t present that to Phillies fans and sugarcoat it. They see through that because they are knowledgeable. They understand. I’m not going to go out of my way to rip the organization. But here’s the thing – when you’re sitting there watching game, you don’t know whether we're on national television or what. I don’t sit there and say, 'Oh my God, I’m on national TV, I’m scared to death.' I don’t know. It’s the same people watching, baseball fans. Phillies fans. I’ll never knock Phillies fans, man. Passionate.

Kruk spent the last 13 seasons working with ESPN before parting ways with the network in October. In case you missed it, here is the complete Phillies TV broadcast schedule for spring training.