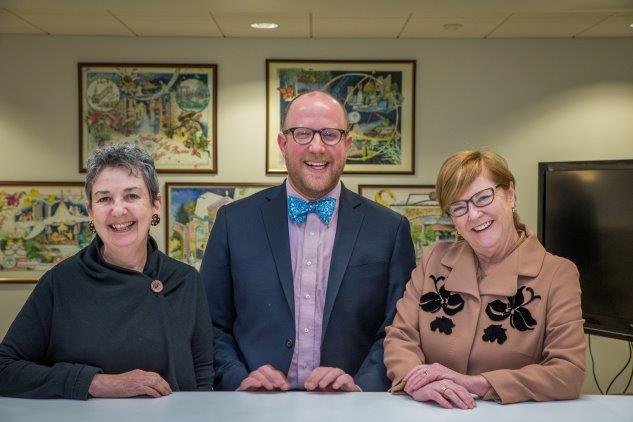 On March 5, the Pennsylvania Horticultural Society will unveil to the public the 2016 Philadelphia Flower Show. This year's show is a national-parks-themed iteration of the 189-year-old tradition that last year attracted 250,000 people to its array of extraordinary floral exhibits.

At the helm of the effort is PHS President Matt Rader, who succeeded Drew Becher in January. Below, Rader, a Mercersburg, Pennsylvania, native who's previously worked for the Fairmount Park Historic Preservation Trust, the Urban Land Institute in Washington, D.C., and for the East Passyunk Avenue Business Improvement District as its director, talks early days on the job, how he wants to engage young gardeners and what to expect at this year's Flower Show.

Having just started, did you really have to hit the ground running with the Flower Show?

I did. [Laughs] So I started on the 11th, and it was very much diving right into it -- getting to know the Flower Show, getting ready for this year. Fortunately, we have a big team led by Sam Lemheny that actually plans and delivers the show. I’ve certainly gotten very familiar with the content and the partners of the National Park Service and others, and to me one of the coolest things to discover about the show, is we think of the Flower Show the event -- huge, with 250,000 people -- but there are nearly 4,000 people who volunteer or compete in the show. And so there’s just this unbelievable community around the different competitions around landscape design, floral design, individual plant growing in the Horticourt -- all these amazing volunteers who help with the shop and the operation of the show. It’s like joining a small city.

So by January, where is the Flower Show in the planning process?

The Flower Show planning is about an 18-months-in-advance cycle. So by January, they’re actively thinking about design for the 2017 show, and very much in execution mode for the 2016 show -- ordering merchandise, working with exhibitors to make sure things are finalized, having the final meetings with all the exhibitors and sponsors and partners to make sure plans are laid out and clear, but on the planning side very much thinking about 2017.

So next year might be your first 'real' Flower Show – or even the year after?

2018 will be the first show I’m involved in from Day One. 2017 I’ll have a lot of experience working with. But this show and everything for the first six months, I’m thinking of myself as a student of the organization, getting to know as many people as I can and getting to know how the show and programs work, and learning and absorbing and gathering. It’s been wonderful to discover the diversity of the people and how things work.

What was the first Flower Show you attended?

My first Flower Show was a the Civic Center in West Philadelphia before it moved downtown. I went with my aunt and uncle. My Uncle Pete introduced me to the Flower Show and is a PHS member and is coming this year. I just remember it being beautiful. I was probably 9 or 10 -- it was a long time ago. I had family in South Jersey. And more recently, I had a third date with my current boyfriend at the Flower Show two years ago. It’s been a special thing in my life. I started using an old iPhone in December, and when I turned it on it was a picture of Michael on that date from the Flower Show. It's unbelievable. I hadn’t used the phone in 18 months and here I am now walking into this role in the show, and there it is.

Do you think it’s difficult to put on this giant showcase that’s very entertaining and at the same time make sure attendees walk away knowing there’s a mission behind it they can engage with?

I think it’s a ‘both/and.’ My hope and belief is that a lot of people come to the show, just being exposed to the horticulture and excellence on display, to leave and do something they otherwise wouldn’t have done. Whether planting something, or appreciating the beauty of a garden or thinking about getting involved in a community scale, the fact that this is an event people love doing means they’re exposed to the idea and hopefully feel a call to action.

I think we always try to make it clear the Flower Show is also a huge fundraiser for our greening programs. So, throughout the year PHS is working with thousands of volunteers and participants across the city and the region to plant trees to create community gardens, to grow food, to work in schools with teachers and students to discover horticulture and do horticulture projects, and the flower show is a key part of letting us do that. We can never be too vocal about the fact that PHS is a very vital, year-round organization and that the Flower Show is a key fundraiser of those programs.

What can people expect from this year's National Parks theme?

The number is north of 200 parks represented in the show  … This year's theme is ‘Explore America,’ and we’re trying to draw out all aspects of the park system -- natural beauty, historic beauty and cultural beauty of the parks, so people can appreciate all dimensions. And each exhibitor has been challenged to interpret or think about a park as inspiration for their exhibits. You’ll get a whole range of parks represented, not in replica but in inspiration ...

Rader: We can never be too vocal about the fact that PHS is a very vital, year-round organization and that the Flower Show is a key fundraiser of those programs.

The entrance garden is a big timber lodge inspired by parks of the west and the historic lodges, and there’s also a wonderful video piece part of the lodge which basically starts at sunrise in the east in Acadia and ends in sunset in the west, and you follow the national parks in all their diversity through the day over 10 minutes. It’s pretty neat.

One of the things that makes this theme special is we’ve worked closely with the Park Service. They’ve been involved in helping us interpret the system, and will also be present at the show. Doing talks with rangers from parks across the system both in person and live-streamed, including the oldest park ranger in the system, who is 97, and from the Rosie the Riveter historic site. So, you get the chance to get to know the park system. And I think for people the theme has been [impactful] because a lot of people have emotional connections to parks, and some people know parts of the park system but not others, so I think the chance to explore the diversity is going to be really powerful.

How do you get young people engaged? They are engaged, but it’s usually a certain type of person, not the masses.

So, last night we had City Harvest growers here – community gardeners and urban farmers across the city who grow food with PHS support for food pantries and other distribution, and it was a very varied crew. From geography, to age, ethnicity, etc. And so there is quite a breadth of engagement in PHS and horticulture in the city. And I think continuing to create ways for people to find their way into our programs and making sure PHS offers a very open door.

Something like the Flower Show this year, we held -- literally for the first time ever -- workshops on how to enter the Flower Show. It’s a giant competition: Anybody can enter plants in the show and anybody can enter design galleries. One can easily perceive that it’s closed or not find a way into how to do it, and so opening the door and saying, ‘Hey, we’d love you to be part of this tradition.’ And that could include, in the future, trying to have new classes around countertop gardening, or whatever else might interest people to reach the broadest set of people and use that energy of competition in the show to inspire people to take on projects they wouldn’t otherwise take on.

There’s a lot of other ways to do it. I would love to continue to think about how, in this city, particularly in other communities, we help people with common interest in horticulture and gardening to find each other, connect socially, share ideas, collaborate and support that kind of growth of a network in a movement.

Right now it seems like PHS is popularly known for the Flower Show and, more recently, the pop-up gardens. Is there a third pillar you have in mind that can continue to push PHS out there in the mainstream?

PHS is this network of networks, not to be hokey. Pop-ups – let’s say we have 10,000 people who have attended in the last couple summers. The Flower Show has 250,000 visitors, and you’ve also got 4,000 tree tenders -- people who have been trained by PHS to tend to trees in their neighborhood. They're less visible, I agree, but a very big community of people out there doing good things. Similarly, City Harvest has 140 growing sites around the city where they're producing things – again, less visible, but a big part of the puzzle. We talked about finding ways to get more people who don’t currently garden, or have a latent interest, to connect them together and support them with education and work days and opportunities to take on projects together. That would be a way I’d like to help more people discover gardening and its power, whether in their home, street or in a community garden.

But for PHS the giant pillar so to speak, the Flower Show is a huge draw, community greening program is obviously a huge draw and all the public landscapes work we do -- of which the pop-ups are just one piece of the puzzle. PHS also manages the Azalea Garden at the Art Museum, Logan Circle and a number of other civic and public landscapes around the city people enjoy. I think often PHS is invisible to people who know and love these spaces.

Unfortunately, there’s no PHS stamp on every tree you plant in the city.

Nor does there need to be. But us helping to both -- to get the message out for recognition, but more importantly, get the message out so people who want to participate or get inspired by this kind of work can find us and get involved. We’re always looking for new help, people interested and new ideas.

The 2016 Philadelphia Flower Show runs from March 5-13 at the Pennsylvania Convention Center. PHS members can see the exhibit starting Fri., March 4 at noon.