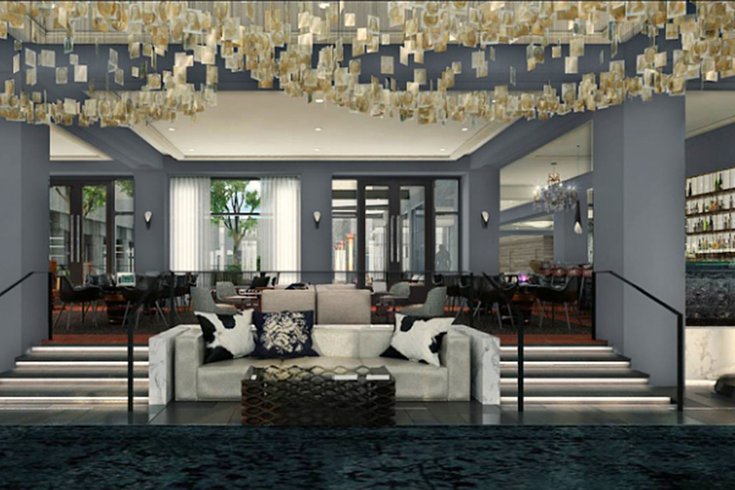 A sketch of the newly designed lobby of The Logan, Philadelphia's Hotel, which will open in the fall.

Two days after the Four Seasons Hotel at One Logan Square in Philadelphia closed its doors, the site's new management company has released plans that include a rooftop lounge and a modern farm-to-table steakhouse.

The Logan, Philadelphia's Hotel, will open in the fall as part of Curio – A Collection by Hilton, which is introducing an "art inspired interpretation on Modern Luxury."

"When the doors re-open, Philadelphia can expect something truly unique, a hotel they will be extremely proud of," said Walter Isenberg, president and CEO of Sage Hospitality. "Everything about this transformation is inspired by the city, its people, its magic and grit. The Logan will be something that visitors and locals don't just think of as a hotel, but as Philadelphia's favorite place to be."

Renovations will transform the hotel, which was operated for more than 30 years by Four Seasons, Sage said.

The lobby and first floor will feature dramatic deep ocean blues, metal and stone more often associated with sculpture than Monet. Guest rooms and suites will be redecorated with newly designed floor-to-ceiling interiors. Meeting and banquet space, along with a new ballroom, will also be refreshed.

A new spa and fitness center will be housed on the lower level. And, in maybe the most dramatic change in space, a rooftop lounge will open in spring 2016.

The architect of record is BLT Architects of Philadelphia

The steakhouse, called Urban Farmer – Philadelphia's Steakhouse, will be adjacent to the hotel and will serve breakfast, lunch and dinner daily. It will serve local, organically sourced food from the region's farmers, ranchers and foragers, Sage said.

"Every aspect of Urban Farmer in Philadelphia will be custom tailored and pay homage to the people who live, work and play in Philadelphia. From the look and feel of the restaurant to the locally sourced offerings that are served there," said Peter Karpinski, co-founder of the Sage Restaurant Group.

Named to honor James Logan, the hotel will further celebrate the Logan Square location. Logan was one of the most respected men of his generation in Colonial Pennsylvania. He was a dedicated and influential statesman, philosopher, diplomat and scholar.

Four Seasons expects to open a new hotel in Philadelphia in early 2018. Their new digs are planned for the upcoming Comcast skyscraper set to be completed by 2017.