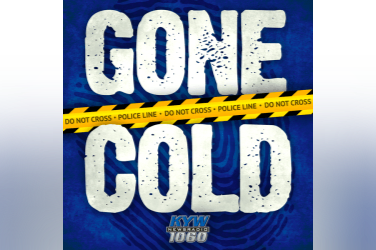 The logo for 'Gone Cold,' a new podcast from KYW Newsradio that looks at cold cases in the Philly region.

That's the question the first episode of KYW Newsradio's "Gone Cold" attempts to tackle. The new monthly podcast, launched Thursday, will look at cold cases in the Philadelphia region.

Reporter Kristen Johanson and Tom Rickert, an editor and self-described "utility infielder" for the station, co-host the new series. Johanson said she takes care of most of the writing and story structure, while Rickert handles the audio and production.

Rickert, who already hosts "Scroll Down" on KYW, had been "itching" to do a new podcast, Johanson said. She called him up one day with the idea of a true crime series, and he immediately bought in. Rickert's already "obsessed" with podcasts, and Johanson has a particular interest in crime stories, as her godfather was a retired homicide detective.

Jason Richardson's story was chosen for the first episode after the duo contacted Michael Chitwood, superintendent of the Upper Darby Police Department. He put them in touch with Capt. Dave Madonna, who investigated the case. Johanson said when speaking to both, she could tell the 13-year-old, unsolved murder still haunts them.

"(Madonna) was ready to talk about it for hours," Johanson said.

Richardson, then 22, was found stabbed to death outside the Terminal Square Bar near 69th Street Terminal station in October 2004. Despite upwards of 300 people spilling out of the bar after the killing, police were unable to get enough information from witnesses to make an arrest, something that perplexes Johanson.

Police believe Richardson's death may be linked to him dancing with a girl who may have had a boyfriend or another person interested in her. A fight broke out that spilled onto the street, and when the crowd dispersed Richardson was dead and his friend Anthony had three stab wounds to the back.

Like all cases to be featured in "Gone Cold," the murder remains unsolved to this day. You can listen to episode one below.

The new podcast provides an opportunity for Johanson and Rickert to dive deeper into stories than they could during a traditional news broadcast on KYW. For Rickert, it allows him to take advantage of a tool 30-second news spots don't use: pauses.

"Sometimes, a silence or a pause can be more impactful than words," he said. "If you're time constrained, you don’t have time to let it breathe."

Johanson appreciates having another journalistic outlet, even if becoming so ingrained in a case like Jason's can be emotionally taxing. Speaking with Richardson's mother Leola, Johanson said she found herself tearing up at one point, hearing the pain Leola still carries.

Richardson was by all accounts a kind and caring young man, who wasn't the fighting type and had no criminal history.

"That's another part of it too, the whole, ‘Why do bad things happen to good people?’" Rickert said.

By digging up old cases like Richardson's, the two shine light on crimes mostly forgotten by the public at-large and open the door to people potentially coming forward with new information.

It's not far-fetched: This past year, a breakthrough was made in a more than decade-old missing persons case, with two men charged in connection to the death of a former beauty queen. Many at least partially give credit to the investigative podcast "Up and Vanished" for raising awareness of the case.

"As a journalist, you see all this terrible stuff going on in front of you, and you have no the way to help other than that medium in front of you," said Johanson, who stressed that anyone with information on Richardson's death should contact Upper Darby police here.

Johanson and Rickert don't have a set amount of episodes for the first season, but they already have a case in New Jersey picked for episode two. "Most" of season one is already in the works, Rickert said.

"We're both really committed to telling these stories, and we'll put as many of them into each season as we can," he added.