Here's where the next Wawa stores will open in Philadelphia 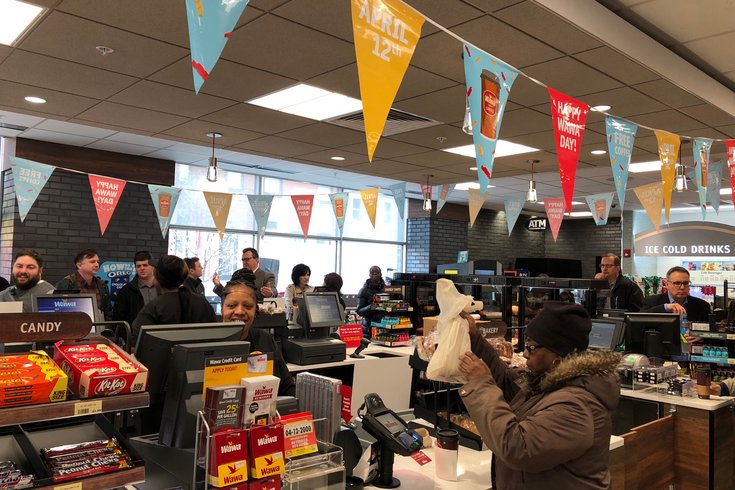 Wawa opened its eighth Center City store on Thursday – at 2131 South St. The convenience store chain continues to expand in Philadelphia with plans for its largest store in the city to open at Sixth and Chestnut streets in the Public Ledger Building on Independence Mall.

Amidst fanfare and a sea of free coffee, Wawa opened its newest store at 2131 South St. in Center City on Thursday morning, but the convenience chain has even more in store for Philadelphia.

A new flagship Wawa store across from Independence Mall in the Public Ledger Building is planned for Philadelphia, along with five other stores slated to open within the city later this year.

RELATED: Free coffee from Wawa and how to order from store's secret menu

Officials provided details of the new Sixth and Chestnut location – which at 11,300 square feet will be Wawa's largest store – as they celebrated the grand opening of the South Street Wawa.

The South Street Wawa marks the chain's eighth Center City location. Yet, because it sits near the boundary of the Graduate Hospital neighborhood, Wawa President Chris Gheysens views it as more of a neighborhood store.

"We really haven't built a store like this, I would say, in decades," Gheysens said.

Other new Wawas in Philadelphia will be opening at the following locations:

But Wawa officials are most excited about the new flagship store coming to Old City.

Set to open near Thanksgiving, the store will feature artwork completed by the Mural Arts Program, while mixing industrial and Art Deco elements into the historic building. Plants will adorn that store that also will include both comfortable couches and cafe seating for customers.

The store will feature artisan coffee, specialty baked goods and some of Wawa's newest offerings, including custom salads and signature coffee blends.

"This will clearly be our most significant, unique, largest store," Gheysens said. "And where else better than in our hometown of Philadelphia?" 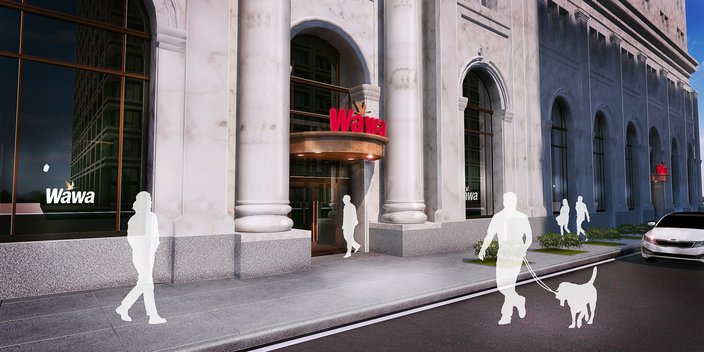 This rendering shows the exterior of the Wawa planned for Sixth and Chestnut streets inside the Public Ledger Building across from Independence Mall. At 11,300 square feet, it will be the largest Wawa among the chain's nearly 800 convenience stores. 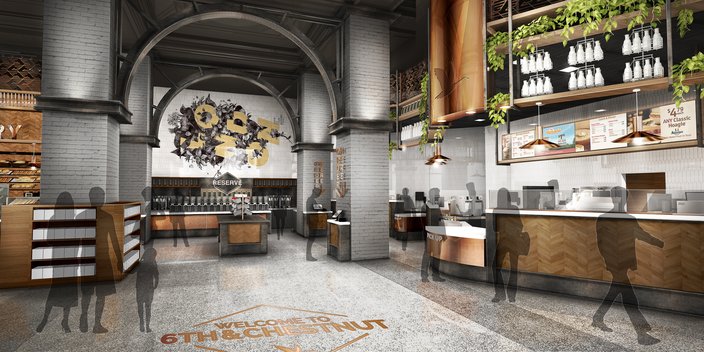 This rendering shows an interior view of the Wawa planned for Sixth and Chestnut streets inside the Public Ledger Building across from Independence Mall. At 11,300 square feet, it will be the largest Wawa among the chain's nearly 800 convenience stores. 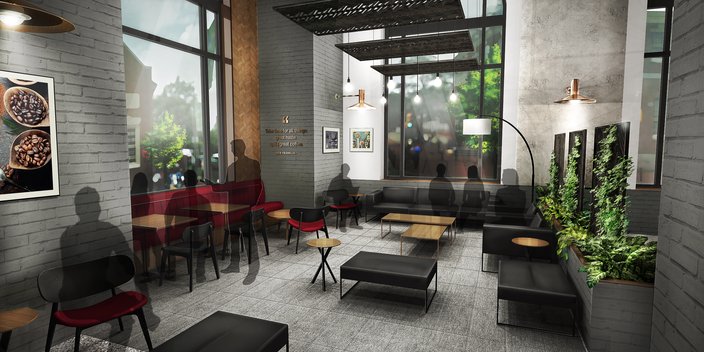 This rendering shows an interior view of the Wawa planned for Sixth and Chestnut streets inside the Public Ledger Building across from Independence Mall. At 11,300 square feet, it will be the largest Wawa among the chain's nearly 800 convenience stores.

Gheysens acknowledged officials heard some grumblings when the company opened its first Washington, D.C., Wawa earlier this year. At 9,200 square feet, that store currently is the chain's largest.

The largest Wawa in Philadelphia, at 7,000 square feet, sits at 19th and Market streets. The Independence Mall location will dwarf that.

"That will really be able to appeal to the locals and the visitors there and really put our best foot forward for Philadelphia," Gheysens said.

Currently, the Wawa at South Broad and Walnut Streets is among the busiest in the city, with checkout lines often snaking through the store. Wawa officials hope the new Center City locations help alleviate that congestion.

"We hope so," Gheysens said. "We're capturing a lot of the bodies that walk by in that store, which is good. But it could use a little relief. That store was never built, nor engineered for that level of volume."

As Wawa expands, the chain consults its network plan to ensure stores are appropriately spaced throughout the city to handle both daytime and nighttime populations. Officials examine pedestrian counts for city intersections, looking to place Wawas on the busiest blocks.

"Then it gets down to the neighborhoods and communities, where you have something like this at 22nd and South, which is vibrant" Gheysens said. "We know we needed something over here because of the population. And we know it could never be a huge site."

The announcement of the new stores coincided with the 54th anniversary of the first Wawa store opening in Folsom, Delaware County in 1964 – a date that the company now dubs Wawa Day.

To celebrate, all 790-plus Wawa stores in Pennsylvania, New Jersey, Delaware, Maryland, Virginia, Florida and Washington, D.C. will give away free coffee to customers. Wawa officials have estimated its stores will give aware 2 million free cups of coffee today.

Additionally, the Wawa Foundation – the company's charitable arm – announced it has raised and donated more than $50 million to 4,000 local organizations. The foundation presented a $211,897 grant to the Special Olympics Unified Sports program as Wawa officials celebrated the grand opening of the South Street Wawa.

Kenney called Wawa "one of the best products ever conceived in retail and food," praising the chain's cleanliness and the friendly nature of its employees.

"Their food, coffee and hoagies are all awesome," Kenney said. "I walk from City Hall to Broad and Walnut to get lunch. People say, 'What are you doing in here?' I say, 'I'm eating well.'"