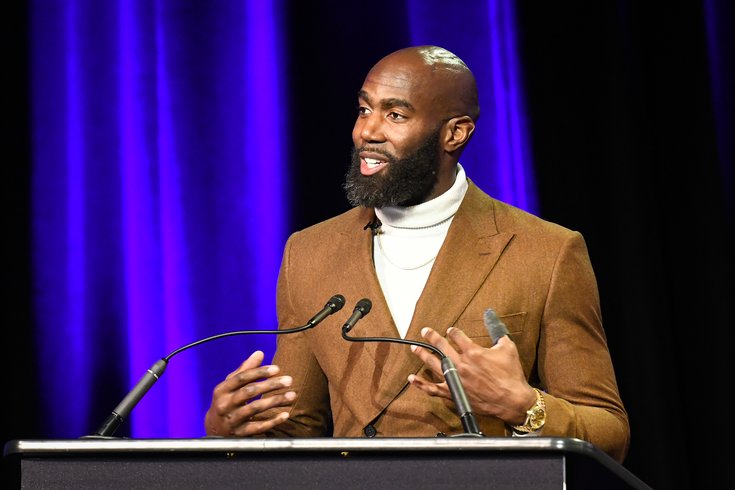 Malcolm Jenkins speaks at the Players Coalition Philadelphia Town Hall at the Community College of Philadelphia on October 28, 2019. (Kate Frese)

Philadelphia Eagles safety and activist Malcolm Jenkins hosted a Players Coalition public forum at the Community College of Philadelphia earlier this week to discuss what residents want to see done by the next Philadelphia Police Department commissioner.

The forum consisted of three panels: activists, city officials and proponents for criminal reform. Among the participants was rapper, entrepreneur and North Philly-native Meek Mill.

An avowed critic of the criminal justice system, Jenkins believes the community has to speak out against things that plagued the previous commissioner’s tenure.

"In 1947, in the midst of great racial unrest in the country, Langston Hughes wrote the poem, 'Who but the Lord.' In the final words of that poem, he said, 'Being poor and Black, and I have no weapon to strike back, but who but the Lord can protect me?' Here we are in 2019 still looking for ways to fight back," Jenkins said. "But what we do know is that we can use our voices and our votes. And so the purpose for tonight is to allow the community to be heard and to make sure that what we want gets out to the mayor, and we see the changes that we want to see in policing in Philadelphia." 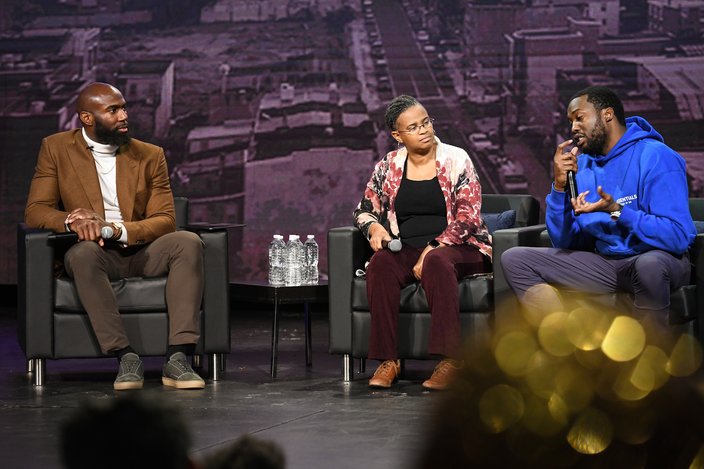 Philadelphia Eagles player and activist Malcolm Jenkins hosted a forum to discuss the city's needs from the next person hired to be Philadelphia Police Commissioner. The evening consisted of three panel discussions. Jenkins is pictured above with the Rev. Leslie D. Callahan, center, and Philadelphia native and rapper Meek Mill, right. The forum, called the Players Coalition Philadelphia Town Hall, took place at the Community College of Philadelphia on Oct. 28, 2019.

Jenkins ran through a lengthy list issues the next police commissioner will have to address.

"We are at a critical juncture here in Philadelphia,” he said. “There is a question that trust with our police and our communities is frayed. Just last week, a top police officer was indicted for sexually assaulting people that worked for him. Over 300 police officers made racist and sexist social media posts. Officers have been accused of corruption and have committed acts of abuse. Black people are stopped and searched far more than any other people in the city. Meanwhile, the majority of cases involving gun violence remain unsolved.

"This is not a knock or indictment of the whole department," Jenkins said. "We all know there are tons of officers that want to make our community safer. But the next police commissioner that will be appointed by the mayor will need to change the culture of the police department in order to gain the trust of the community."

At the forum, Meek Mill represented an influential voice in the community, able to connect with the audience of various ages and backgrounds in a way few can. Born Robert Rihmeek Williams, Mill become a prominent figure in the criminal justice reform movement during his 12-year legal battle during, which raised questions about how fairly he treated in the legal system.

Mill is aware of his level of fame relative to that of the average black person and described never feeling safe when being pulled over by police. He asked a question to the audience that seemed to resonate with everyone within earshot. 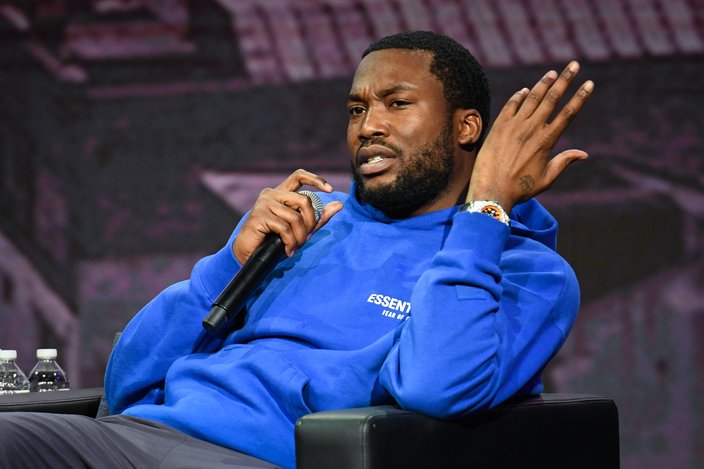 Rapper and criminal justice reform activist Meek Mill speaks as a panelist during the Players Coalition Philadelphia Town Hall at the Community College of Philadelphia on Oct. 28, 2019. The event was hosted by Eagles Safety Malcolm Jenkins. It was organized to discuss policing in Philadelphia and the hiring of the city's next police commissioner.

“I never felt safe during a pullover and been pulled over in Philly my whole life," Mill said. "If you come from one of the urban communities here and felt unsafe being pulled over by a police car, could you raise your hand? And don’t raise your hand just to raise a hand.”

Almost every hand in the auditorium at CCP’s Bonnell building seemed to go up all at once.

Then Mill described a police officers he knew as a youth growing up in North Philadelphia who set the standard for what community policing should look like.

“There was a police officer in my 'hood named Tyrone Crawley,” Mill said. “He used to run a PAL Center in my 'hood, and everybody in my 'hood had a relationship with him. There was nothing that he couldn’t walk outside and do. From the guys on the corner to the people on his steps. He could make anything stop or go in my neighborhood because he had an understanding of what was going on in my neighborhood.”

Crawley’s impact on Mill and his peers could not be overstated.

“My father was dead since I was 5 years old,” Mill said. “A lot of the kids in there, their fathers had been gone their whole lives, but we had a PAL Center. We had a place to go from 4 to 10 o’ clock at night. I had somewhere to go. We had a cop in our neighborhood that could relate to us, built with us and wouldn’t send us to jail for any little thing. Anybody from the North Philly area of Berks or Cecil B. Moore (knows) Tyrone Crawley. He had his hands so deep in the neighborhood, he was like a father figure to some of the kids.”

For Mill, repulsive violence like the recent killing of 2-year-old Nikolette Rivera underscore the need for communities and police to work together for a better society.

“We got 2-year-old girls getting shot in the head,” Mill said. “Every place has a code. If you don’t want the police to handle it, who’s going to handle these guys shooting little girls in the head around the way? Does somebody want to do something about it and make these guys move out of the neighborhood? There has to be some kind of bridge that has to be gapped between the police and the neighborhood. I don’t think anything can be done about it until both sides step up. We’re here talking today and are ready to step up.”