NFC Championship predictions: Rounding up the experts' picks for Eagles-Vikings 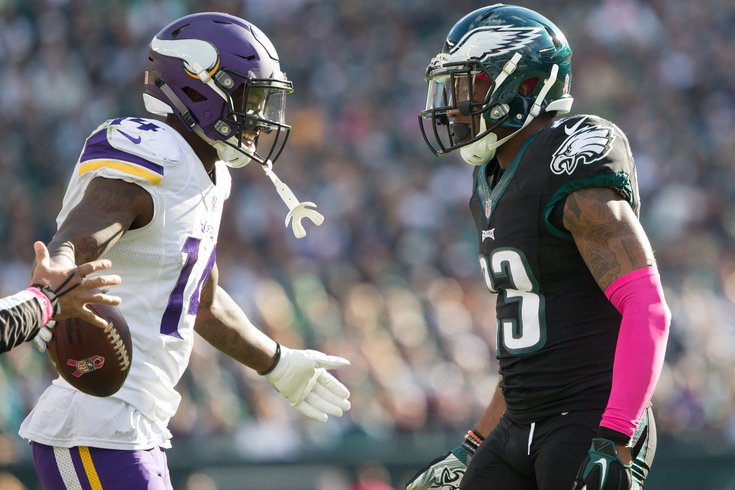 On Sunday, the Eagles will host the Minnesota Vikings with a berth in Super Bowl LII on the line. And, for the second week in a row, the top-seeded Eagles find themselves as home underdogs.

That didn't matter against the Falcons, as the Birds knocked them off last weekend. But now, facing a team that boasts a defense as impressive (maybe more so) than their own, they'll need to hold on to that underdog mentality for at least one more week if they hope to win their first NFC title since 2005.

It's been a long and winding road back to this point for the Eagles, but all that's currently standing between them and a trip to the Super Bowl are 53 Vikings players and 60 minutes of football.

Will this be their last 60 minutes of football until August? Here's a look at what the local and national media have to say about that...

The guess here is that the Vikings will roll out the same lineup they did during the divisional round of the playoffs ... If so, they'll have virtually no OL continuity whatsoever... That is less than ideal against a team that is in the conversation for the best defensive line, top to bottom, in the NFL. I think the Eagles' defensive line dominates both in the run game and passing game, and the Eagles do just enough on offense to pull out another ugly win.

•  ESPN staff: Six of their seven national experts are picking the Vikings. Dan Graziano is the only one picking the Eagles.

The Eagles and Vikings were the best two teams in the NFC for the bulk of the season and mirror each other in multiple ways, from their crushing defenses, to their quality of coaching, to the fact that they're now being led by a pair of former Jeff Fisher castoffs at quarterback. The major difference is Minnesota enters the NFC title game with its identity intact -- Case Keenum first stepped in as its starter in Week 2 -- while the Eagles continue to adjust to life without budding star and MVP candidate Carson Wentz. [Foles] did enough in the second half against Atlanta to push the Eagles over the top, but has also had his share of shaky moments since he took over. He'll have to elevate his game in order to push the Eagles into the Super Bowl -- a tough ask against this caliber of defense.

The Vikings have some conference title game woes they need to overcome this Sunday, having lost their past five appearances, three of which came by seven points or less. Pitting strength against strength, we get to see the best defenses in the league wreak havoc on the opposing offenses. Given how much the Vikings' offense has been able to endure and outlast the past five months, they’ll be the ones standing at the end.

This Vikings team is different. Sure, fortune was on Minnesota's side last week. I can dig that, but that last-second touchdown pass still required a high degree of skill, namely from Case Keenum, who threw the ball right where it needed to be. The matchup between Minnesota's "plucky" QB, as my editor calls him, and the Eagles' pass defense will decide Sunday's affair in Philly.

•  CBSSports.com staff: Seven of their eight experts are picking the Vikings to advance to Super Bowl LII. Will Brinson is the lone analyst picking the Birds.

•  FiveThirtyEight: Once again, the computers are higher on the Eagles than the humans. And Nate Silver's machines say the Eagles have a 57 percent chance of winning and should actually be a two-point favorite.

•  NumberFire.com: You guessed it. Another computer model, another Eagles' win. This time, they're projected to have a 65 percent chance of winning.

•  OddsShark: This computer, however, has gone rogue and is picking the Vikings to win by six.

Flip a coin, throw a dart, light a match. I’ve gone back and forth on this one all week. At the end of Friday’s PFT Live, I had to finally pick a winner. I blurted out the Eagles. It could be a mistake (hardly my first), but home-field advantage is the difference in this one. If the game were being played in Minnesota, the Vikings would win easily; in Philly, it’s going to be a close, grind-it-out game that eventually wears down Minnesota’s defense and offensive line, allowing the Eagles to make that one key play needed to win the game.

The Vikings’ defense had a late-game letdown that nearly cost them the game against the Saints, and it all happened after safety Andrew Sendejo suffered a concussion. Sendejo appears ready to go for Sunday, which should boost a good Minnesota defense. On the other side of the ball, I think Case Keenum will keep playing good football as he has all year, and he’ll lead Minnesota to a Super Bowl on its home field.

•  SBNation staff:  Four of their seven experts are picking the Vikings.

•  Philly.com staff: The four beat writers are split down the middle, but Les Bowen of The Philadelphia Daily News sees the Eagles winning a tight one, 12-10.

Are the Eagles really going to the Super Bowl with Nick Foles at the helm? I have a hard time envisioning this. Then again, many things have happened in our country in the last, oh, year-plus that I would have had a hard time envisioning. If last week’s second-half Foles shows up for both halves this time, they can do it. If a very capable Eagles offensive line somehow keeps an inexorable Minnesota pass rush from getting a lot of pressure, they can do it. If an Eagles defense that only allows 13 points per game at home can keep the Vikings in that range, they can do it.

•  NJ.com staff: Six of their eight NFL writers are picking the Eagles to win, including Joe Giglio, who sees a 17-16 win for the Birds, with quite the dramatic finish.

The game of the weekend will go down at Lincoln Financial Field when the Vikings invade to take on the home underdog Eagles. Much like last week, the Eagles will ride a dominant defense, rowdy crowd and masterful play calling of head coach Doug Pederson to a close game in the fourth quarter. But Minnesota's historic third-down defense will make every point hard to come by here. One big play and one turnover flips this game.

How does an old-school defensive battle end? With two tortured fan bases holding their collective breathe as Kai Forbath lines up for a field goal to send the Vikings to a home Super Bowl. When it goes wide left, The Linc will erupt.

•  The Eagles Wire staff: All seven of their writers have the Eagles winning, including Turron Davenport, who is predicting a 20-14 final score:

The game will come down to which defense can cause turnovers. The Eagles have the edge in that category because of their aggressive defense and Case Keenum’s tendency to turn the ball over. Expect Doug Pederson to add a wrinkle or two with his play calling along with a couple of long field goals by Jake Elliott as the Eagles punch their ticket to the Super Bowl.

•  PhillyInfluencer.com staff: All eight writers are picking the Eagles, including PhillyVoice contributor Nick Piccone, who has the Birds winning 23-14:

Defense. Blah blah blah. We saw what Jacksonville and Pittsburgh did last week – so throw everything out the window. It wouldn’t surprise me if this is a high-scoring game.

But I don’t think it will be. The Eagles’ defense won’t let that happen. They’re going to make plays. They may even score. I think the defense will take over once again and prove that home field advantage does mean something now at The Linc. Dog masks and all.

For Foles, the key is protecting the ball and getting it out quickly. Even with what the Vikings have at linebacker, safety and corner, Eagles wide receiver Alshon Jeffery and tight end Zach Ertz can be difference-makers with their size, hands and athleticism. Holding the ball too long against the Vikings' unpredictable mix of pressure and coverage looks will spell doom for Foles.

In a close game, it's bound to come down to someone getting a key takeaway on defense and/or a critical special team play. The Vikings will be in better position to do just that, and they will return home for the Super Bowl in Minneapolis.