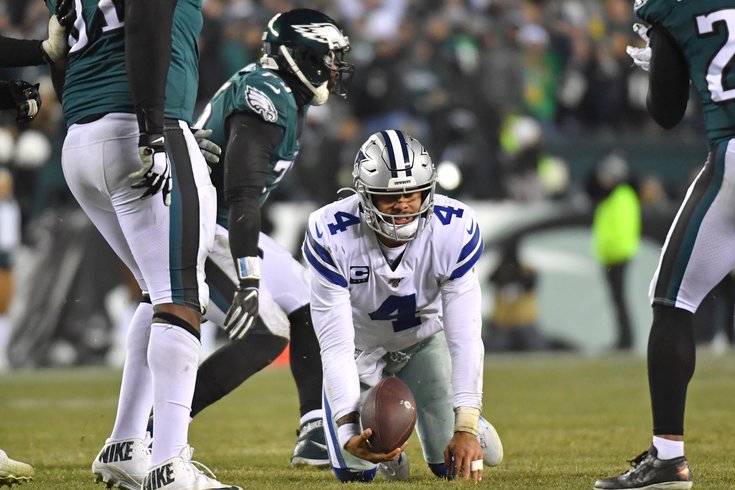 Week 16 is in the books, and only seven teams remain alive in the NFC, with the Cowboys on life support after their loss to the Eagles.

After their loss to the 49ers Saturday night, the Rams are now officially eliminated from playoff contention.

Fearing that the Eagles might lose and not wanting to share their obituary with the Rams, we eulogized the Rams on Sunday morning. Since the traffic numbers show that nobody read that, I'm just going to throw them back in here. If you were among the few who did read it, itt's a pure copy/paste situation on them below, so you can just jump ahead to the hierarchy.

Rams (8-7): The 2019 Rams will be the sixth NFC team since realignment in 2002 to miss the playoffs the year after losing the Super Bowl. A quick look back at the recent history there:

In the divisional round, they beat a Cowboys team that wasn't going anywhere anyway, and they were gifted a win over the Saints in the NFC Championship Game before being on the wrong end of what was one of the worst Super Bowls ever played.

In 2019, with Gurley merely an OK back as opposed to the elite, offense-carrying force he was throughout most of 2018, the Rams sputtered, falling well behind the Seahawks and 49ers in their own division.

Looking forward, L.A. is in trouble. To begin, they have given out some extremely lucrative contracts of late, and some of them already look questionable:

The deals for Gurley, Cooks, and Goff already look shaky, and Jalen Ramsey, who the Rams traded for at the deadline for two first-round picks, will be breaking the bank next.

The Rams are going to be quite top-heavy, in terms of their salary cap allocation. They haven't selected a player in the first round of a draft since Goff went first overall in 2016, and as it stands right now, they don't have first round picks in 2020 or 2021.

This offseason, the Rams will also have a number of players slated to become unrestricted free agents, such as Dante Fowler, Andrew Whitworth, Michael Brockers, Cory Littleton, and Greg Zuerlein. It's going to be hard to retain some of those core players, while simultaneously fixing their crappy offensive line, seeing as, again, they don't have high draft picks. 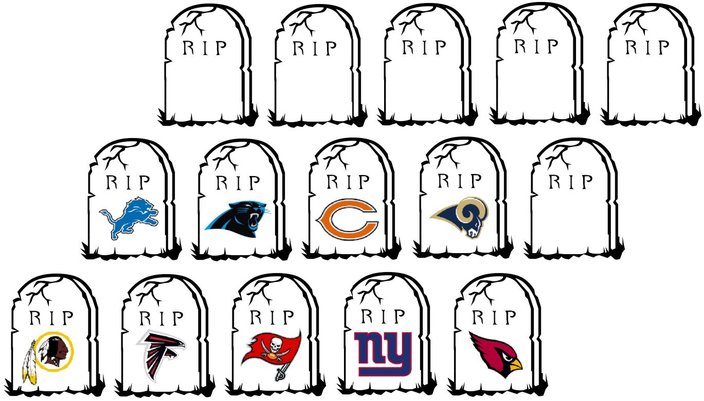 7) Cowboys (7-8): If you believe that the Eagles would beat the Giants on the road, oh, saaayyy, 7 out of 10 times, and the Cowboys would beat an already awful and obviously tanking Washington team at home 9 times out of 10, then that still gives the Cowboys something like a 25 percent chance of stealing this division. By no means is it locked up.

So we'll wait a week before we write their (extensive) obituary.

6) Eagles (8-7): The Eagles have faced (often deserved) criticism all year long, but give them credit where it's due. They were without Lane Johnson, DeSean Jackson, Alshon Jeffery, Nelson Agholor, Jordan Howard, Malik Jackson, Kamu Grugier-Hill, and then they lost both Jalen Mills and Ronald Darby on Sunday, and they still found a way to best a team that has owned them. And they did so convincingly!

If the Eagles win on Sunday, I would consider this season simultaneously disappointing and successful, if that makes any sense.

5) Vikings (10-5): Yesterday, we wrote that the Vikings would be the least ideal team for the Eagles to have to face in the wildcard round, should they make it that far. After the Vikings' Monday night debacle, I'm not so sure about that anymore.

First, let's get to the in-game decision making. Down 7 with 14:14 to go, the Vikings faced a 4th and 1 from their own 45. They lined up with no hesitation like they were going to go for it, but all they were doing was trying to get the Packers to jump offsides, which, of course they didn't. Mike Zimmer then burned a timeout and punted. Terrible.

Later, with 3:41 left to play, facing 4th and 24 with a 13-point deficit, the Vikings punted again. Like, I get that 4th and 24 isn't exactly an easy pickup, but if you punt it's essentially game over.

Zimmer nitpicks aside, the Vikings in general looked awful on Monday night. They had 139 yards, they only had the ball for a little over 22 minutes, and they only had 7 first downs. Seven!

Vikings averaged 2.62 yards per play and had 7 total first downs.

Among teams not named the Jets, those are the worst marks by an an offense in a game this season.

4) Seahawks (11-4): The Seahawks are in big trouble. After suffering a bunch of injuries down the stretch, they'll be without their top two offensive linemen (LT Duane Brown and C Justin Britt), their top three running backs (Chris Carson, Rashaad Penny, and C.J. Prosise), and Josh Gordon recently got suspended.

While that's every Tuesday for the Eagles, other teams don't usually suffer that many injuries and continue to win games.

Anyway, there's pretty much nothing the Seahawks can do to fix their offensive line at this point. At running back, they're bringing back Beastmode.

Marshawn Lynch may be returning to the Seattle Seahawks. More importantly, let’s not forget that he gave us one of the realest quotes of the decade! ✊🏾💯 #BeastMode pic.twitter.com/D27qdRW4zb

To be determined if Beastmode's "Get mine - get got" ratio can stay more on the "get mine" side at the age of 33.

3) Saints (12-3): In my view, the Saints are the best team in the NFC right now, so why did I move them down from the top spot to No. 3? Well, they're likely to be the 3 seed, possibly even with a 13-3 record. Here are the playoff scenarios in both conferences heading into Week 17:

What does the above mean for the Saints? If the 49ers beat the Seahawks Week 17, they'll clinch home field advantage throughout the playoffs. If the Packers beat the Lions, they'll clinch a first-round bye. In other words, the Saints need help to get one of the top two spots. Otherwise, getting to the Super Bowl as anything other than a 1 or 2 seed, while not impossible, is significantly more difficult.

If the Saints get a 3 seed with a 13-3 record and then lose on the road, we'll just have to wait and see what rule changes Sean Payton demands this offseason.

2) Packers (12-3): In the opportunities I've had to watch the Packers this season, they almost never look pretty, but a 12-3 record sort of speaks for itself.

Credit the front office for spending big money on Za'Darius Smith and Preston Smith this offseason. The Smiths combined for 4 sacks on Monday night, and they have 25.5 combined sacks on the season.

1) 49ers (12-3): We're heading into Week 17 and the Niners can wrap up home field advantage throughout the playoffs with a win over Seattle. And yet, despite this team having positioned themselves for a 1 seed, I still can't help but wonder if they're a little fraudy.