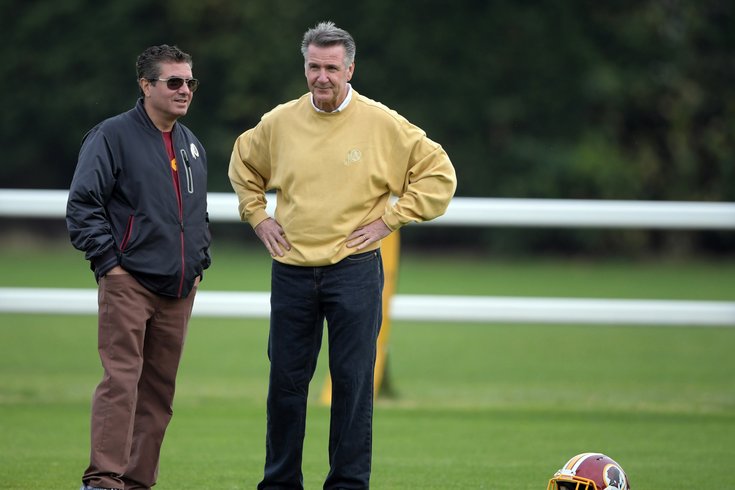 On a short week in between two long road trips, and with the news that Carson Wentz's season could be over, my attention has been held hostage this week, as I'm behind on some of the regular weekly features, such as my NFC Hierarchy/Obituary.

But... we still have a team to kill off, and it's an NFC East team at that, so there's no skipping the hierarchy this week, even if Week 15 has technically already begun. So, this week, we'll write the Washington Redskins' obituary, and sort of phone in the hierarchy.

The Redskins entered this season as a team with a legitimate NFL roster. They had a good offensive line, a smart veteran quarterback, and an up-and-coming defense. Their ceiling wasn't very high, as in, they were never a threat in any way to contend for a Super Bowl, but they had enough personnel to win some games, maybe push for a playoff berth, and keep the fan base "interested enough." And they did, for a short while.

Then they lost most of their offensive line. And then their quarterback. And then their defense started playing like crap. And then they signed a guy off of waivers who has been arrested twice in the last year for domestic violence, without even contacting police for details of his latest arrest, laughably opting instead to ask two of his former five college teammates already on the roster to vouch for his character.

And now, sitting here at Week 15, already on their fourth quarterback this season, the Redskins might presently be the worst --while remaining the most immoral -- team in the NFL.

Before we continue, let's go ahead and update all the quarterbacks who have started at least one game since the Dan Snyder era began in 1999:

Forking over a third-round pick and a good player for Alex Smith, and then subsequently handing him $70-plus million in guaranteed money was always dumb, and it repeated a familiar theme of the Redskins overpaying over-the-hill quarterbacks. Smith had good numbers in 2017, and there was an argument to be made that he was better than Kirk Cousins, in my opinion, but there's perhaps some logic in the notion that a mobile 34-year-old quarterback with below-average arm strength wasn't going to age well.

And sure enough, he didn't. Even before Smith was lost for the season with a gruesome injury, he had a QB rating of 85.7, which is currently 26th in the NFL. Worse, the Redskins didn't learn from the last time they traded with Andy Reid for a quarterback, which is always a terrible idea.

And now, heading into 2019, the Redskins will find themselves in the all-too-familiar position of needing a quarterback, as it appears that Smith's career unfortunately could be over.

If history is any indication, the Redskins' moron general manager, Bruce Allen, will mess that up again if he's allowed to keep his job. If the Redskins lose the rest of their games, as I suspect they will, their record in the nine full seasons Allen has been with the team will be 58-85-1. That would be a winning percentage of 0.406. Allen isn't respected by agents, he's thought of by people who have worked him as a snake, and he didn't even know his own quarterback's name.

And really, Dan Snyder is more at fault than Allen. Incompetent people exist, and sometimes they find their way into positions of power. That's never been more true in our nation's capital, on many fronts. However, bad/unqualified people are usually ousted once they prove their awfulness, but Dan Snyder has allowed this clown to be in charge for almost a decade.

At some point, Redskins fans are just going to have to stop caring, and not allow this regime to continue to take their money, because there's a 20-year sample size that indisputably proves that this team will remain an embarrassment as long as Snyder owns the franchise.