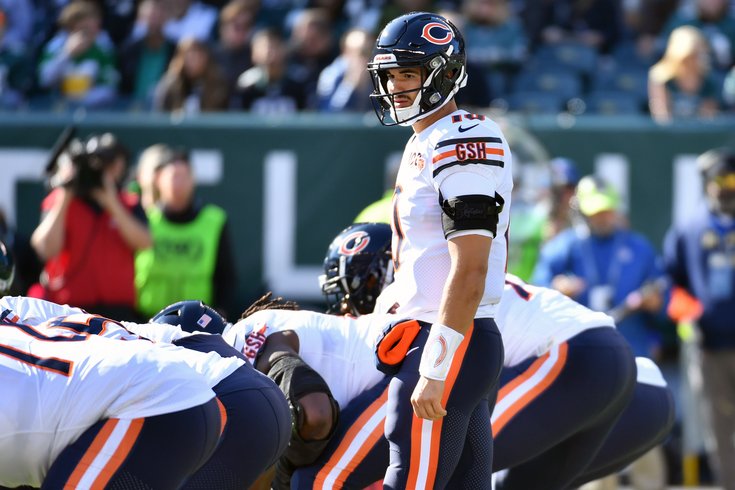 In reality, the Bears were cooked after they went 0-4 during their second quarter of the season.

Week 15 of the 2019 NFL regular season is in the books, and half of the conference is dead and in the ground. This week, we have one new obituary to write. That would be the Chicago Bears.

Bears (7-7): Blame will be placed on Matt Nagy and Mitchell Trubisky for the Bears' downturn from 2018 to 2019, and while a lot of that will be deserved, the reality is that the 12-4 team in 2018 as a whole probably wasn't really that great to begin with, since they had the best injury luck in the NFC a year ago, and they benefited from an unsustainable number of turnovers. In 2018, the Bears led the NFL with 27 interceptions. That was by far the most in the NFL:

As you can see in the chart above, the Bears didn't just pick off opposing quarterbacks. They turned those picks into scores going the other way, and they were third in turnover differential, at +12.

In 2019, through 14 games, the Bears only have eight INTs (one pick-six), and they're -2 on turnover differential.

There's an element of luck to that, but forcing turnovers is also a skill, and they typically start with a heavy pass rush. And yep, as you might guess, the Bears' sack numbers were way down in 2019 (31) from 2018 (50).

In much the same way that the Eagles' offense was hurt by the departures of Frank Reich and John DeFilippo after their Super Bowl season, the Bears' defense was pretty clearly weakened by the departure of Vic Fangio. They went from an elite, playmaking unit to one that is now "just very good."

Going forward, the Bears will have to decide whether or not Trubisky is the guy they want to build their franchise around. If not, they're not exactly in an awesome position to find a new quarterback, seeing as they don't have a first-round pick in the 2020 NFL Draft, and their defense is too good to land them in the top 5-10 in the 2021 draft. If they decide that Trubisky is the hand they're forced to play, he is only going to get more expensive, and Chicago could be looking at an extended period of mediocrity. 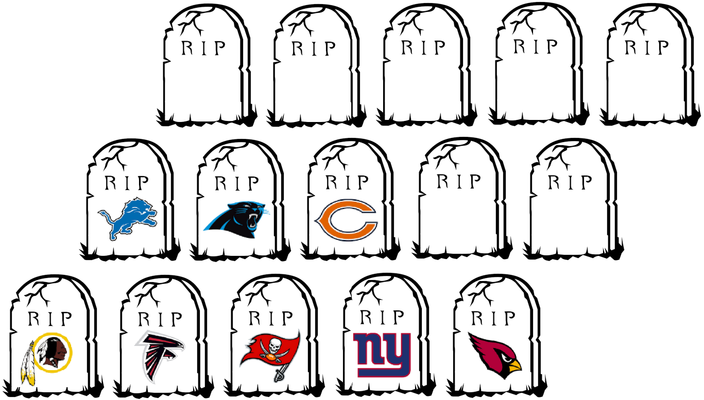 8) Rams (8-6): The Rams have had some absolutely putrid defensive performances this season. In Week 4, they gave up 55 points to the Buccaneers. In Week 12, the Ravens stomped all over them, scoring 45 points and rushing for 285 yards. And then on Sunday, needing a win to keep any realistic playoff hopes alive, they got lit up by the Cowboys, who scored 44 points and ran for 263 yards.

The Rams can still get into the playoffs with two wins and two Vikings losses. Because you can never count out a Kirk Cousins choke job, we'll keep the Rams on life support for one last week.

7) Eagles (7-7): The Eagles now have two straight wins on the strength of Carson Wentz comeback efforts, which is great, except that the Eagles fell behind against two absolutely trash teams in the first place, necessitating Wentz's heroics.

It really is crazy how the Eagles can rarely ever get both their offense and defense to play well in the same game. In Buffalo, maybe? Is that it?

Both units are going to have to play well in the same game this Sunday against Dallas for the NFC East crown.

6) Cowboys (7-7): The Cowboys' formula for success isn't that complicated. When they're able to run the ball well, it has a trickle-down effect to the rest of the team:

On Sunday, the Cowboys were able to run the ball very effectively against the Rams, early and often. However, that has not been the case for most of the rest of the season against their better opponents. In wins, usually against bad teams, Ezekiel Elliott is running for 5.01 yards per attempt. In losses, his yards per carry dip down to 3.75.

However, we should also probably note that at least they're blowing those teams out. On the season, the Vikings have eight double-digit margins of victory, and they have the second-best point differential in the NFC, at +119.

4) Packers (11-3): Even if the Packers lose Week 16 to the Vikings, they'll still hold the tie-breaker over them for the division, and would only need to beat the crappy Lions Week 17 to secure the NFC North.

2) 49ers (11-3): They've been the best team in the NFC all season long, their point differential (+161) dwarfs those of the Seahawks' and Packers', two teams that are ahead of them in playoff seeding at the moment, and if they lose in Seattle Week 17, they're going to have to play a road game in the first round of the playoffs.

And yet, it's hard to feel bad for them. Maybe don't lay an egg against a Falcons team with nothing to play for.

If they win their final two games in Tennessee and Carolina, they are likely to get a first-round bye, and they're going to be a very tough out in the playoffs.