Week 5 of the 2019 NFL regular season is in the books, and we still only have one team in the graveyard. That team hilariously tried to pin the blame of their extremely predictable season on their head coach, when they fired him on Monday.

Anyway, there are no new obituaries this week, but we should have one after Week 6. 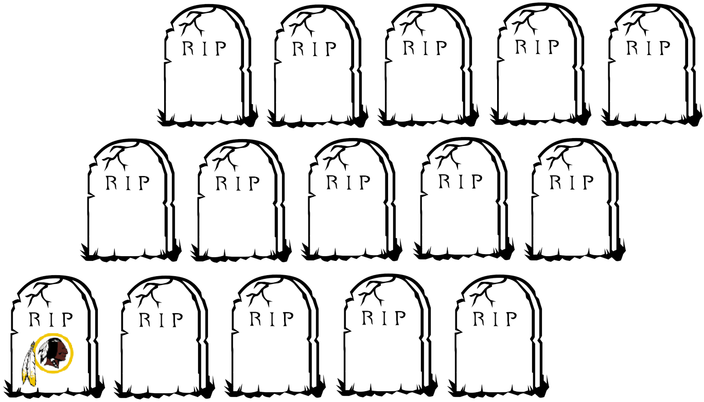 15) Cardinals (1-3-1): Last week there was a game of significant 2020 NFL Draft order importance between the Cardinals and Bengals. I was all ready to kill off the Cards this week, but they won. The grim reaper has to wait one more week.

Side note: I love that the electric football player spinning in circles at the 2:38 mark appears to be a Washington team player. It's their colors, anyway.

14) Falcons (1-4): Of course, this week, there's yet another blockbuster tankathon matchup between the Cardinals and Falcons. The loser will be eulogized next week.

13) Giants (2-3): Nothing against Daniel Jones, but this is me when people refer to Daniel Jones as "Danny Dimes," both now and if he becomes really good.

He's leading the league in rushing yards (587) on a healthy YPC average of 5.6, and 6 TDs. That's all great. Of course, he's going to be dead in December, but whatever.

10) Lions (2-1-1): Because the Lions were on their bye Week 5, I would like to exercise my right not to write about them this week.

MORE: What they're saying about the Eagles: Trade rumors, the DeSean Jackson effect and the future of cornerback position

"The Vikings need to make sure they run the ball at least 34 times every game."

Hang on, let me see if that checks out.

Well I'll be damned. It does.

8) Bears (3-2): The Bears obviously have an outstanding defense. If things break right, you can win the Super Bowl with an outstanding defense and a shaky quarterback (Disclaimer: That is not how I would build a roster). However, the teams that win it all with great defenses typically have a good rushing attack on offense.

Through the first five games, the Bears are 29th in the NFL with 3.4 yards per rush.

7) Cowboys (3-2): The Cowboys dropped their second straight game in which they were favored, with Dak Prescott throwing 3 interceptions. They lost 34-24 at home to the Packers, but in reality it shouldn't have even been that close. Dak also threw a horrendous pass that should have been picked, but was dropped.

The Cowboys kicked a field to cap that drive. And then Dak had another pass that was picked, but was negated by a hands to the face penalty on one of the Packers' defensive linemen.

The Cowboys punched it in for 7 after that lucky break.

On top of the two losses, starting RT La'el Collins added a sprained MCL to his already ailing back, which means that the Cowboys could be without both of their starting offensive tackles, as Tyron Smith is already out with a high ankle sprain.

They're on a bye this week against the Jets.

6) Rams (3-2): A year ago, the Rams' offense was second in yards and second in points. Through five games this season they're 5th in yards and 6th in points. I'm not going to panic on them yet, as they have a lot of talent. That said, while I still believe this team will put points on the board, the following (published after the Rams' Thursday night loss and before the Sunday slate of games) is very much an interesting set of stats:

If you have an offense that is unique, like the Rams have been under Sean McVay, it's only a matter of time before NFL defenses figure out how to stop you, or at least slow you down, and you better have a counter for it. Is this maybe what we're beginning to see in L.A.?

4) 49ers (4-0): Like many of you (I assume), I got my first close look at the Niners on Monday Night Football. They're intriguing, but I think they're a year away.

As for Jimmy Garoppolo, I'm not quite sure what to make of him just yet. #Analysis.

My bigger concern would be along the offensive line. I don't think they can do anything of major significance with that group. Of course, as Booger McFarland said during the telecast, "How I view this team is going to depend on the health of Kyle Juszczyk. They can beat any team on that schedule if he's healthy."

Juszczyk is a fullback who plays about half of their snaps, in case you're unfamiliar. I was writing when he said that, and I had to rewind it on the DVR to make sure I heard that right.

Anyway, the Niners are 4-0 and have put themselves in a great position after their first quarter of the season.

3) Packers (4-1): The player who really popped in the Packers' win over the Cowboys was Aaron Jones. The Eagles' defense bottled Jones up in Week 4, but when he gets some room to run, he looks explosive. He's a weapon in the receiving game, and he's also pretty physical for a smaller back. I love the disrespectful stiff arm at the 2:24 mark on Jaylon Smith:

If Jones can consistently take some pressure off of Aaron Rodgers, the Packers may have something.

And yes, I realize 19 games is an arbitrary number, but it's not my tweet. I'll bet my child he threw at least one pick in that 20th game. Anyway, the point remains that Russell Wilson is awesome, as he proved again Thursday night. Like, this is a ridiculous throw.

And their schedule is pretty easy the rest of the way.