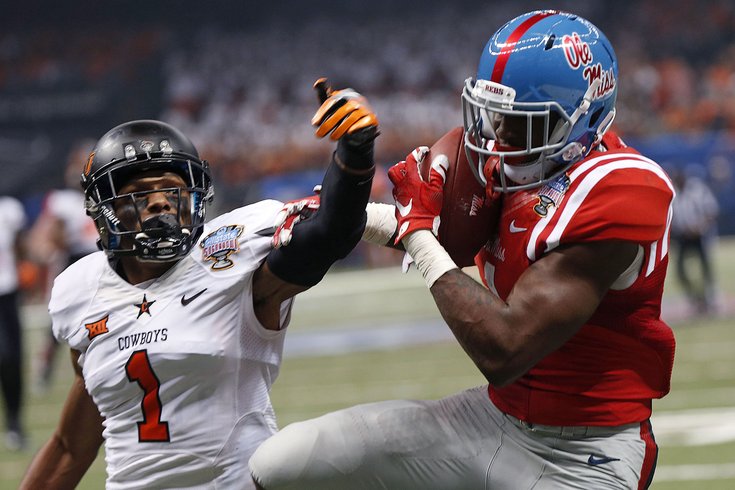 "Megaquon" has been the media and fan favorite so far during the pre-draft process, but Baylor's Corey Coleman might be a better fit for the Eagles.

In the last two drafts, the Eagles spent first, second, and third round picks on Nelson Agholor, Jordan Matthews, and Josh Huff, respectively. But certainly there is room for more playmakers guys who can actually catch in the Eagles' offense.

Riley Cooper and Miles Austin are gone, while special teams guy Seyi Ajirotutu is scheduled to become a free agent. While none of those three players will be significant losses, it does leave the cupboard bare. The only other remaining receivers on the roster not mentioned above are Jonathan Krause, practice squader Freddie Martino, and newly signed bodies Seantavious Jones and Xavier Rush.

At a minimum, the Eagles are going to have to add depth. Here are five wide receivers competing at the 2016 Combine would might make sense for the Eagles:

In 2014, that number fell off some, as they managed 63 pass plays of 20+ yards, which was still very good, but nowhere near the output they had the previous season. Jeremy Maclin had 21 of those.

In 2015, they had 53, which was right at the league average. Jordan Matthews led the team with 14. Here's a snapshot of the Eagles big plays in the passing game over the last three years.

There's little question the Eagles lacked a down-the-field threat in 2015, with Jackson and Maclin having moved on to greener pastures.

Many feel that Laquon Treadwell of Ole Miss is the best wide receiver in this class. Personally, I'm not so sure I wouldn't rather have Coleman if I were the Eagles. At Baylor, Coleman was an incredible deep threat. He averaged 18.4 yards per reception, and he had 20 receiving touchdowns.

Coleman would be a reach at 13, but in a scenario in which the Eagles traded down, I could see him as good fit.

Treadwell has been the most heralded of the 2015 receiving class, at least by the fans and media thus far. While I think Coleman would be the better fit for the Eagles, Treadwell would really be a good fit for anyone, despite a lack of high-end speed. He has good size at 6'2, 210, he's physical, he has great RAC skills, and he catches everything.

Clemson has churned out some decent receivers the last few years:

Peake, like Martavis Bryant, has an impressive size-speed combination, but put up average numbers at Clemson, due in part to having to sit behind other talented receivers.

In 2013, Garrett had a devastating injury that cut his 2013 season short, and limited him physically in 2014, via Kevin Connelly of the Shreveport Times.

In 2015, Garrett broke out again, catching 96 passes for 1588 yards and 8 TDs. The Eagles were willing to take chances on players with serious injury histories under Chip Kelly. It will be interesting to see if they still have as much faith in their sports science program with Kelly gone. Garrett isn't a run after the catch guy, but he uses his size well on vertical routes and in the red zone, which is something the Eagles lack.

Speeeeeeeed. Again, the Eagles lack a true burner who has shown he can take the top off of a defense. Listenbee is a little bit of a long-shot to be a starter in the NFL, but was a track star at TCU, and averaged 19.9 yards per catch in 2015. Listenbee may be worth a late-round flier. He's highly likely to test well in Indy.