All 32 teams have more than half of their players fully vaccinated, according to the league's chief medical officer 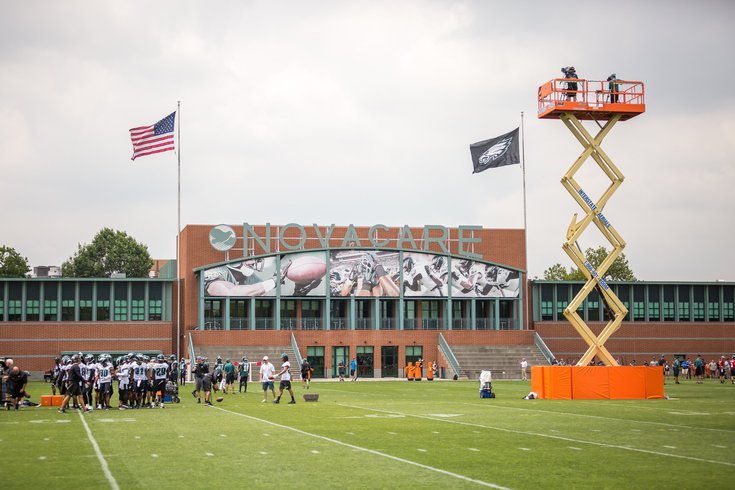 The Eagles would not comment on the percentage of players, coaches and staff who are fully vaccinated or how the team is approaching the league's COVID-19 vaccine policy.

The Eagles will officially open up training camp Tuesday with no shortage of intrigue surrounding the team heading into the 2021 season.

New head coach Nick Sirianni begins his first year in Philadelphia facing many skeptics. Jalen Hurts is out to prove that he — not Deshaun Watson — is the franchise's quarterback of the future. And of course, DeVonta Smith makes his much-anticipated debut in midnight green.

But one of the biggest storylines heading into training camps across the NFL this summer is the rate at which players, coaches and staff are getting vaccinated against COVID-19.

Late last week, the NFL informed teams of its COVID-19 policies and protocols for the upcoming season, which was first reported by NFL Network's Tom Pelissero.

If a game that is canceled because of a COVID-19 outbreak among unvaccinated players cannot be rescheduled during the 18-week regular season, the team experiencing the outbreak will have to forfeit and be handed a loss. Furthermore, the team experiencing the outbreak would likely face financial penalties and possible discipline from commissioner Roger Goodell if found that COVID-19 health and safety protocols were violated.

The protocol that caught most people's attention was the following: if a game is called off and cannot be rescheduled within the regular season, neither team will be paid.

This provision was originally agreed to last year with the players union, according to The Athletic. But last year, when there were no COVID-19 vaccines available, players, coaches and staff were asked to wear masks, practice social distancing and keep their bubbles as small as possible to limit possible exposure to the virus.

With COVID-19 vaccines widely available to the public, teams will be able to more easily track who might have caused an outbreak and whether or not they are vaccinated.

The league and the NFLPA are still negotiating over whether teams will be permitted to ease COVID-19 health and safety restrictions once a certain percentage of players and coaches are fully vaccinated. MLB allows teams to enjoy relaxed COVID-19 health and safety protocols once 85% of a team's players, coaches and clubhouse staff is fully vaccinated.

So it's safe to say that the league will have zero tolerance for teams that experience outbreaks among unvaccinated players and coaches this season.

Play when you're scheduled to play this season or face the consequences. Have a game called off because of an outbreak among unvaccinated players and you'll be punished.

The Eagles would not comment on the percentage of players, coaches and staff who are fully vaccinated or how the team is approaching the league's COVID-19 vaccine policy. But based upon some league-wide COVID-19 vaccine statistics released by the NFL, we have some insight on where the Eagles stand on the matter.

Almost 84% of NFL players have received at least one COVID-19 vaccine dose, according to the NFL Network, which makes one think that teams were well-aware of these protocols before they became public last week.

So what we do know is that at least half of the Eagles locker room is already fully vaccinated. However, that means they could be at exactly 50% or over 90%.

The NFL's COVID-19 protocols for this upcoming season are arguably the strongest stance we've seen taken by any North American professional or collegiate sports league when it comes to getting vaccinated.

Earlier this summer, the NFL said that coaches and staff could only decline the COVID-19 vaccine if they had a medical or religious exemption. Otherwise, one would have to be removed from Tier 1 status, thus limiting their ability to contribute regularly to football operations.

Players, on the other hand, have the CBA as cover to avoid being forced to be vaccinated. So while the league isn't outright mandating vaccines, it's making it almost impossible for coaches without a medical or religious reason to avoid immunization and still remain involved in daily football operations. And now, it's using these new policies to heavily incentivize the players to follow suit.

Policies like the NFL's could be more of what we see from other sports leagues or conferences in the near future. And it's important to know why the NFL promoting COVID-19 vaccines so heavily.

Public health is certainly playing a role. The highly-contagious Delta variant continues to spread across the country, leading to rising infections, hospitalizations and deaths among those who are not vaccinated.

But at the end of the day, this was a decision driven by the bottom line.

After a season where stadiums were largely empty without fans, the NFL is doing everything it can to recoup the money it lost. Stadiums like Lincoln Financial Field will be back at full capacity this fall.

Playing fewer games means less money for all stakeholders — players, coaches, front offices, owners, advertisers, television partners, etc. Having as many players, coaches and staff fully vaccinated is the path to getting the NFL back to where it wants to be financially. The NFL has determined that the COVID-19 vaccine is good for business.

Like last season, the NFL is expecting to play all 272 scheduled regular season games this year. The league has no plans to schedule a "19th week" for the teams that suffer COVID-19 outbreaks during the season.

Last year, teams like the Titans and Ravens had massive COVID-19 outbreaks, leading to games being constantly rescheduled and postponed so that enough healthy players could take the field. It appears that the NFL's days of bending over backwards to make sure teams with COVID-19 outbreaks among unvaccinated players play all 17 games are over.

Making sure everyone gets in line with the NFL’s COVID-19 vaccine policy is probably not the easiest task for a rookie head coach like Sirianni. But even with very few expecting the Birds to contend for an NFC East or Super Bowl title this year, they can’t afford to have COVID-19 vaccinations serve as a distraction.

You don't want to be that player or coach who refuses to get vaccinated and potentially costs the team a game and their respective paychecks. A lack of COVID-19 vaccinations can lead directly to less money, lost games and eventually missing the playoffs.

The Eagles might not be a Super Bowl or NFC East contender in 2021, but if they want to have anything resembling a successful season, they can't afford to have COVID-19 vaccinations serve as a distraction this season.