What they're saying: The Eagles have the fourth-best roster in the NFL 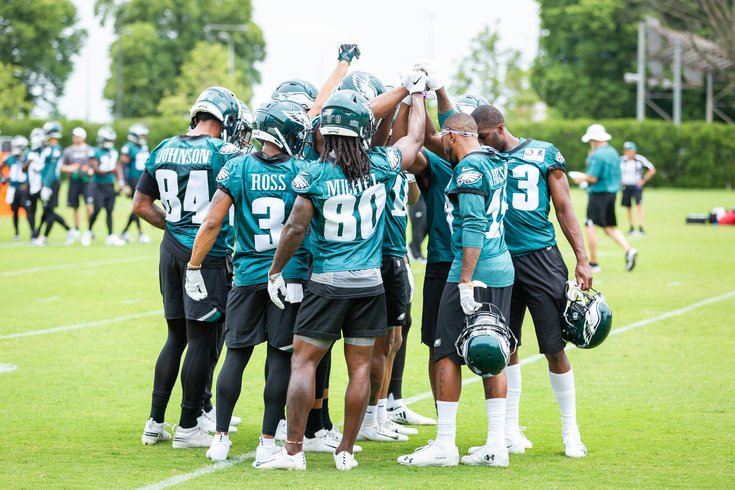 The Eagles look dangerous this season ... at least on paper.

We're currently in the lull between NFL minicamps and the start of training camp in just under a month. But that's just fine, because the NFL news and analysis never stops — not even in the middle of the summer.

As we do every so often around here, we're going to take a look at what other outlets are currently saying about the Philadelphia Eagles, but first, we should probably check in with our own Jimmy Kempski, who wrapped up his annual "Dumpster Fire" series on Friday with the Eagles. Each of his posts are great and I highly recommend you check out each of them:

10 reasons the ...
Eagles | Giants | Washington | Cowboys
...will be a dumpster fire this season

BONUS: Boom roasted: Poking fun at the rest of the NFC

As for Jimmy's criticism of the Eagles, it ranged from the loss of backup quarterback (and Super Bowl LII MVP) Nick Foles in free agency to the sudden lack of depth at defensive end to the team's medical staff. But given that the Eagles are likely to be one of the better teams in the NFC this season, his critiques weren't nearly as harsh as they were for, say, the Giants.

And I'm not making up that part about the Birds being one of the best teams in the league. To prove it, let's get right into our first item of the week...

Looking good on paper, at least

According to the fine folks at Pro Football Focus, the Eagles have the fourth best roster in the NFL, behind the Patriots, Rams and Saints, respectively, with the Bears rounding out the Top 5.

Where are the rest of the NFC East teams, you ask? Well, for starters, the Birds are the only NFC East team in the Top 10, with the next closest being the Cowboys at No. 12. From there, it's a long scroll down the list before you'll come across Washington at 23rd and the Giants at 27th.

Sure, this is only on paper — and a lot can change once the players take the field and actually have to play the games — but if nothing else, it's a credit to what Howie Roseman has been able to do since his return to the top of the personnel department. Here's a look at what PFF had to say about the roster Roseman has put together for the 2019 season:

Biggest strength: Fletcher Cox would likely be considered the NFL's best defensive player if Aaron Donald weren't in the league. Still, Cox is the second-best interior defensive lineman in the league and arguably the second-best defensive player in the NFL. Last season saw him finish second in total pressures (101), pressure rate (16.0%) and pass-rush win percentage (20.1) behind Donald but leaps and bounds above the next-best defender.

Biggest weakness: The Eagles basically fielded a group of off-the-street defensive backs last season after injuries ravaged their secondary. Depth at the position is still lacking, which mirrors the shortage of quality defensive backs in the league as a whole. Their likely starters -- Ronald Darby, Jalen Mills and Sidney Jones -- finished last season by allowing 62.0, 65.3 and 67.4% of passes thrown in their direction to be caught, respectively. They'll have to stay healthy and improve for the Eagles to field a top-half coverage unit.  [espn.com]

Over at SB Nation, they're running a series of big what-if questions, and a recent one revolved around a move the Eagles didn't ultimately make — trading for WR Larry Fitzgerald prior to the 2008 season, and instead opting to draft DeSean Jackson.

The Eagles made a surprise appearance in the NFC Championship Game that season, and ultimately lost to Fitzgerald, Kurt Warner and the Cardinals. So ... what would've happened if the Birds had traded for Larry Fitz?

With Fitzgerald as their star wideout, the Eagles still make the playoffs and finish with a better record than the one they posted in 2008 at 9-6-1. He would be paired up with Donovan McNabb as the quarterback entered the twilight of his career. In his second-to-last season in Philadelphia, McNabb still put decent numbers as the starter. He threw for over 3,900 yards and 23 touchdowns in that season.

Those numbers would have been even better with Fitzgerald as his main target. Fitzgerald’s route running and hands would help establish a solid connection between the two. Fitzgerald would be the first wideout on the depth chart, with Jason Avant on the other side of the field and Brian Westbrook as the workhorse...

Considering [Fitzgerald] was the main reason why Philadelphia didn’t win the NFC Championship in the first place, it feels right to have the Eagles make the Super Bowl in this reality. It would be their second time in five years reaching the big game, giving head coach Andy Reid another shot at the Lombardi Trophy. It’d also set up a rematch with the Steelers, who the Eagles beat 15-6 in Week 3 earlier that season.  [sbnation.com]

And that's only one of the ripple effects that could've altered the NFL had this trade actually gone down...

Keeping with the what-if theme, Dave Mangels of Bleeding Green Nation took a look at what would've happened if the Eagles had never hired Andy Reid. And it's an interesting thought experiment, especially considering, 1) how close it was to not happening, and 2) how intricately the arrival of Big Red is linked to the decision to bring on Doug Pederson, and how that relationship ultimately contributed to Pederson being hired as the team's head coach and leading them to their first Super Bowl in franchise history.

[The NFL Films "Greatest Game" episode about the 1998 NFC Wild Card game between the Packers and 49ers] also has Andy Reid saying that if the Packers had won that game, he probably wouldn’t have been hired by the Eagles. He’s right. Until recently, if an assistant coach was still in the playoffs, teams didn’t hire them. Had the Packers won, the Eagles most likely would not have waited for them to be eliminated from the playoffs, and they would have quickly moved on to the next coach on their list, who was Jim Haslett.

The immediate what if here is obvious: Jim Haslett is a terrible head coach, Andy Reid is a very good one, and the Eagles in the 2000s would not have been the team they were. But the what ifs go far beyond that. Reid’s coaching tree won multiple Super Bowls, altering the history of the NFL. Are you ready to go down the rabbit hole?

Would the Eagles have drafted Donovan McNabb? Five QBs were drafted in the first round of the 1999 draft. Two were good, McNabb and Daunte Culpepper. The others were enormous busts: Tim Couch, Akili Smith, and Cade McNown. Andy Reid is the best QB coach of his era, without his input do they still take McNabb? Couch was off the board with the first pick, but what if they drafted Smith or McNown?  [bleedinggreennation.com]

It gets crazier from there.

Mike Kaye of NJ.com ranked the Eagles' biggest losses of this offseason, and, especially if you already read the Eagles "Dumpster Fire" post, it should come as no surprise who the most costly departure was.

Foles was an inevitable but major loss for the Eagles. He was easily the best backup quarterback in football and provided exceptional insurance for oft-injured quarterback Carson Wentz. While Wentz is on the mend and locked up for the foreseeable future, his backup quarterback matters because of his previous injury history.

Foles led the Eagles during two consecutive playoff runs -- and a Super Bowl win -- while Wentz was sidelined. The Eagles could feel confident that if Wentz went down, the season wasn’t over. Now, the Eagles will rely on fourth-year quarterback Nate Sudfeld as Wentz’s backup. While Sudfeld has flashed in the preseason, he has only thrown 25 regular-season passes. The drop off between Foles and Sudfeld is tremendous based on experience and accolades.  [nj.com]

For better or worse

Over at NBC Sports Philadelphia, they're currently running a series debating whether the Eagles are better or worse at each position in 2019. On Friday, they tackled safety, where the final verdict was that, yes, the Birds are better at safety. Here's a big reason why that should be the case this season.

Why they could be better: Rodney McLeod

How disastrous was Corey Graham thrust into a full-time role after Rodney McLeod’s injury three games into the season? You could point to any number of plays where the 33-year-old’s lack of closing speed was evident, but Graham’s brain fart on 4th and 15 in Tennessee stands out. The blown coverage let the Titans in the game, they came back and the Eagles wound up losing in overtime.

One play shouldn’t define a player, yet it serves as a pretty good example of the drop-off from McLeod to Graham, or Tre Sullivan for that matter. Heck, Avonte Maddox might’ve been the Eagles’ best safety not named Malcolm Jenkins, and he was a rookie cornerback! McLeod started practicing with the team toward the end of OTAs, so it looks like the torn MCL is behind him. From 2013 through 2017, only one other safety totaled at least 362 tackles, 11 interceptions, 31 pass breakups, and 9 forced fumbles, so McLeod’s return is a big deal.  [nbcsports.com]

Which player on the Eagles will be the biggest x-factor in 2019? That's the question they set out to answer over at Pro Football Focus this week. They defined x-factor as "players who each have the potential to make a significant impact in 2019." That's pretty vague, but they had an interesting answer for who that could be for the Eagles.

Avonte Maddox struggled from a grading perspective as a rookie last season but did show a penchant for limiting receivers in his coverage. In fact, he led all cornerbacks by allowing a reception just once every 21.7 snaps he spent in coverage and limited opposing quarterbacks to a passer rating of just 59.9 when targeted.  [profootballfocus.com]

Maddox had a breakout rookie season when injuries forced him into a starting (and starring) role, playing a variety of positions and basically doing whatever defensive coordinator Jim Schwartz asked of him. If he can duplicate that success in Year 2, the Eagles might have something really special on their hands.