Should Eagles have interest in James Washington after Steelers WR requests trade? 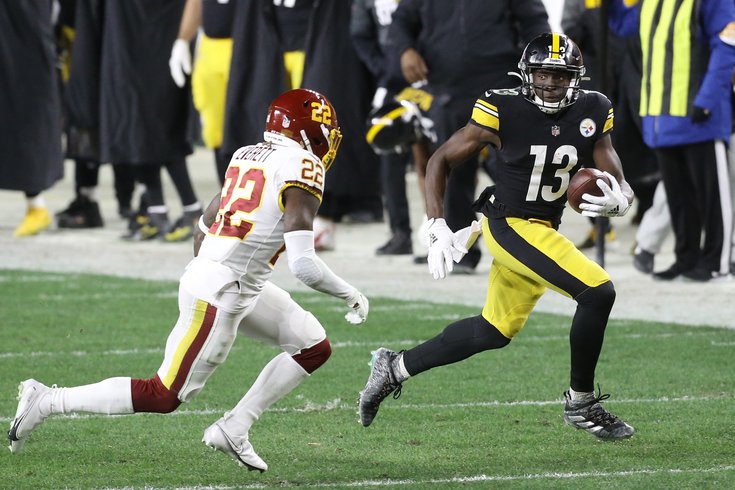 Yes, every time a player becomes available the Eagles are one of the teams mentioned as possibly being interested. In this case, we're beating that inevitable report to the punch. Not only have the Eagles not yet been linked to Steelers wide receiver James Washington, but we don't even know if he's actually available.

In this case, those two things are enough. Let's examine.

News came out on Friday afternoon that the 25-year-old wide receiver was looking for a fresh start, as he's playing in a contract year and wasn't on track to get the kind of touches that would garner a big payday next offseason. So, according to Adam Schefter, he's going to ask the Steelers to trade him to somewhere where he could get more time.

Steelers’ WR James Washington, a former 2018 second-round pick, has approached the Steelers and requested a trade based on his limited playtime last season and so far this preseason, per source.

What he'd cost to acquire remains to be seen, but his cap hit is $1.43 million (according to OverTheCap.com), so the Birds can definitely afford that if they want, especially after restructuring some veteran contracts earlier in the week.

In terms of trade compensation, Washington, has shown flashes but would be the fourth receiver in Pittsburgh, so the Steelers might be willing to take less than he could be worth to another team where he would see increased playing time, like the Eagles. That, plus the fact that he's on the final year of his rookie deal and looking to get paid next offseason, the Steelers might opt to take something for him now rather than nothing for him a year from now.

On the field, Washington may not be a No. 1 wideout, but he certainly brings something to the table. However, there got to be a reason he's fallen out of favor and why the Steelers have three wideouts — JuJu Smith-Schuster, Diontae Johnson and Chase Claypool — listed ahead of him on the depth chart after he led the team in receiving yards two seasons ago.

Here's more on his career so far from SB Nation's Steelers site, Behind The Steel Curtain:

In his three NFL seasons, James Washington has 1,344 receiving yards on 190 receptions in regular season games. Leading the Steelers in receiving yards in 2019 with 735, Washington didn’t come close to that total in 2020 with only 392 yards. The biggest difference may have been the number of targets Washington saw as he had 80 in 2019 and only 56 in 2020.

Of course, Washington has to be on the field in order to receive targets. In 2019 he saw 634 offensive snaps, according to Pro Football Reference, but only had 486 in 2020 despite playing all 16 games. One interesting stat of note is that, according to PFR, Washington‘s drop percentage has increased each of his three NFL seasons. With a 5.3% rate his rookie season, Washington increased to 6.3% in 2019 and 7.1% in 2020.. [behindthesteelcurtain.com]

So, how would someone like Washington fit on an Eagles team that spent its last two first-round picks on wide receivers?

Well, he'd actually fit pretty well given that the Eagles are a team in transition and don't have much set at the wideout position beyond their top two of DeVonta Smith and Jalen Reagor. The Eagles obviously don't want to take snaps away from those two, but it seems new coach Nick Sirianni is looking to spread things out and utilize speed more than his predecessor Doug Pederson did, meaning fewer two-tight end sets and more opportunities for wideouts to get on the field (and get involved).

And beyond that, Washington is young enough that the Eagles could eventually decide he does fit into their long-term plans and could extend him beyond this season. With plenty of question marks still surrounding Greg Ward and Travis Fulgham, would it really hurt for Howie Roseman to bring in another receiver to compete alongside them? Sure, it might mean the end for J.J. Arcega-Whiteside or John Hightower when it comes time to construct the actual 53-man roster, but most fans wouldn't lose any sleep over that.

Bringing in Washington would give the Eagles another weapon on the outside for second-year quarterback Jalen Hurts, provide some depth and injury insurance at one of the team's weakest positions, and ultimately wouldn't cost that much. When you can get a low-risk, high-upside opportunity like this, you take it — even if it's for a guy who is forcing his way out of his current team.

Oh, and for what it's worth, Washington and the Steeler will be in town on Thursday night for the Eagles preseason opener.