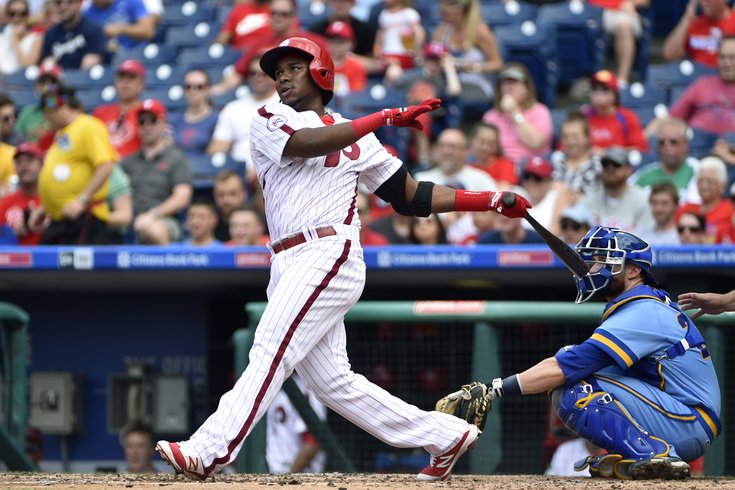 Maikel Franco hits one of the Phillies' three home runs on Sunday.

For the second time in three days, the Phillies otherwise dreadful offense came to play.

It started with some small-ball in the first inning but ended in a way that had the 24,249 in attendance thinking they were watching the 2008 Phillies, even if their uniforms suggested they might be from an even older era.

The Phillies (28-29) belted three home runs in the game – and just missed a fourth after Tommy Joseph's home run was overturned on review due to fan interference – en route to a series-splitting, 8-1 win over the Brewers at Citizens Bank Park on Sunday.

Aaron Nola continued the trend of Phillies' starters not pitching deep into games, as he was lifted for a pinch hitter in the bottom of the sixth inning after throwing 103 pitches. Given that the score was 8-0 at the time, there was no sense in sending the young righty back out for another inning.

But in his six innings of work, Nola looked sharp and for his effort picked up his fifth win of the year to improve to 5-4. He scattered eight Brewers' hits and a pair of walks while striking out nine (tying a career-high) and keeping the opposition off the board to lower his ERA to 2.65 on the season.

Milwaukee's lone run was of the unearned variety and came in the top of the eighth inning off Elvis Araujo after Colton Murray pitched a scoreless seventh. A wild pitch by Araujo allowed Domingo Santana, who reached with a leadoff walk, to move into scoring position before Ramon Flores drove him home with an RBI single.

David Hernandez finished the game on the mound for the Phillies with a scoreless ninth inning.

Nola's high pitch to that point can be attributed to the fact that Milwaukee had a runner on base each of his six innings, something you wouldn't expect given how well the 23-year old pitched.

Nola now has 9 strikeouts as well as my heart pic.twitter.com/TdCRFTTpGr

"It was very strange," Nola said in the clubhouse after the game. "I told the infielders I was going to give them a 1-2-3 inning at some point, but it didn't happen. I got in jams pretty much every inning. You know, I'd get the leadoff guy out and then give up a hit. Or I'd get two outs and they'd get a hit. But I battled hard and kept the team in the game, which was the most important part."

And it was that – his ability to work out of jams – with which manager Pete Mackanin was most impressed.

"Nola pitched very well," Mackanin said. "He had runners on base every inning and pitched out of some jams. Never lost his composure; that's the thing about him that I like so much. He's just cool, calm and collected out there. He does a good job and [today] he gave us what we needed."

Even on a day when the big story was the offense, Nola got some praise another young Phillie.

"It's pretty amazing to watch him," said third baseman Maikel Franco, who hit a solo home run in the win. "He's got really good command. He's got a lot of 'stuff.' Very good breaking ball, good fastball. For us, for everybody, it's fun to just go out there and help him and try to win the game that day because we know he's going to do a pretty good job."

But, for a change, it was Franco and the rest of the Phillies hitters that stole the spotlight from Nola.

They combined for 13 hits on the day, tying their season high, and scored at least one run in four of the first five innings. They also did a few things they've been thus far unable to accomplish this season.

They were so prolific – at least compared to what we've become accustomed to seeing – that Mackanin joked that he needed "a cheat sheet" for his postgame meeting with the media.

Here's a look at some of their many highlights on the day:

•    Their five-run fifth inning marked a season-high for runs scored in an inning. The Phillies' previous high was three. For this Phillies team, five runs is a lot for an entire game, let alone a single inning.

The Phillies scored season-high 5 runs in that inning.

They’ve only had 6 GAMES so far this year in which they’ve scored more than 5 runs.

But maybe that had something to do with the competition?

Today marks the 12th time this season the #Phillies have scored 5+ runs in a game.

Five of those 12 games have been against the Brewers.

Or, perhaps, the uniforms?

Also, two of them have come while wearing the throwback uniforms. Just saying… https://t.co/zfuoQe3aQD

•    In that fifth inning, the Phillies hit back-to-back home runs (Jimmy Paredes and Cameron Rupp) for the first time all season.

Had it not been for the fan interference call on Tommy Joseph's home run ground-rule double – or had the ball been hit just a few feet further – we might be talking about back-to-back-to-back homers.

gonna be a double, but we'll take it pic.twitter.com/78jImwAb0q

•    Odubel Herrera tied a career-high with four hits. He finished the game 4-for-5 with a pair of runs scored. It's the first time since May 27 that he's had multiple hits in a game and the Phillies' leadoff hitter was hitting .148 (4-for-27) in over his last eight games.

•    Seven of the Phillies' eight starting fielders (not counting the pitcher) recorded at least one hit in the game. And four of them – Herrera, Rupp, Joseph, and Paredes – had multiple hits.

However, the only guy to not record a hit – Freddy Galvis – got a special, unprompted shoutout from his manager after the game. [Note: I'm pretty sure this was one of the things he scribbled down on the aforementioned cheat sheet.]

"Also, I wanted to mention that Freddy didn't get any hits, but in that first inning he got that run in from third base," Mackanin said. "And later he bunted that runner over to third, and those little things lead to runs. I just want to give him a shoutout for that, because it was good to see."

That's cool to see on a day in which there were plenty of good things to talk about from the offense. And it's even better to see that Mackanin realizes this scoring burst was just an outlier. They're going to win more games on plays likes the ones Galvis made than they will by stacking extra-base hits on top of one another as they were able to do in that fifth inning.

•    Franco homered for the second time in the last four days.

But for the young third baseman, there have been some struggles as of late. After the game, Mackanin said that Franco could benefit from a game like today, one in which the Phillies scored plenty of runs and he didn't feel the added pressure of trying to win a game (on top of the pressure that comes with trying to break out of a slump).

He also said that the presence of Joseph behind him in the order. As will that of Jimmy Paredes, who hit his first home run since joining the Phillies late last week.

"When you don't have a lot of hitting going on around you, it's contagious," Mackanin said. "It's the same way when everybody's hitting. For example, Franco feels like he has to do more because he knows that everybody is counting on him."

But it's more than that. If the guys around him are getting on base more consistently, Franco will begin to see better pitches because he suddenly becomes a threat to score a run.

"In these games, I've been seeing better pitches, more pitches [to hit]," he said. "But like I said, I just have to keep doing everything I can to be ready to help my team win."