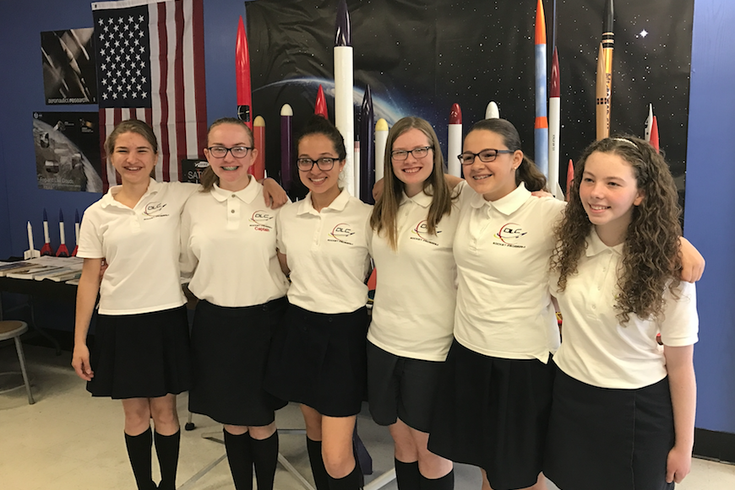 How do you blast a raw egg exactly 775 feet into the air within a span of 41 to 43 seconds? And then bring that egg back to earth uncracked?

That's the challenge for the Our Lady of Calvary Catholic School rocketry team, which has spent hundreds of hours perfecting their model rockets on their three-year journey to a national rocketry competition in Manassas, Virginia.

The "Soaring Six" — the team's nickname — will participate Saturday in the Team America Rocketry Challenge, a national championship featuring the 100 best rocketry teams in the United States.

To get there, the "Soaring Six" had to perform better than 736 other teams to gain a spot in the championship as one of just four middle school teams competing. The team will stand out no matter what in the STEM challenge: it is the only all-girl squad.

That had Philadelphia Mayor Jim Kenney comparing them to the women featured in the recent movie "Hidden Figures," which depicted the contributions made by a trio of African-American women to send American hero John Glenn into space.

"Women have been kept down too long and been told that they can't do certain things because of their gender," Kenney said. "It's totally wrong. And these young ladies prove it now and will prove it throughout their careers."

Kenney joined the "Soaring Six" for a demonstration Tuesday at the Northeast Philadelphia school. Hundreds of students gathered to watch them blast a pair of smaller models about 80 feet into the air.

On Thursday, the rocketeers will head to Washington, D.C., where they will meet Congressional leaders on Capitol Hill. And then, of course, send their rockets skyward — higher than the Washington Monument, in fact.

"All of us are so excited," said Korianna Rosenthal, the team's captain and one of its five eighth-graders. "We're going to get to meet so many important people in this industry. Hopefully, we'll come out of it as U.S. champions."

The rocketry team formed three years ago under the instruction of Gregory Severino, a math teacher who urged his students to consider applying his lessons outside the classroom. Since then, they have designed and launched scores of test rockets.

Amazingly, the girls claim they've only ever broken three eggs, which get placed in a foam compartment near the top of the rocket.

But they have endlessly tinkered with their rocket set-up, to the point that they nearly notched a perfect score when they qualified for the national competition on April 4.

"For a middle school team to get into a contest that's generally dominated by high schools is quite an accomplishment," Severino said. "I'm very optimistic about their chances."

Severino said he quickly realized that this group was committed to seeing a process through to the end.

Today, Our Lady of Calvary has its own "rocket lab" scattered with rocket parts and decorated with the team's many designs. Dozens of model rockets — of varying sizes — sit perched on one table in the lab, a testament to the 15-plus hours the team contributes every week.

"I really love finding people I have so much in common with and being able to work with them," student Fiona Buck said. "It's really nice." 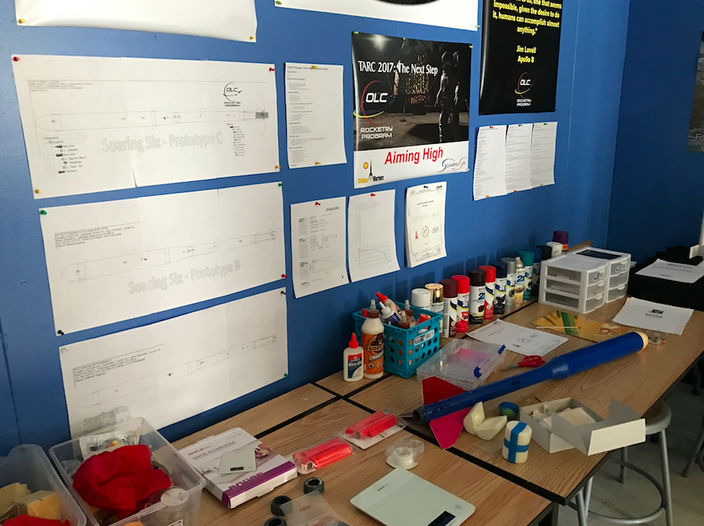 The 'rocket lab' at Our Lady of Calvary Catholic School dozens of supplies needed to construct the model rockets that the 'Soaring Six' blast hundreds of feet into the air.

To win, the "Soaring Six" likely will need what they call a "bullseye" – a perfect score.

The top placing teams will split more than $100,000 in cash and scholarships, according to TARC. The overall winner will travel to Europe to compete in the International Rocketry Challenge.

To ensure a successful launch, each of the "Soaring Six" have different roles.

Sophia Rosa prepares the rockets immediately before launch, ensuring the parachute is folded properly and preparing the booster section.

Gianna Brock serves as the chief designer and Ilinca Vilceanu handles construction. Annalise Schuck, the lone seventh-grader on the team, leads the art design and fin construction. Buck assists with construction and retrieves the rockets after they descend.

And as captain, Rosenthal makes the final call before launching their models hundreds of feet into the air.

"We're all good at doing different things," Vilceanu said. "It's a well-oiled machine. It makes it a lot easier to get flights off."

On Saturday, they'll once again attempt to blast an egg 775 feet into the air — 200-plus feet higher than the Washington Monument — and bring it safely back to the ground.

It will complete a journey that not only provided invaluable math and science lessons, but strengthened friendships.

Said Brock: "I wouldn't want to do this with any other people."