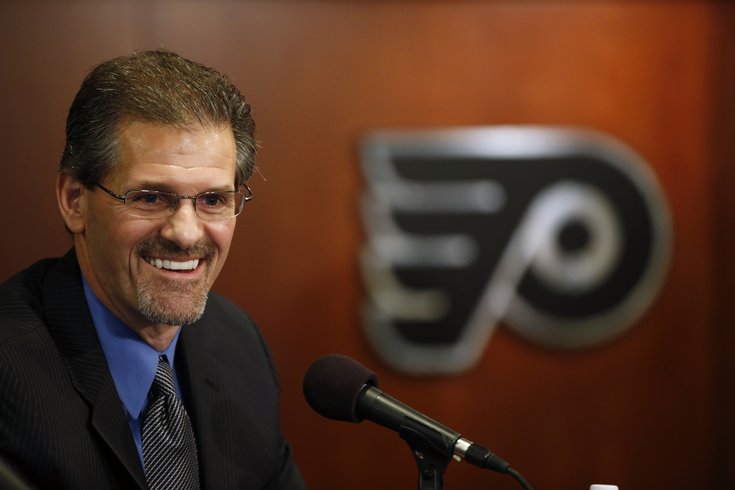 Over the past few days, Flyers president Paul Holmgren, head coach Dave Hakstol and most of the players have been asked what areas need to be targeted this offseason if the team is going to take the next step in 2016-17.

They all, predictably, passed the buck to general manager Ron Hextall.

So Ron, what do you think the team needs to upgrade? Looking at a playoff series in which his team only managed six goals in six games (blue-chip defensive prospects in the pipeline come into the equation, as well), the answer wasn’t all that hard to figure out.

"We need some upgrading up front,” Hextall said Wednesday. “We need some goal scoring/playmaking, would be our number one need."

Hextall wants to bring back Brayden Schenn, in part because he figures that the 24-year-old will continue to improve on his best season to date. The same logic applies to 23-year-old Sean Couturier, to whom Hextall handed an extension last offseason. Hextall also figures that Jake Voracek will bounce back from a season in which he only managed 55 points in 73 games.

Additional size could help boost offensive production. According to a post by hockey journalist James Mirtle at the beginning of 2015-16 season, the Flyers ranked 24th and 22nd among NHL teams in height and weight, respectively. These aren’t your father’s Flyers.

The roster has undergone some changes since then, but it did feel like the Flyers had trouble matching Washington’s size and physicality in the recent six-game playoff series.

“We've got to get bigger,” Hextall said. “Part of getting better is getting bigger and getting a little more skill and a little bit more depth.”

In regards to free agency, Hextall said that he would like to add a piece up front. Depending on some of the roster decisions that he makes this offseason, Hextall will have money to play with for the first time since he took over two years ago.

“Well, yeah, we weren’t in a very good position a year ago,” Hextall said. “So, are we in a better position? Yes. But we gotta be careful, depending on what happens between now and then.”

... the whole thing that we started to build two years ago, our vision is the same and we're on a path, and we're a lot closer than we were two years ago.

Hextall is dealing with some of the same philosophical decisions that Sixers president of basketball operations Bryan Colangelo will face this summer, albeit at a much different stage. Basically, how do you find the balance of improving the team now while also avoiding the situation three years from now where it’s impossible to keep one of the team’s homegrown stars?

Over the past year, Hextall has made some shrewd moves to clear major salaries off the books. Now he has to figure out how to use some of that newfound cap space that he created.

“I'm not an impatient guy by nature,” Hextall said. “Maybe I was a little bit on the ice, but I've been off the ice for 17 years or whatever it is, so the whole thing that we started to build two years ago, our vision is the same and we're on a path, and we're a lot closer than we were two years ago."

Both Hextall and Hakstol were surprised by the three-game suspension given to Schenn on Tuesday. And considering that the plan is for the restricted free agent to return next year (“In the end, we’ll get it done” were some of Hextall’s words), the Flyers are likely going to appeal the ruling.

“I was very disappointed and we will consider the appeal process,” Hextall said. “Whether we will or not, we haven't dug into it hard enough yet, but we will certainly consider it."

Hakstol said that he didn’t come in with any preconceived notions about the hit (“It’s only been a few months, but I’m learning,” he quipped), but the head coach was surprised nonetheless.

Hextall stopped short of saying that the team would definitely appeal the ruling. They’re currently looking into the procedure, something that they aren’t familiar with.

“I have Barry [Hanrahan, assistant GM] looking at it right now to see what the process is,” Hextall said. “I know they told me we’ve got time because it’s the end of the season.”