Umberger, Schenn among many decisions Hextall will make in offseason

On the day that the Flyers cleaned out their lockers last year, Vinny Lecavalier was the veteran forward who was answering questions about his uncertain place in the team’s lineup going forward. Tuesday, it was R.J. Umberger.

Umberger, who turns 34 next week, managed only two goals in just 39 games this year. Acquired from Columbus in exchange for Scott Hartnell two offseasons ago for a second go-round in Philly, Umberger found himself watching games in the press box far more frequently than playing in them at ice level.

To his credit, Umberger addressed the elephant in the room when it was finally brought to his attention: Does he think a buyout is coming?

“I expect one,” Umberger said. “I mean, who wouldn’t after my season? But again, that’s up to them, that’s their decision. Business side of it, you can’t control that.”

Back in 2014, a major part of Umberger’s appeal to the Flyers was that his contract expires two years before Hartnell’s does. Fast forward to today, here is the decision that general manager Ron Hextall faces this summer:

The decision will hinge on what Hextall decides to do in free agency, both in terms of retaining his own players and looking around the league. It’s a brave new world we’re entering, one in which the Flyers have some cap space.

Regardless of whether he stays or goes, Umberger still believes he has something left to offer an NHL team. Although the last two years haven’t gone as planned, he stressed a need to move on and put them in the past.

“That’s Hexy’s decision to make,” Umberger said. “Wherever I’ll be, I’m going to come [into camp] in the best shape like I always do and ready to just have a better year. I know I can play better. I know I still have stuff in the tank.” 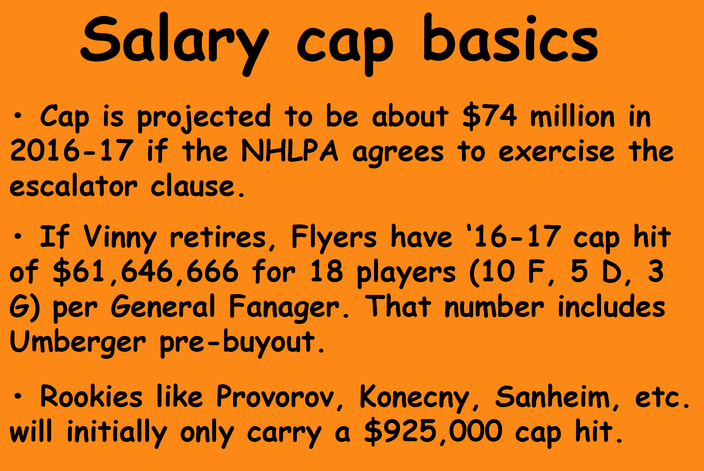 Brayden Schenn is on the other end of the spectrum from Umberger. His best years are likely ahead of him, not behind. He’s coming off a season in which he scored the most points of his career (59 in 80 games), not the fewest. And as a restricted free agent this offseason, he will force Hextall to make a decision on how much he should be paid to play, not go away.

(Oh, yeah. Umberger didn’t get suspended for three games to begin next season, either.)

The Flyers and Schenn didn’t discuss a new contract during the season, a stance that seemed to originate with the team. How that affects offseason negotiations is anyone’s guess, including Schenn’s.

“I’ve said it all along, it wasn’t my idea that there hasn’t been talk since day one of the season,” Schenn said. “I guess that’s what the summer is for and I guess we’ll see what happens after that.”

Schenn, who can play both center and on the wing, figures he will at least begin next season on the outside if he remains in Philadelphia. The 24-year-old wants stay here for a while, if possible.

“You want to be here long-term,” Schenn said. “I believe in this team, I believe in the guys in that locker room. I guess we’ll see what happens, see how it plays out.”

“I’ve been here for, jeez, five years now. If they want to go long-term with me, obviously I want to be a part of this team.”

•    Sam Gagner didn’t sound overly confident that he’ll be back next year: “I don’t know, we just talked briefly,” he said of Ron Hextall. “But there’s a lot of things for him to sort out, so I’m not too sure.”

•    Ryan White, who found his niche playing on “The Untouchables” fourth line under Dave Hakstol, definitely wants to stick around: “Knowing the system, knowing the coach and having the coach's respect and him liking you and playing you is a big thing. I think that's a tough thing to find sometimes in this league. It's almost to the point where, what do you want to give up to give it away? And I think that's kind of a line we have to tow.”

•    Ditto for Radko Gudas: “Obviously I thought I had a good year and I want to stay here as much as possible. I really enjoy playing for Philly. I’m looking forward to staying here.”