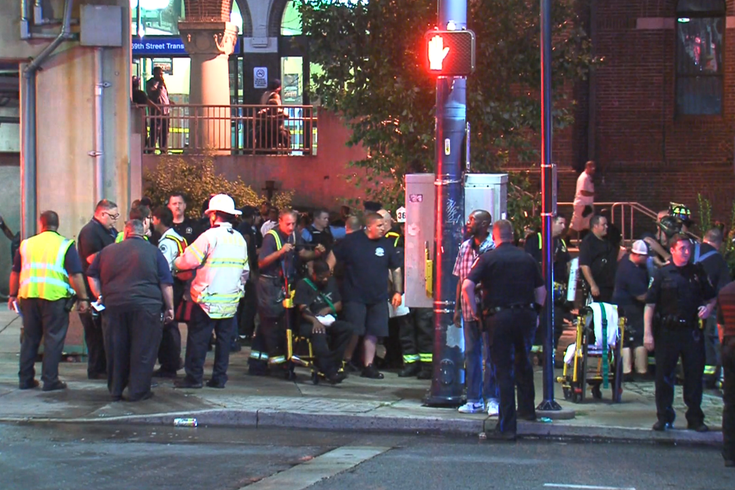 The scene after a train crash in Upper Darby just after midnight on Tuesday, Aug. 22. SEPTA said a Norristown High Speed Line train crashed into an unoccupied, parked train at 69th Street Terminal in Upper Darby, causing 42 injuries, including the operator.

A preliminary report from the National Transportation Safety Board is giving some insight into what caused a train crash aboard SEPTA's Norristown High Speed Line last month that left more than 40 passengers injured.

The train's operator told investigators that slippery rails may have played a role in the crash with an unoccupied, parked train at 69th Street Transportation Center in Upper Darby on Aug. 22 shortly after midnight.

The operator had made eight runs between the Norristown Transportation Center and 69th Street during the day and didn't encounter any braking problems prior to the incident, according to the report released Tuesday, but did slide past the passenger platform after some light rain at the Gulph Mills Station, 17 stops away from the crash at 69th Street.

"The controller stated that typically, if several slippery rail reports are received, an announcement regarding slippery rail is transmitted to all train operators," the report stated. "However, in this situation, this was the only report of slippery rail received."

SEPTA was notified of the missed stop and permitted the operator to reverse the train to get to the platform, according to the report. The preliminary results also found that the operator was given notification to slow down when approaching 69th Street but was unable to, hitting the unoccupied car.

Forty-two passengers, including the operator, were taken to local hospitals, though no one sustained life-threatening injuries at the time, according to SEPTA.

The NTSB's preliminary findings come months before a fuller report more likely to determine a probable cause.

SEPTA has declined to comment on the NTSB's report.