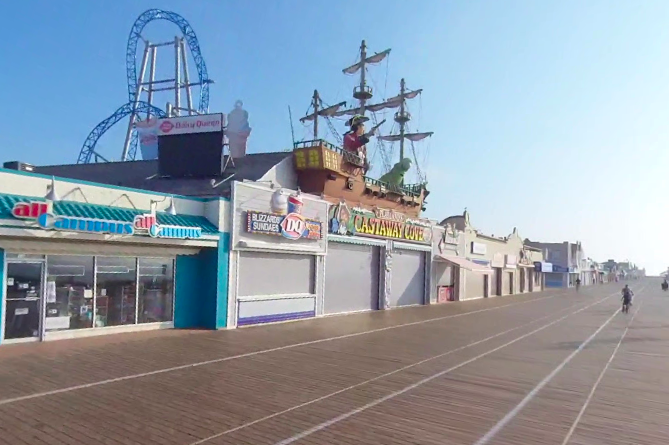 Playland's Castaway Cove was among several Ocean City businesses damaged in an accidental fire on Jan. 30, 2021.

The Jan. 30 fire filled the boardwalk with thick black smoke as it took over Playland's Castaway Cove, the Hamburger Construction Company restaurant, a juice bar and a Dairy Queen, NBC10 reported.

Ocean City spokesman Doug Bergen said the cause of the fire was an undetermined electrical source near the front of Playland's, according to The Press of Atlantic City. No one was injured.

The amusement park had been storing ride parts inside the building for the winter, but no one was inside at the time of the fire. The outdoor rides of the nearly 60-year-old Jersey Shore attraction were not harmed during the fire, but its arcade and offices burned down.

Investigators from the federal Bureau of Alcohol, Tobacco, Firearms and Explosives worked with the Ocean City Fire Department and other local officials to determine the cause. They examined the pattern of fire alarms, eyewitness accounts, photos and videos, forensic evidence and site excavation findings, 6ABC reported.

Playland's has indicated it will open in the spring while rebuilding the damaged portions of the park.

"If anybody knows us, we're going to come back with something bigger, that's for sure," Brian Hartley, vice president of Playland's Castaway Cove, told 6ABC.

"We struggle to comprehend this mornings events and what will be of the next few months, but we can assure you this, WE WILL REBUILD!!" Playland's Castaway Cove said in a Facebook post Jan. 30. "We have a secondary entrance that will now be our main entrance for the foreseeable future."

Though Playland's expects to bounce back from the fire, the owners of the Hamburger Construction Company are unsure about the restaurant's future. A family member of the owners is selling $3 stickers to create a memory book and canvas commemorating the 43-year-old business.

"Although we do not know what the future looks like for HamCo, we all have memories of what it was," the family member wrote. "Four generations of family and friends worked, played, and made some dough in the burger stand at 10th & Boardwalk. We made lasting friendships while we learned how to hustle."

The fire came at a rough time for the boardwalk. Tourism revenue has tanked amid the pandemic. The New Jersey tourism industry declined 24% in 2020 and travel spending went down 86% last April, the Asbury Park Press reported.

However, economists predict larger crowds this summer will boost the local economy. They expect it to recover by 2022.

Another iconic Ocean City Boardwalk business, Gillian's Wonderland Pier, is facing a sheriff's auction because its owners are behind on $8 million in mortgage debt. Its owner, Ocean City Mayor Jay Gillian, said they already secured the funds to prevent the auction.