Freeholder: 'Your hate crime is not going to stop us' 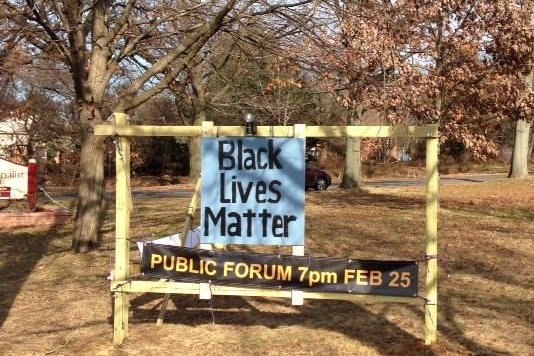 This Black Lives Matter banner was put up outside the Unitarian Universalist Church in Cherry Hill after vandals stole a similar banner from outside the church for the second time this month.

A South Jersey official has a message for the vandals who twice ripped down Black Lives Matter banners from outside the Unitarian Universalist Church in Cherry Hill.

Camden County Freeholder Jonathan Young Sr. said in a statement Tuesday the community’s commitment to discussing the issue of race has been made stronger after the attempted actions of "cowards."

"Your hate crime is not going to stop us from addressing the current climate of race in America today at a public forum Thursday evening," Young said.

Unitarian Universalist Church officials said earlier this month that a similar Black Lives Matter banner hanging outside their property on King's Highway had been stolen.

On Sunday, a second set of banners were taken once again and the wooden framework holding the signs was damaged. The next day, the church replaced them with new banners.

Church officials said a police report was filed in both instances. A spokesperson for the Cherry Hill Police Department was not immediately available for comment.

In his statement, Young encouraged whoever had taken down the banners to, "attend the forum and learn something."