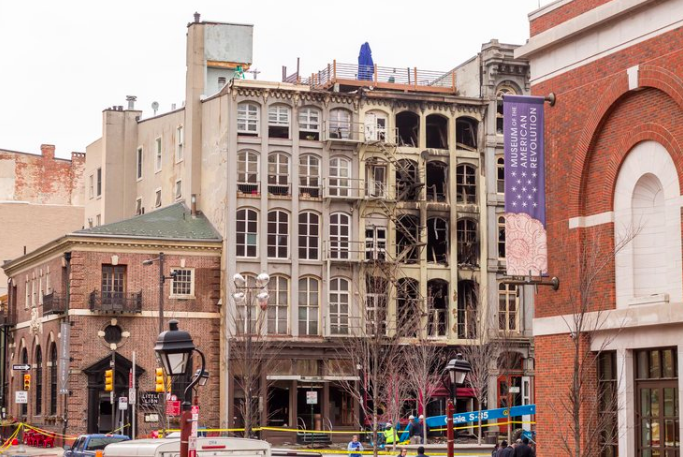 A destructive fire along along the 200 block of Chestnut St. on Feb. 18, 2019 was allegedly started by two brothers who wanted to commit insurance fraud by burning the site of their shuttered business, according to federal prosecutors.

Two brothers who owned several businesses in Philadelphia have been charged with arson in the Feb. 2018 fire that displaced nearly 160 people and led to the demolition of an apartment building on Chestnut Street, federal prosecutors announced Thursday.

Imad Dawara, 39, of Swarthmore, and Bahaa Dawara, 31, of Woodlyn, both face multiple felony counts in an indictment that outlines an alleged plan to commit insurance fraud at one of their properties, a former hookah bar.

The brothers, American citizens who were born in Syria, owned various restaurants and clubs in Philadelphia from late 2012 to early 2018, when the fire occurred at 239 Chestnut Street.

The Dawara brothers allegedly were struggling at their Chestnut Street businesses, Barra and B-Side Hookah Bar, which were adjoined in the same property. Prosecutors said they had a history of fighting with their landlord and were told they were in breach of their lease in 2015. The brothers did not have proper permits to continue running the establishments and were behind on payments.

At one point, Imad Dawara allegedly threatened the landlord, claiming he'd destroy the property if an attempt was made to evict him and his brother.

In Nov. 2015, the Philadelphia Court of Common Please prohibited the brothers from continuing to operate the businesses until they obtained proper permits. The landlord allegedly sent the defendants a notice of intent to terminate the lease at this time.

It wasn't until two years later, in Oct. 2017, that the Dawara brothers ceased all business operations at the location. Attempts to sell the business had failed because the brothers did not have a lease. They allegedly owed the landlord $64,000 in overdue payments and were told to vacate the property by Feb. 2, 2018.

On that same day, prosecutors claim Iman Dawara contacted an insurance broker to obtain a policy at the property, which they had not on the business in over a year. 16 days before the Feb. 18 fire, the brothers took out a policy that provided coverage in the event of an accidental fire.

Coverage for a fire would have consisted of $500,000 for property damage and $250,000 for business interruption, according to the property.

Imad Dawara repeatedly asked the broker how he would be paid "if there was a fire," prosecutors said.

At 3:11 a.m. on the morning of Feb. 18, the brothers allegedly started a fire in the basement of 239 Chestnut Street, destroying the entire building. The 200 block of Chestnut Street was closed for months and multiple businesses were forced to close, including The Best Western, The Little Lion, Gina’s 45, and Capofitto Pizza & Gelato.

Prosecutors claim both brothers lied under oath about their whereabouts and activities on the night of the fire. While Imad Dawara remained in the office of his other business, the B-Side Complex on Delaware Avenue, Bahaa went to the 239 Chestnut Street to start the fire, according to the indictment.

“No one in Old City will forget when this arson lit up the night sky,” said U.S. Attorney William M. McSwain. “This impacted the heart of our nation’s most historic square mile, which includes Independence Hall and the Liberty Bell Pavilion just blocks away. Many people’s lives were permanently altered, losing their homes and livelihoods. If not for the heroism of the Philadelphia Fire Department, the devastation from that night would have been unthinkable. The City is forever in their debt.”

The brothers are charged with arson, conspiracy, wire fraud and mail fraud, among other offenses.

If convicted, both brothers face a maximum sentence of up to 20 years in prison.