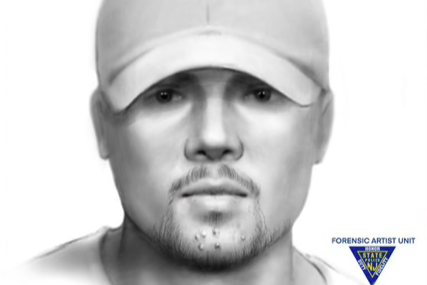 Cumberland County prosecutors believe the man in the composite sketch above may be linked to the disappearance of five-year-old Dulce Maria Alavez, who went missing from Bridgeton City Park on Sept. 16, 2019.

A witness in the disappearance of 5-year-old New Jersey girl Dulce Maria Alavez has provided authorities with a description enabling police to develop a composite sketch of a person of interest.

Cumberland County prosecutors released the sketch on Tuesday,  nearly a month after Alavez disappeared from Bridgeton City Park. The man in the sketch is described as having been present at the park, with two children under the ages of 5, around the time Alavez, disappeared.

He could potentially be another witness.

Authorities said the description did not come from Alavez's 3-year-old brother, who was present with the girl at the time she disappeared.

A $52,000 reward has been posted for anyone who comes forward with information leading to Alavez being found. Earlier this month, police released the frantic 911 call Noema Alavez Perez made on the afternoon of Sept. 16 after her daughter went missing.

Investigators say an unknown man may have led Alavez into a red van with tinted windows around 4:20 p.m. that afternoon. The man initially was described as a light skin, possibly Hispanic male, between 5-foot-6 to 5-foot-8 with a thin build, no facial hair and acne on his face. Police said he was wearing orange sneakers, red pants and a black shirt.

On Tuesday, prosecutors added that the person in the sketch was reported to have been wearing a white T-shirt, blue jeans and a white baseball hat.

Anyone who can identify this individual or who has information about the case is asked to contact Bridgeton Police Department at (856) 451-0033.