Owner John Middleton says Phillies can spend, but that doesn't mean they will 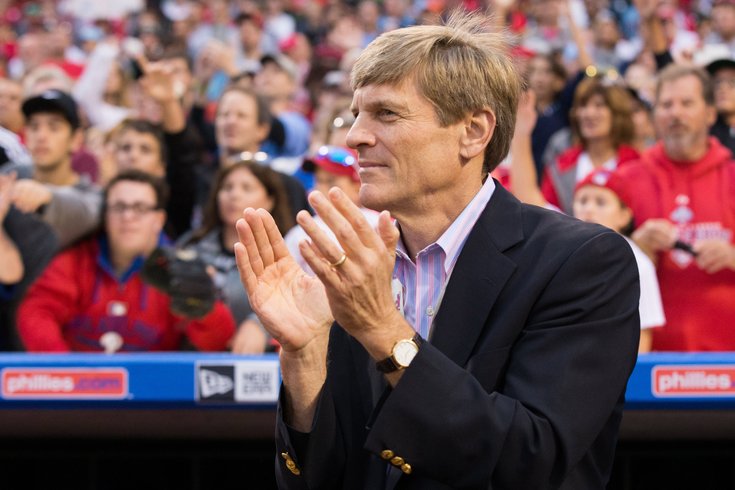 Last week, Phillies president Andy MacPhail said that "money is not the issue" when it comes to adding a free-agent pitcher this offseason. The team is currently looking to take its rebuild to the next step – actually playing meaningful baseball come September – but from top to bottom, they've reiterated the fact they don't plan on throwing money around just because they have it.

As MacPhail put it, they won't do anything "impulsive."

Similarly, general manager Matt Klentak said last week that the team will remain "disciplined" in free agency. And manager Gabe Kapler, in his first year on the job, put his faith in the current players, saying that "if everybody on our roster takes a small step forward, we have an opportunity to shock people."

However, it's worth pointing out that whatever money would be spent on a potential free-agent signing isn't actually their money. So while MacPhail can say that money is no concern, he's not actually the one writing the check.

And on Thursday, it was John Middleton's turn to address the media. His message? Nearly identically to what the his manager, GM and team president had to say last week: "We're not going to go out and do something stupid."

So what would qualify as "something stupid?"

Like MacPhail, Middleton isn't worried about the money. It's about the years. Specifically, how many years they're going to be forced to pay that money – and whether or not it could hamper future efforts in free agency.

"We don't want to sacrifice something significant in the future by making a short-term move," Middleton said, according to MLB.com. "Whether it's a trade or a signing, if we get the deal we think is right, we'll do it. We'll pull the trigger. Money is zero object. No object whatsoever."

This isn't just a team philosophy; we're seeing it in action right now as the team reportedly pursues right-handed starter Jake Arrieta, the top remaining pitcher on the free-agent market. The Phillies can most certainly afford the soon-to-be 32-year-old former Cy Young winner, but by all accounts, Arrieta's camp is looking for something more long-term than the team is willing to offer. Of course, they could try to entice him by offering more per year than he would get in a six-plus year deal.

The Phillies reportedly remain in discussions with Arrieta's agent, Scott Boras, but according to MLB.com's Todd Zolecki, they're nowhere close to a deal because the team is unwilling to make the kind of long-term commitment that Arrieta is seeking. And that may cause Middleton and the Phillies to look elsewhere.

Sources have told MLB.com that the Phillies are open to a three-year contract for free-agent right-hander Jake Arrieta, but they have been unwilling to make a six- or seven-year commitment to him, which reportedly is what Arrieta wants. In other words, little has changed between the Phillies and Boras, despite discussions throughout the offseason.

"It's hard to characterize it at this point," Middleton said about the team's chances of finding a starter before Opening Day. "It's not so remote that you'd say no, there's really no chance. But I would tell you we're not just looking at free agents. We're talking to teams about trades, because there are players that we would trade for.

"Beyond that, I would tell you, whether we get it done before the start of the season or we do it during the season, I'm hoping we're playing so damn well by early July that I get to look at Matt and say, 'Matt, we're in the hunt now. What the hell are you going to do come Trading Deadline to get us over the hump?' If we're there, my guess is Matt will probably look at everything a little bit differently, as I think he should."  [mlb.com]

That wouldn't be the worst problem to have.

And, while it's beginning to sound less likely that Arrieta is in red pinstripes this season, there are a few positive takeaways from Middleton's comments:

•  It seems that everyone, from Kapler on up to ownership, is in agreement about the organization's vision for how the rest of this rebuild should play out. And, while they remain optimistic about the 2018 season, they're smart enough to know that nothing this season is worth mortgaging the future. That time may come, but it's not now.

•  Despite their desire to add starting pitching help, the Phillies seem perfectly content heading into the season without any more big splashes in free agency. As MacPhail said last week, "The other mistake other people make is – this isn't the only chance you'll ever have to improve your team."

•  And when the time to make a move does arrive, ownership seems to trusts the front office to go out and spend wisely. Zolecki even pointed out that Boras has been known to call an owner or two to try to get the ball rolling. When asked if he'd heard from Boras, Middleton said no, and that if he had called he would've told him to contact Klentak instead. Middleton also admitted that he, Klentak and MacPhail talk a lot, but it doesn't sound like he's necessarily advising those two on any potential personnel moves.

Of course, all this could change after a couple Spring Training games, once they see how their current crop of starting pitchers fare against actual opponents.