What they're saying: How much should Phillies be willing to pay for Arrieta? 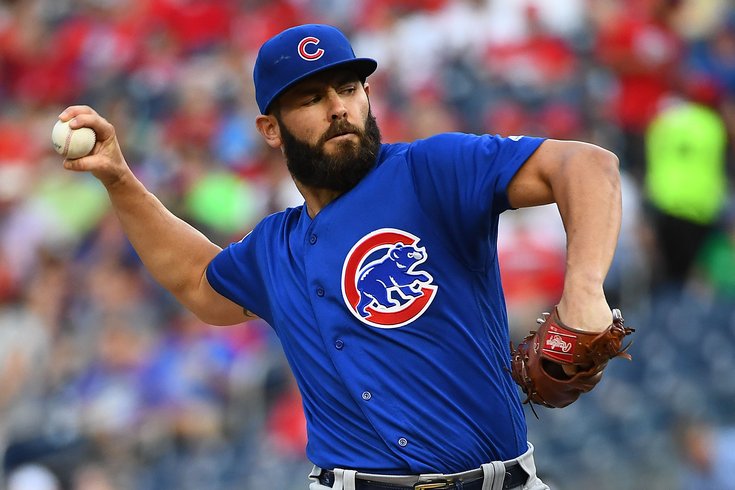 Free agent starting pitcher Jake Arrieta during a 2017 game with the Cubs.

The Phillies play their first exhibition game of the spring on Thursday, and even with a new (and very different) manager in Gabe Kapler and a big-name bat in free agent Carlos Santana, much of the noise around the team has had to do with things going on outside of their training complex in Clearwater, Fla. – namely, whether or not they will add a top-of-the-rotation starting pitcher.

In recent days, the news has been that the Phillies are in discussions with righty Jake Arrieta, arguably the top remaining option in this year's free-agent pitching class. On Tuesday, Jon Heyman of Fan Rag Sports reported that the two sides were "having dialogue," but differed on the number of years involved in any potential deal.

As we previously wrote, the Phillies have the money, but they may not want to handcuff themselves in the future by committing top dollars to a soon-to-be 32-year-old pitcher, even if he won the N.L. Cy Young in 2015.

So what might the Phillies be willing to pay for Arrieta? And will that be enough to lure the former Cubs and Orioles starter to Philadelphia?

That's where we'll start today's edition of what they're saying about the Phillies. And if you prefer to read about the players who are actually in camp already, fear not; we've got quite a bit of that as well.

This seems around the maximum, both in terms of years and dollars, that the Phillies should be willing to go. If they need to extend it to a fourth year, that's fine too, assuming they lower the per-season average.

If Philadelphia offered something in the the range of a three-year, $82.5M contract, a deal could serve two masters:

-Arrieta would instantly become one of the five highest-paid pitchers per season on average. The only starters slated to make more than $27.5M in 2018 are Clayton Kershaw ($33.2M), Zack Greinke ($31.9M), David Price ($30M) and Justin Verlander ($28M). When factoring in position players, a $27.5M salary for Arrieta would place him among the top 10 highest paid in the sport.

-Keep Philadelphia's long-term payroll sheet clean. It's no secret that the Phillies will be in the market for free agents like Bryce Harper and Manny Machado next winter. With per-year salaries that could jump over $40M for upwards of 10 years, it makes sense for the Phillies to want to be smart about long-term deals now.  [nj.com]

Thanks to a changing market for starting pitchers, the Phillies might not even need to spend that much. Again, however, it all comes down to how many years Arrieta is demanding.

[Agent Scott Boras] wants Arrieta to receive the type of money that Yu Darvish earned earlier this month from the Cubs. The Phillies will not match that six-year, $126 million contract, but perhaps that could give Arrieta a similar average annual value — $21 million — but half the years.

Arrieta has been a victim of a market for starting pitchers that has shifted dramatically over the last few seasons... Teams no longer throw money at average or slightly above-average pitchers, and they do not throw the type of money at the elite arms they once did. Starting pitching is a risky investment, as teams know the success of the deals will likely fall short. And that thinking could help the Phillies as they try to land a proven elite pitcher on a contract length more suited for an average arm.  [philly.com]

See, what had happened was...

Ted Berg | For The Win

New manager Gabe Kapler is going to have a fun time explaining this one to Hertz when he goes to return his rental car.

Nick Williams, a 24-year-old outfielder who spent the second half of the 2017 season with the big-league Phillies, on Monday joined in on the longstanding Major League tradition of damaging cars with batting-practice homers in spring training.

Nick Williams hit Gabe Kapler's SUV with a batting-practice homer today. “I would trade a Nick Williams home run for a dent in a rental car, any day of the week," Kapler said.

Though the frequency with which spring-training batting-practice homers hit nearby cars mostly speaks to the layout of spring-training complexes and how people really need to stop parking their cars just past the home-run fences, hitting a car — especially the car of someone notable in the organization — is an important part of many young ballplayers’ origin stories.  [ftw.usatoday.com]

Over at the Sporting News, they listed three things the Phillies need to do this season. This first one might be just as much on J.P. Crawford as it is on Kapler...

1. Commit to Crawford (or not)

J.P. Crawford may be as good defensively as a Francisco Lindor or Andrelton Simmons, but like with Simmons, there is fear about his bat, and if a player can't hit he loses his spot.

Crawford batted .214 in 23 MLB games last year and .243 in 127 games at Triple-A. After batting no worse than .285 in his first three minor league seasons, Crawford has failed to eclipse .250 over his last two years. Will he hit enough to be an everyday player? Will the Phillies give him a chance to find out at the start of the season?  [sportingnews.com]

If you're a fan of overpowering fastballs, this guy is for you.

A top-10 prospect in the Phillies farm system, his killer fastball and above average curve and change up give him big-league stuff. He had a 2.83 ERA across Single and Double-A last season compiling 121 strikeouts to 52 walks in 24 starts. In a wide open battle for roster spots among the Phils' young pitchers, Kilome could improve his likely Triple-A land spot and make an MLB rotation case.

"That's part of being a baseball player," Kilome told Metro this offseason. "You have to be patient."  [metro.us]

It seems like the Phillies really want to find a spot for Scott Kingery. And they might have found more than one.

Kingery will get some time at third base as well as potentially shortstop and center field this spring, The Athletic reports.

The Phillies' incumbent second baseman, Cesar Hernandez, has been one of their better players over the last few seasons, so the Phillies won't want to bench him to make room for Kingery. His easiest path to playing time may be at third base, where Maikel Franco has disappointed at the big-league level. Increasing Kingery's flexibility will give him multiple routes to major-league playing time, and while he still appears unlikely to break camp with the Phillies, he should be up at some point in the middle of the season and will have the ability to receive starts at several different positions.  [cbssports.com]

Speaking of Cesar, the Ides of March will be here before you know it...

Galvis, at age 26, arrived at spring training a year ago as a confident and established player. He had hit 20 home runs in 2016, and you could have chopped off your left hand and two fingers on your right one and still counted the number of shortstops who were better than he was defensively. In a clubhouse occupied by a high number of players from Latin America, Galvis also grew comfortable in the role of leader.

None of that prevented the Phillies from trading the shortstop, because they wanted to make room for J.P. Crawford, the organization’s top-ranked prospect by Baseball America who graduated to the big leagues last September.

Hernandez, 27, finds himself in an almost identical position to Galvis in 2018. It could be argued that he, too, has arrived as a player at around the same time the Phillies could be ready for his departure. Nobody is saying that, of course, for a number of reasons.  [philly.com]