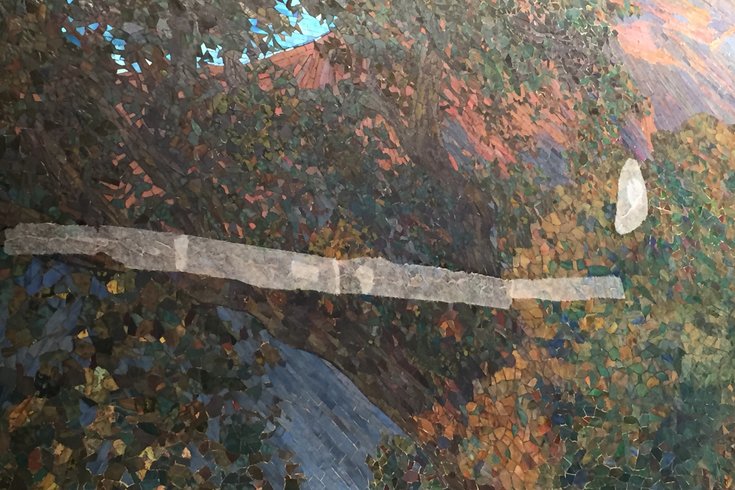 A crack, treated to prevent further damage, can be seen on the facade of Dream Garden, a mural in the lobby of The Curtis Center that is said to be priceless.

A $25 million renovation project at The Curtis Center has damaged a priceless glass tile mural, according to its owner.

David Brigham, president of the Pennsylvania Academy of Fine Arts, which owns "Dream Garden," said that vibrations from construction activity on a stairwell opened up a crack in the 15-by-49-foot mural that spread along a seam between panels on the left side of the piece. Eleven of the intricate glass tiles were loosened and two panels shifted out of alignment, he said.

"Dream Garden," constructed of more than a hundred thousand pieces of hand-blown favrile glass tile in 260 colors, created specially for the mural under the supervision of Louis Comfort Tiffany. Created by American artist Maxfield Parrish,  30 artisans worked six months to install the work before its completion in 1916.

The mural was installed in panels, Brigham said. 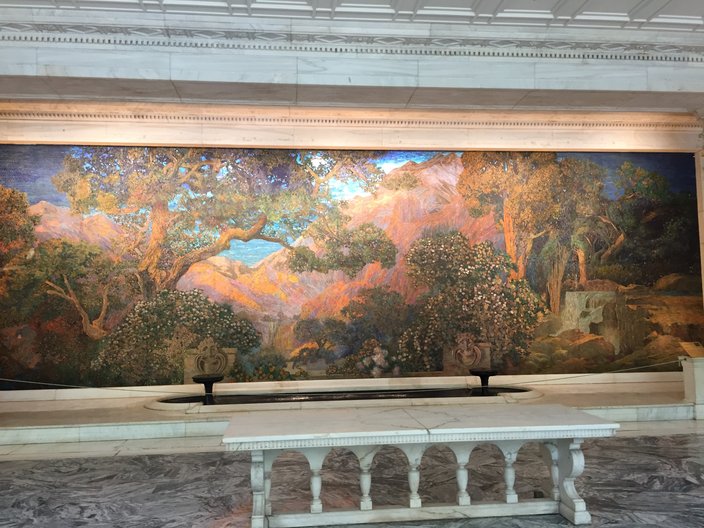 "[Construction] opened up a seam," he said Tuesday. "The seam was more vulnerable than other parts of the mural."

On Monday, the city's Department of Licenses and Inspections announced that they had shut down work at the building, in order to protect the piece. But L&I spokeswoman Karen Guss said Monday that work was stopped before any damage was done and said that cracks seen on the mural were pre-existing.

But Brigham said PAFA had sensitive monitoring equipment installed last fall to keep tabs on the mural. When demolition work started at The Curtis Center in January, PAFA started seeing breaches of the tenth-of-an-inch-per-second vibration threshold put in place to protect the artwork.

Crews exceeded the "vibration velocity" on five occasions, according to Brigham. The last breach occurred on June 30, and soon after, the PAFA discovered the new damage to the mural.

"They created a crack," he said.

"As committed stewards of history and active investors in The Curtis and surrounding Independence Mall properties, we have taken great care to preserve the beauty and history of the local architecture, as well as the Dream Garden mural. We will continue to take every necessary precaution to ensure that all of the unique and historic features of our buildings are fully maintained."

Brigham said the cracks have been treated with a material intended to prevent further damage, but PAFA is still determining what it will take – and just what it will cost – to repair the damage. Meetings will be held over the next two weeks to determine what can be done to repair the piece, Brigham said.

"We are going to put additional protective measures in place," said Brigham. "It's a historic masterpiece and we have to protect it."