Just a few days away from the start of the Eagles season Monday night in Atlanta, Philadelphia fans are rightfully optimistic about the team's prospects to legitimately contend for a championship.

Meanwhile, the countdown to Pope Francis' visit to Philadelphia is winding toward two weeks.

What do these events have in common, other than religion? Well, papal visits = professional sports championships, according to a historical, semi-pseudoscientfic review by e-marketing analytics firm MAASSMedia.

As demonstrated in the table below, ten papal visits to the United States in several cities have yielded ten championships among franchises in those cities the following year. 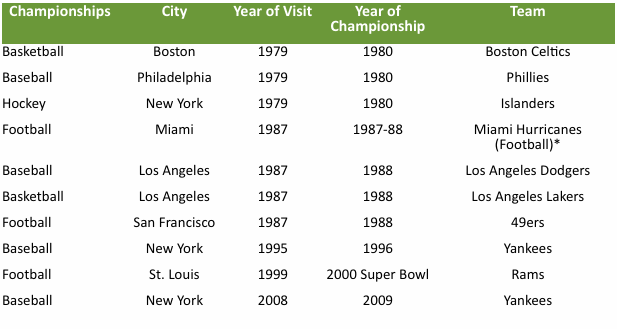 
In 1979, Pope John Paul II visited Philadelphia and all four major sports teams went to their respective championships the following year. Only the Phillies won, claiming their first World Series, but still there's something compelling about such an improbable relationship.

This time around, even if it's completely wishful thinking, an odd trend like this can only help an already impressive squad and its fans keep the positive mental attitude going through the rigors of the NFL season.

In case you missed it, here's the team's hype video narrated by Brian Dawkins.