Penguins 4, Flyers 1: Chance to climb back in playoff position squandered 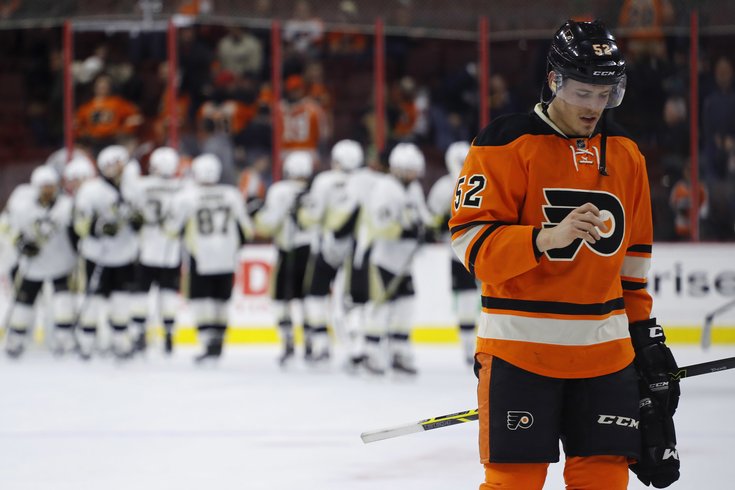 Philadelphia Flyers' Nick Cousins skates off the ice after his team's loss to the Penguins on Saturday.

The law of averages suggests that the Philadelphia Flyers, 8-1-1 in their previous 10 games, were due for a loss at some point in the near future. But the laws of qualification for the NHL playoffs would suggest that Saturday’s game against the Pittsburgh Penguins was not the one to lose.

Thoroughly outplayed for most of the game, the Flyers, winners of eight of their last nine against the Penguins, allowed four unanswered goals — and it could have easily been more — on their way to a 4-1 beatdown at the Wells Fargo Center.

Here’s more on the game, starting with its huge playoff implications.

•    PLAYOFF UPDATE: The Flyers (34-24-12) had a chance to climb back into a tie with the Detroit Red Wings, who were a point ahead entering play Saturday, for the second Eastern Conference wild-card spot with a win, one that would have also inched them closer to the Penguins.

Instead, Dave Hakstol’s team, which was 8-1-1 in its previous 10 games, remains on the outside looking in with 11 games remaining in the regular season. Luckily for the Flyers, three of those games will come against Detroit (1) and Pittsburgh (2).

•    The Flyers got on the board first when Radko Gudas — yes, again — found the back of the net two minutes into the second period.

Not that we’re complaining, but when did he become such an offensive juggernaut?

•    Although the arena was hopping at the start, the Penguins did an excellent job of neutralizing that advantage, especially in the second period. Any momentum the Flyers gained from Gudas’ goal was quickly erased as Trevor Daley tied the game 61 seconds later. The Penguins added two more (Carl Hagelin and Chris Kunitz) in a 90-second span late in the period to take a 3-1 lead into intermission. They would add an empty net goal late in the third to make it the 4-1 final.

•    Despite a few good scoring chances early, the Flyers didn’t do much to test Pens goalie Marc-Andre Fleury. Through two periods, they had just nine shots on goal and finished the game with 17, their lowest total of the season. And even when they did have Fleury beat, they struggled to score.

Fleury had been snakebitten recently against the Flyers, but when you only finish with 17 shots, you make it quite easy on the opposing goaltender. If you remember, the Flyers put up 23 shots in the first period alone in Tuesday's win over the Red Wings.

•    Steve Mason wasn’t as fortunate as his Pittsburgh counterpart. He stopped 32 of the Penguins’ 35 shots in all, including a few breakaway attempts like this.

Mason with a big stop on the breakaway chance pic.twitter.com/QqLL7nAcaA

Despite the outcome, Mason played very well and was without a doubt the best Flyer on the ice -- not that he had much competition. Had it not been for him, the game could have been even more lopsided.

Furthermore, Mason wasn't even scheduled to get the start. Michal Neuvirth was taken out of the lineup just 20 minutes before the game, Mason told reporters in the locker room. What's wrong with Neuvirth? As expected, the Flyers aren't giving up a whole lot of info...

Ron Hextall on if Michal Neuvirth is sick or injured: "We will know tomorrow."

•    One silver lining to take from this game — if that’s your sort of thing — is the fact that the Flyers were able to keep Sidney Crosby in check for much of it. He finished with a pair of assists, one of which came late on the empty-netter, and three shots.

•    The Flyers penalty kill unit continued to play well, stopping all three of the Penguins power plays. They had killed 13 of 14 coming into play. On the other hand, their power play unit was atrocious on Saturday. They finished the game 0-for-3 and it often seemed like Pittsburgh was the team with the man advantage despite them being down a player.

Meanwhile, the Penguins had two shots of their own on goal during the Flyers’ three power plays.

•    Given the return of Jake Voracek, who is a huge part of the first line on that unit and missed the last nine games with a foot injury, the Flyers struggles on the power play were somewhat surprising. The forward may still be getting back in rhythm, so we'll give him a pass on this one. He finished with just one shot in 13:46 ice time.

With the NCAA Tournament coming to the Wells Fargo Center next week, the Flyers will hit the road for four games before returning to face the Jets on March 28. Here's a look at their upcoming schedule.