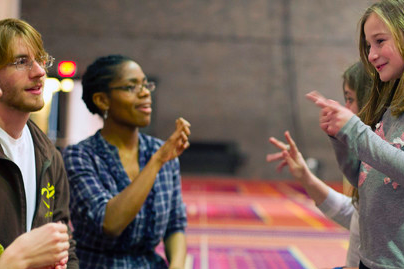 Every region has a vernacular that displays the characteristics and quirks of the people who make up its communities. In Philadelphia, we don't blink when we say things like hoagie, jawn and pocketbook because they're part of our vocabulary and refer to things and concepts we readily grasp.

But is Philadelphia's identity so strong that it actually has a distinct "accent" for American Sign Language (ASL) – which relies on finger-spelling, facial expressions and body postures?

Jami Fisher, a Linguistics professor at the University of Pennsylvania, believes the evolution of deaf education in the United States may have produced a unique dialect of ASL that can be documented today through a series of interviews with members of Philadelphia's deaf community, according to Phys.org.

Fisher, together with Meredith Tamminga at UPenn's Language Variation and Cognition Lab, plans to conduct lengthy video interviews with 12 deaf individuals both young and old to sort through five decades of subtle morphology in Philadelphia's ASL.

"Philadelphia ASL historically, and I think anecdotally, has always been seen as a little different," Fisher said. "We're not really sure why."

For Fisher, whose parents and brother are deaf, the research project is both personal and academic. Randy Fisher, her father, will be the man conducting the 12 video interviews, whose laborious annotation process will take up to two hours for every minute of signing captured. Fisher and Tamminga hope that Randy's involvement will help ease and naturalize the interview process.

Part of the pair's hypothesis is that the status of deaf education in the U.S. before the appearance of the Individuals with Disabilities Education Act in the 1970s led to a more localized learning experience at boarding schools. Between 1820 and 1892, deaf children in Pennsylvania were sent to boarding schools where they interacted primarily with deaf peers, both adults and children. Since then, the deaf population has been assimilated into more mainstream schools, diminishing the influence of distinct forms of expression.

"You no longer had this setting with deaf adults in particular, deaf peers, exposing deaf children to the language, but also to these cultural traditions and norms," Fisher said.

To complete their investigation, Fisher and Tamminga have received a $10,000 one-year Research Opportunity Grant from UPenn's School of Arts & Sciences. They plan to publish their findings along the way and eventually turn their work into a publicly accessible online resource that will serve deaf communities both locally and beyond.