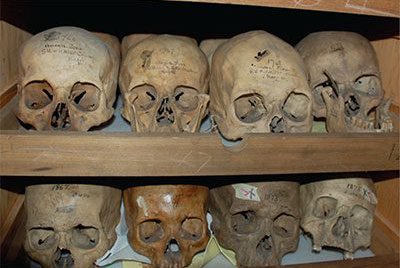 The Samuel G. Morton Cranial Collection has been housed at the Penn Museum since 1966, but was moved to storage amid a student-led effort to repatriate and rebury the human skulls. The collection was used by Morton in the 19th century to support white supremacist theories of racial intelligence based on cranial capacity.

The Penn Museum at the University of Pennsylvania has reached a decision to repatriate or rebury a collection of human skulls from the 19th century, some of which belonged to enslaved people and were used to illustrate false white supremacist theories.

The skulls had comprised the Samuel G. Morton Cranial Collection, named for the Philadelphia-based physician and natural scientist who specialized in craniometric analysis. Morton's research claimed that the skull capacity of Caucasian people, compared to other races, offered evidence of a racial hierarchy of intelligence.

Debates about the integrity of Morton's data collection methods became a subject of fierce academic debate in the 20th century. Renewed attention to the subject, much of it led by Penn researchers, ultimately found analytical bias in the conclusions Morton drew from his measurements, especially in the context of similar scholarly work led by German anatomist Friedrich Tiedemann, a contemporary of Morton's.

Tiedemann had argued that using craniometric data in support of theories of racial inferiority was not only scientifically unfounded, but clearly driven by prejudice.

The Penn Museum took the Morton Collection — about 1,300 skulls in all — from the Drexel Academy of Natural Sciences in 1966. When a group of students came forward in 2019 to challenge their display, the skulls were placed in storage in the museum's Physical Anthropology section.

A committee formed by the museum — composed of leadership, staff, anthropologists and students — worked to evaluate steps for repatriation and reburial.

"The Penn Museum and the University of Pennsylvania apologize for the unethical possession of human remains in the Morton Collection," said Dr. Christian Wood, director of the Penn Museum. "It is time for these individuals to be returned to their ancestral communities, wherever possible, as a step toward atonement and repair for the racist and colonial practices that were integral to the formation of these collections. We will also reassess our practices of collecting, stewarding, displaying and researching human remains."

The museum will look to rebury the remains of the Black Philadelphians in a historically Black cemetery in the city. Remains from other locations will be repatriated in consultation with local communities to determine their wishes. The process will be modeled after the Native American Graves Protection and Repatriation Act, which has a 30-year track record for handling such remains.

"There is no 'one size fits all' approach to handling repatriation and reburial in any circumstance," Dr. Woods said. "Each case is unique and deserves its own consideration. This is incredibly sensitive work. And while we all desire to see the remains of these individuals reunited with their ancestral communities as quickly as possible, it is essential not to rush but to proceed with the utmost care and diligence. As we confront a legacy of racism and colonialism, it is our moral imperative to do so."

Moving forward, the Penn Museum will work with the School of Arts and Sciences to create a new full-time faculty position for a BIPOC bioanthropologist, who will have expertise in the analysis of human remains with a record of advocacy for Black and Indigenous matters in repatriation requests.