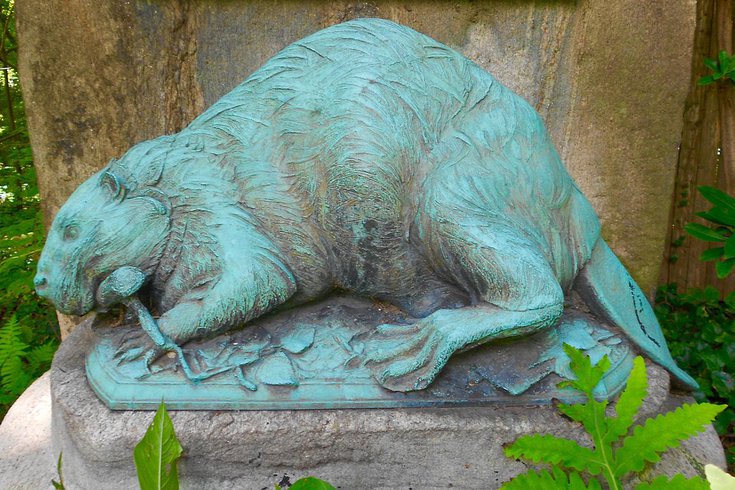 'Bronze Beaver' is the work of the late Philadelphia artist Albert Laessle. It was installed along with a historical plaque in Rose Valley Borough in 1926 to commemorate 'The Great Minquas Trail' and its role in the fur trade between Native Americans and European settlers. The statue and plaque were stolen some time between Sunday, April 4 and Monday, April 5.

Rose Valley Borough is offering a $5,000 reward for the recovery of a beaver statue and historical plaque commemorating a fur trading route that dates back to the 17th century.

Pennsylvania State Police said Tuesday the statue and plaque were stolen from the tiny Delaware County town, located less two miles south of Media, some time between 5 p.m. Sunday and 5 p.m. Monday. The display is located near Rose Valley Road and Traymore Lane, close to the Thunderbird Lodge.

Anyone with information regarding the theft of the Minquas Indian trail marker, being a 1926 Bronze Beaver & plaque are encouraged to contact PSP at 484-840-1000. A $5,000.00 reward is being offered by Rose Valley Borough for the recovery of these pieces. @PACrimeStoppers pic.twitter.com/iwbYfPjHoB

The statue and plaque honor the "The Great Trail," also known as "The Great Minquas Path," which ran 80 miles from the Susquehanna River in Lancaster County to the Schuylkill River in present day Philadelphia. They were both installed in 1926.

Dutch settlers named the trail "Beversreede" ("Beaver's Road") and it functioned as part of a larger zone of trade between Native Americans on the Susquehanna River and European traders on the Schuylkill and Delaware Rivers.

In Philadelphia, the Great Minquas Path is recognized with a historical marker to honor Printz's (Old Swedes) Mill, built along the trail in 1645 during the era of New Sweden Colony, whose territory was eventually claimed by the Dutch and later by William Penn.

The bronze beaver sculpture is the work of Albert Laessle, a sculptor and animalier who taught at the Pennsylvania Academy of Fine Arts. His famous works in Philadelphia include the "Billy" goat sculpture in Rittenhouse Square and his "Bronze Penguins" sculpture at the Philadelphia Zoo.

The inscription on the stolen plaque reads as follows:

Minquas or Susquehanna Indians — Susquehanna to the Schuylkill crossed Ridley Creek at Long Point 484 yards to the south. Thousands of beaver skins yearly were carried down to the first Dutch and Swedish Settlers on the Delaware.

Anyone with information about the stolen items is asked to contact Pennsylvania State Police Trooper Jennifer Paulin at (484) 840-1000 or by email at jpaulin@pa.gov.