As a city planner and a bit of a research fiend, Ken Steif said he knew what he was going to do when City Council proposed zoning legislation for Pennsylvania's future medical marijuana dispensaries.

Steif, the director of the master's degree program in Urban Spatial Analytics at the University of Pennsylvania, who also teaches courses in the school's city planning department, said he's fascinated by new land laws appearing in places across the country. Newly developed technologies and policy changes – like drones and self-driven cars and changes to marijuana laws – are forcing cities and communities to rethink how they do things.

"There's no sense of how those changes will play out," he said. "The end result is often what some might say is overregulation, but what I think is completely reasonable."

Gov. Tom Wolf officially made medical marijuana legal in April, but the state's programs won't be implemented until 2018. This gives officials some time to develop those new regulations.

State law already prohibits dispensaries from being located within 1,000 feet of any public, private or parochial school or a daycare, as outlined in Senate Bill No. 3.

Since then, the Pennsylvania Department of Health has also listed additional temporary regulations for dispensaries that would prohibit them from opening up in malls or a doctor's office.

Philadelphia City Council also weighed in on the issue. While still proposed, legislation introduced by Derek Green would no dispensaries within 500 feet of pools, parks, convention centers, hotels, playgrounds, recreation centers and more.

So given the state's current law and the city's proposed legislation, and with some help from OpenDataPhilly, Steif gave Philadelphians a little taste of what could be with a zoning map that shows definite scarcity for future spots.

While he wouldn't give an opinion on the results, Steif said he hopes the data will encourage others get in touch with councilmembers if they agree with the regulation, or not.

"There's so much incredibly valuable data," he said. "Hopefully stuff like this will inspire others to pursue data in what they're interested in."

Steif published his results plus a few thoughts on Urban Spatial, a website he founded in 2014, the map can be viewed below. 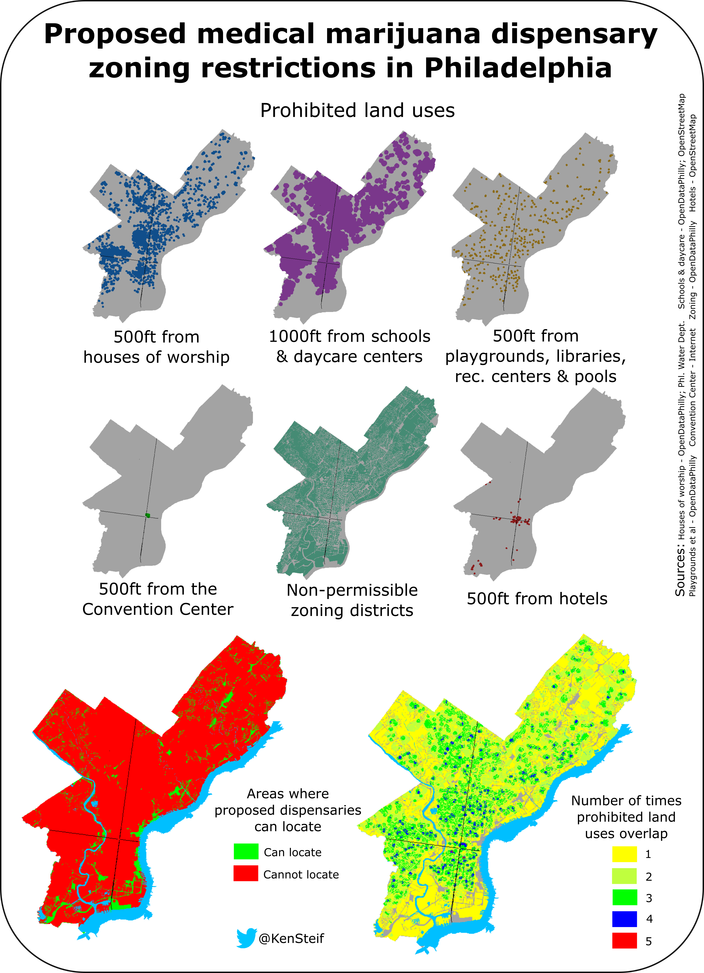